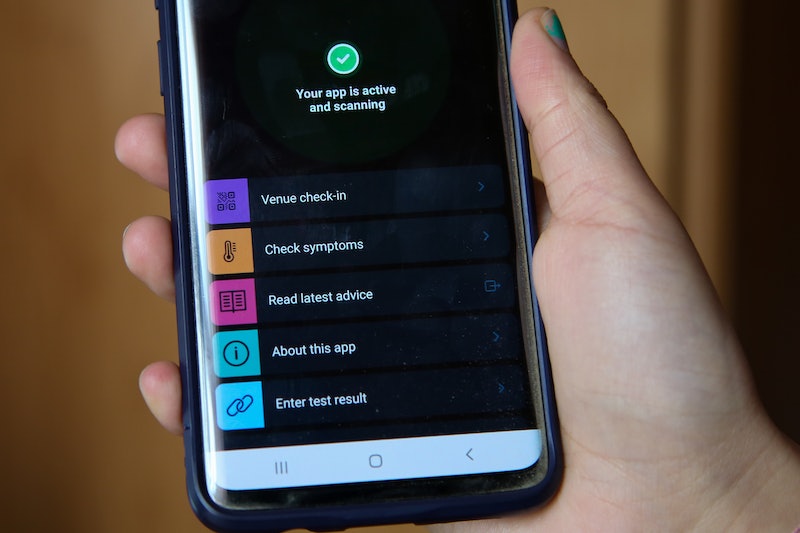 Since its launch on September 24, the NHS COVID-19 Test & Trace app has left many of its users in a constant state of confusion. Is this part of the government’s contact tracing scheme, or is it a separate thing entirely? Do I have to download the app? Who on earth is NHSX? If you’re struggling to get to grips with the app and what it actually does, here’s a guide on how to use the NHS Test & Trace app.

What is Test & Trace?

Test & Trace is a service run by the NHS to “help control the rate of reproduction (R), reduce the spread of the infection, and save lives” according to the government website.

When you book a test, you have to register with the Test & Trace service in order for the NHS to give you your results via text, phone, or email (from their number, 0300 0135 000).

If your results come back positive, contact tracers will ask you to “share details of people with whom you have had close, recent contact and places you have visited” online through a secure website or over the phone.

How does the NHS app work?

Developed by the innovation arm of the health service, NHSX, the NHS COVID-19 Test & Trace app is a separate part of the overall service and is designed to be "the fastest way to see if you’re at risk from coronavirus."

The app enables you to check symptoms, enter test results, check in to venues with a QR code, and read the latest advice. It can also detect other app users through Bluetooth, so if you are close enough to someone for over 15 minutes and one of you subsequently shares a positive coronavirus test via the app, then the other will receive an alert to self isolate. If someone at a venue you’ve recently checked in to is positive or the venue itself is subject to an outbreak, you’ll receive a similar notification to self-isolate.

Initially planned to launch in mid-May after being trialled on the Isle of Wight, the first iteration of the app was abandoned after it focused too heavily on a “centralised” approach on storing data. Instead, the government shifted gears and developed the app with technology provided by Apple and Google — something they were against originally.

Through this technology, personal information and data are stored on individual phones rather than a central server, according to Wired. The personal data shared includes your postcode, symptom information, QR code data, and the codes generated for the Bluetooth contact tracing system. The NHS has also made it clear that “no third-party trackers that can gather people’s personal information have been added to the app.” It won’t share who you are or your location with authorities, either.

Per the New Scientist in May, human contact tracers are not given the information inputted by users directly. “People who use the app, they have symptoms, they are invited to take a test, a test is sent to them,” John Newton at Public Health England said. “If they test positive that data goes straight to Public Health England and that gets them into the [traditional] contact tracing system.”

This may change in the future, however, as Wired notes that the app’s privacy policy states that “an option being considered is to allow app users the choice to send data held on their phone to contact tracers.”

The app is available to download on both iOS and Android devices, though you’ll need to have a specific generation of smartphone as well as up-to-date software. For iOS users, this means you must have an iPhone 6S or later running at least iOS 13.5. For Android users, this means you’ll need a phone running Android 6.0 or later, although not all models are compatible as BBC News reports.

To download the app, open the App Store or Google Play depending on your device and search ‘NHS COVID-19’. Click install, and enter your passcode/Face ID/Touch ID if prompted. The app is free to download, and you must confirm you are 16 or over before inputting your postcode.

You’ll also need to make sure you enable permissions for the app through your phone’s settings. It requires permission to use the camera, notifications, and Bluetooth to operate — the app will prompt you to the right page in settings when you open it for the first time.

How to use QR codes

You may have noticed recently that a number of venues have put up QR codes at their entrances. This is so you can check in on the app so you can be notified if there’s been an outbreak at a venue you’ve recently visited. It will also remind users “that if they are feeling unwell they should use the app’s symptom checker.”

To check in, all you need to do is tap on the “Venue check-in” tab which will then open your phone’s camera. Proceed to point at the QR code displayed, and the app will successfully check you into the venue. You’ll be automatically checked out of the venue at midnight, or when you scan another NHS QR code.

What sort of alerts are there?

Whenever you open the app, you’ll immediately see an alert for your postcode at the top of the screen. These range from low, medium, and high and correspond to the measures put in place by your local authority. If the risk level changes, the app will provide advice regarding what actions you need to take.

If you’ve been in close contact with someone who has tested positive, the NHS will send an anonymous alert detailing what you need to do next. This is based on an algorithm, “but generally means you’ve been within two metres of someone with coronavirus for 15 minutes or more” according to the NHS. If you’ve been advised to self-isolate, the pulsating green dot saying your app “is active and scanning” will change to a red self-isolation countdown timer.

There’s also an alert of sorts if you believe you have symptoms. By using the symptom checker, the app can alert and advise you to self-isolate for 14 days and get tested, which you can now book via the app.

Have there been any issues with the app?

On launch day (Sep. 24) the NHS app was already facing problems, with many left unable to use the app despite the NHS and government saying it was ready to download. In the weeks following, many users experienced false alerts and notifications as well as positive test results not being logged properly. On Oct. 13, it was found that the app was getting confused with Apple and Google’s own exposure notification technology, alerting users with “phantom messages” as BBC News reports. The NHS has since fixed the issue, which was found to be a “default privacy notification.”

According to Sky News, the app has also only sent one alert about an outbreak in a venue since it launched in September even though 480,000 businesses have reportedly downloaded QR posters and 1.5 million users checked into venues in a single day.

Another problem that has arisen re checking in at venues is that, due to the fact that the app stores check-in data locally, if users do receive an alert, they aren't told which venue the outbreak took place at. Per Sky News, the message simply reads: “We are letting you know that you may have been exposed to coronavirus when you were out.”

Public health officials are also unable to look at which venues have had outbreaks due to the “privacy-protecting design” of the app. “If it’s all done through the app and Public Health England and the local public health teams don’t know anything about it, is it making the outbreak worse?” Paul Hunter, professor of health protection at the University of East Anglia asked (via Sky News). “It could be acting to hide clusters and outbreaks from local public health teams.

“If that is happening then that is a really serious problem and will undoubtedly make it more difficult to control the epidemic.”

More like this
Meet The Rugby World Cup Breakout Star Making The Sport More Inclusive
By Shahed Ezaydi
8 TikTok Accounts Every Royal Fan Needs On Their FYP
By Kira Richards and Frances Stewart
How “Goblin Mode” Came To Be The Oxford Word Of The Year
By Sophie McEvoy
Everything You Need To Know About Dabloons, TikTok’s New Currency
By Catharina Cheung
Get The Very Best Of Bustle/UK

This article was originally published on June 23, 2020