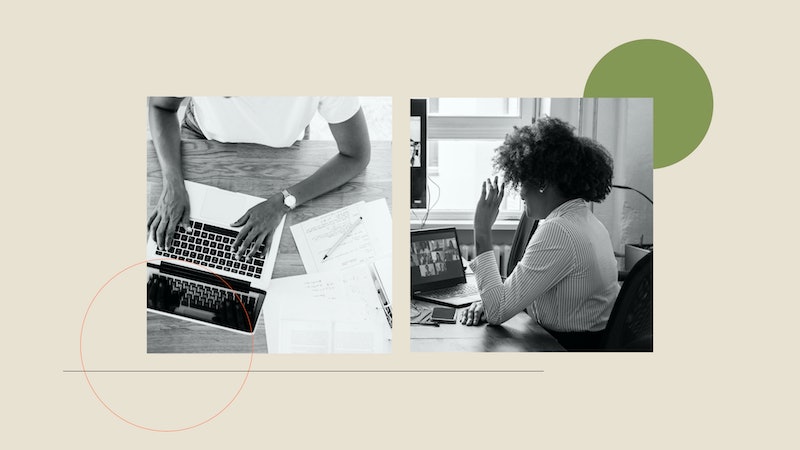 Although I’m lucky enough to work for two wonderful online publications who have helped me grow as a writer and believe in my voice and ideas, my journey into journalism wasn’t an easy one. When you’re a Black woman from a lower economic background, penetrating this industry is a challenge – and I know I’m not alone in my experience. Young Black journalists across the UK aren’t getting to shine the way we deserve, missing out on opportunities to our white counterparts. While we account for almost 4% of the population, only 0.2% of journalists are Black. How can we accurately report on the world when the industry doesn't even reflect it?

For the majority of the pandemic, I’ve been working on a BBC Radio 4 documentary to discover just that: why aren’t Black people represented in journalism? How do you even get your foot in the door? And, better yet, how do we retain and move up the seemingly impossible ladder where the real decisions are made? I spoke with Liv Little from gal-dem Magazine, Nadine White from the Huffington Post, Rianna Croxford of BBC News, as well as ITV News anchor Charlene White, academic Marcus Ryder, and the Managing Editor of the Evening Standard and The Independent Doug Wills, looking to find out exactly why Black journalists are so unrepresented.

The reality is that young Black journalists have to prepare themselves for white editors' cultural insensitivities, toxic work cultures, late payments, and the experience of being wheeled out just to tell trauma-filled identity stories. And, after all that, they will still have an uphill battle in securing a senior role. If recent creation of the “BAME” category at the British Journalism Awards shows us anything, it's that Black journalists are still a footnote in the industry.

Ahead of the documentary's release, I spoke to five young Black women about what it’s really like starting out as a journalist now.

For many Black journalists starting out, your beat is often writing about... well, being Black. While we do have a unique perspective of the world, writing about it often comes at the price of being pigeon holed, leaving you writing about pain and trauma. And the events of 2020 highlighted this even more.

The balance between wanting to accurately write about topics that affect Black people but not just writing about personal pain is a complicated line to toe when you first start out in journalism. Christine Ochefu, a writer and the regional editor at Black Ballad (a lifestyle platform that tells stories through eyes of Black British women) agrees, pointing out there’s a "massive encouragement for Black journalists to mine their personal pain for content," which actually led her to write a satirical article on the topic last year.

The reason why journalism desperately needs varied voices is to give a clearer picture of the world around us, and we as Black women have a unique viewpoint that is often underrepresented in media.

For Ochefu, her love of journalism stemmed from having specific knowledge of things that don't always get covered and publications like Black Ballad allow her to shine. "They're a small team," she says, "but they have managed to create something financially viable and still keep their integrity and values whilst concentrating towards serving a specific group – Black women."

But being able to use your authentic voice as a Black person isn’t always easy. As music and culture journalist Danielle Koku points out: “Loving Black culture in a white industry means you have to rework your words and ideas to sound palatable to an audience that doesn't look like you.”

“Most Black people I know got into journalism because they want to change things,” says Jess*, a young journalist who has worked in major newsrooms in London. The sad thing is, we're not being given the chance to do that.

Lee-Zogbessou noticed networking was different for her as a Black journalist. “Statistically there are fewer of us to go to when we need advice, or when we need opportunities or mentorships,” she explains. “I’ve had to go out and search for my own mentors and maintain those relationships all by myself because I'm not Tom from Oxford whose dad knows the editor of the Guardian.”

Shakira* who has worked in one of the biggest news rooms in the country, believes that as a Black woman “you’re made to feel like you should feel lucky to be here.” You’re often the only Black woman in the newsroom, which is ostracising in itself. On one occasion, Shakira ended up taking her complaints to HR after a colleague accused her of stealing, only for the HR team to dissuade her from making a formal complaint.

For Jess, the lack of support actually led her to leave the industry for a while. “I lost confidence in myself and became unsure." Luckily, she found her way back to journalism. "I realised it was what I wanted to do and I can’t be discouraged," she tells me.

Not All Editors Get It

While there are fabulous editors out there, and it’s their job to make our work the best it can be, the truth is the majority of editors in the UK are white, with 80% of them attending public school. This means, when you’re writing about lived experiences and identity, they might not always get it. Stories don’t always turn out the way you expect them.

“One time I wrote an article about intercultural dating as I’m both African and Carribean,” Lee-Zogbessou explains, “and they edited a section to imply that there was division in the African and Carribean community. It’s not something I had written at all, they had just added it. I didn’t feel like it was my own voice.”

And Ochefu has had similar experiences, telling me she often doesn't see final edits or headlines before a piece is published, ending up with potential “misrepresentative stories” under her name. She says this could leave her open to “a lot of criticism, or even harassment, especially as a Black woman.” We already experience a significant amount of gendered online abuse.

“It's a relationship about trust more than anything else,” says Koku. For her, a good editor is there to help become a better writer. But it’s often who you know that helps get you an in. She finds it tough pitching to editors she hasn’t worked with before. “It's hard to bother when you see the same names being commissioned over and over again or zero response to an idea that definitely suits a publication.”

It’s frustrating to see time and time again the mainstream media purposefully misrepresenting Black people. Lee-Zogbessou notes how differently Meghan has been treated in comparison to Prince Andrew, for example, and the amount of abuse footballer Raheem Sterling has faceD. “[Sterling] could buying his mum a house and he’ll be scrutinised," she says. "He proposes to his girlfriend and is called a rat.”

Mainstream media also seems to be behind the curb when it comes to reporting stories about Black people. “I've seen a lot of outlets write about music scenes, cultural trends and artists as if they are new and emerging,” Ochefu says, “when real listeners and Black audiences would already know they have been around and popular for decades.”

Luckily, this industry is getting a shake up. There’s an influx of incredible independent publications whose staff aren’t waiting for a seat at the table – they’re making their own. And inside larger organisations, Black journalists are making their voices heard. But we’ve still got a long way to go until journalism in the UK reflects the world around us.

My Name Is...Niellah is on BBC Radio 4 and BBC Sounds on Monday 31 August at 11am

*These names have been kept anonymous on request.