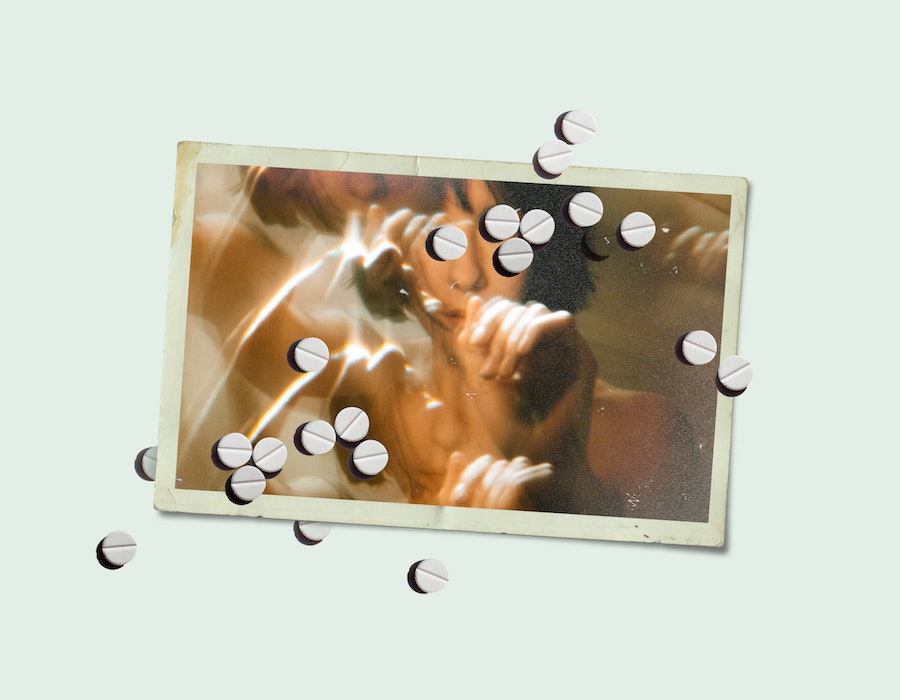 Thais Varela/Stocksy
By Anonymous, as told to Dana Smith
June 21, 2022
Sponsored
How to Feel Better

Me and My Meds is a new Bustle series exploring the way millennials relate to their mental health medications — the good, the bad, the ambivalent. Here, a 26-year-old Ph.D. student shares what it’s like to be on prescription drugs for anxiety and ADHD, and how the stigma feels worse for the latter.

I was always a worrier, even as a little kid. It was kind of a joke in my family — they called me a worrywart. I thought there was something wrong with me, and it was my fault for feeling a certain way or not performing a certain way. It was really destructive; there was a lot of self-blame.

In high school, I had a lot of panic attacks, especially during math tests, but anything that was a time-pressured test could trigger one. At the time, I didn't know I was having panic attacks; I thought I was having a heart attack or something.

That persisted in university as well. Whenever I had time-pressured tests, I would feel myself sweating. My breathing would get heavy, and every time I'd hear someone's page flip beside me, I'd think, 'Oh my gosh, I'm getting behind. I've got to speed up!' Everyone struggles with tests, but I was to a whole other level. Sometimes I would actually get sick — like, I would puke before the exams because I would feel so nervous.

It really peaked at the end of my first year of undergrad. I had three exams in three days, which is challenging for anyone, but I felt like my body just shut down. When I'd go to the library to study, I would start crying uncontrollably. I was so incredibly nervous and worried about failing these exams that I wasn't able to retain any information that I was studying. I'd keep reading the same sentence, but I wasn't processing anything. It's like I was preventing myself from studying because I was so nervous.

I ended up doing fine on the exams, but the experience was so awful, I thought, “This can't go on.”

I talked to one of my good friends who’s a year older than me. I really look up to her. She told me she started taking an SSRI — Cipralex — for her anxiety, and it was life-changing for her. She was able to do things without the debilitating symptoms that she was experiencing, and the panic attacks were going away. When I heard that she had tried SSRIs and they worked so well for her, that changed my perspective on it. I had been kind of skeptical about medication up to that point. I didn't believe it was going to help me that much.

But I felt desperate to find some kind of relief, so when I talked to my doctor about what I was experiencing, I actually suggested it. He had me do some questionnaires, and then he started me on the medication.

When it started to work, I at first didn't notice because my life was coming together. I wasn't having such anxious, ruminating thoughts anymore. I wasn't catastrophizing all the time. Something would happen that normally might ruin my entire day or week, but instead, I was able to write it off. I’d tell myself, “this is one instance,” and wouldn’t get pulled into that cyclical path of destructive thoughts.

I was just more able to cope with my life — and not just cope with it but also thrive. I felt like I was able to be myself.

Once I got my anxiety figured out, my studying was better, but I still had a hard time focusing for long periods of time. When I started my master's program, it became really apparent. A lot of my classes were three hours, and I could not focus for the whole class. I'd always end up having five different tabs open on my laptop and be doing three different things. I'd still be listening, kind of, but I'd zone out so easily. And I'd see people beside me who were sitting there completely still, not moving, just one document open on their computer, attentively listening. I thought, “I don't belong here. Something's wrong with me.”

I was also losing things a lot. I mean, everyone loses things, but it was getting really bad. I locked my keys in my car six times one winter, and twice I did it while my car was on. I never knew where anything was. I would try really hard to stay organized, and I still would end up losing things and forgetting my wallet on the bus. It just started to take over my life.

The success I had previously talking to someone about my anxiety made me think maybe there's something else going on.

I started off on one medication called Concerta, but I didn't really like it. I felt like it made me really irritable and angry. I take Vyvanse now, and when I started taking it, I decreased my Cipralex dose. I guess some of my symptoms that I thought were anxiety were also ADHD symptoms. Or I was experiencing anxiety about my unmanaged ADHD symptoms, like not being able to focus for long periods of time, or feeling like my life was unmanageable. So when I had my ADHD more regulated, that actually decreased some of those other symptoms that I was feeling.

After my undergrad, I started to tell people about my anxiety medication because I felt like it was something that people don't really talk about and it was something that I wish I had known earlier. I'm more nervous telling people about the Vyvanse. With ADHD medications, especially in college, people use them a lot to cram for tests. There's a market of people selling them, and they're kind of seen as a performance-enhancing drug. There's this perception that you have an advantage over everyone else because you have them. I told one of the students in my master's program that I was taking Vyvanse, and she was like, “Oh, wow, you're so lucky. I wish I had a prescription for those. No wonder you did so well on the midterm.”

For the Cipralex, I feel like it's changed my life in such a positive way that I don't see myself ever going off it. For the Vyvanse, ultimately, I want what's best for me and my functioning, but some of the side effects, like not getting hunger cues or not being able to sleep if I don’t take it early in the morning, really bother me. At the same time, in this place in my life right now, I find that it is essential, so I don't see many other options. I'm open to the fact that I could have to be on it for the rest of my life, but I would like to taper off it at some point or find something else.

More like this
I Was All For Medicating Mental Health Issues – Just Not For Me
By Anonymous, as told to Dana Smith
How to Help Your Parents Talk About Mental Health
By Gina Tomaine
When Your Partner Has ADHD (And You Don’t)
By Camille Beredjick
How to Understand Out-of-Network Benefits for Therapy
By Anna Davies
Get Even More From Bustle — Sign Up For The Newsletter