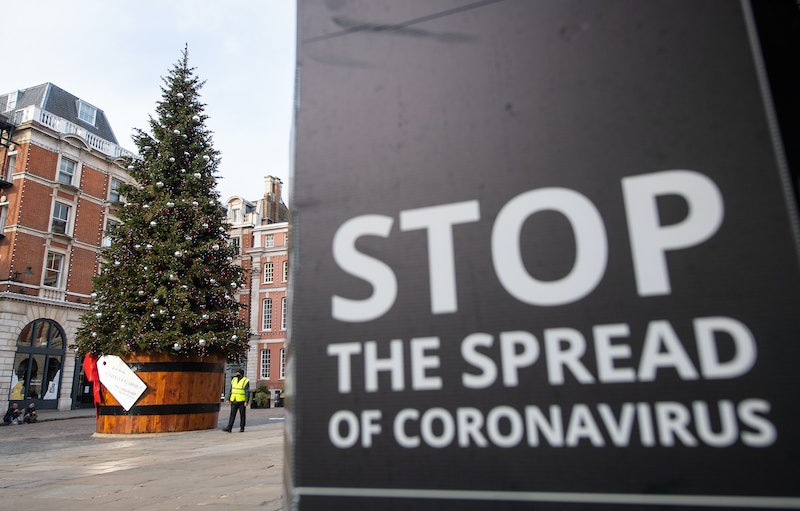 When England came out of its four-week “circuit-breaker” lockdown on Dec. 2, it joined Scotland in a tiered system of coronavirus restrictions for local councils. At the end of November, Prime Minister Boris Johnson announced that England would return to a strengthened version of the three-tier system of restrictions that were in place prior to the second lockdown, with the current tier allocations to be reviewed every 14 days. Then on Dec. 19, he announced the addition of an extra tier, Tier 4, to cover London and the South East from Dec. 20 in response to accelerating case rates in those areas and fears over a new strain of coronavirus.

Meanwhile, Scotland remains in a five-tier system which ranges from levels 0-4, which are being “reviewed on a regular basis” But with recent changes to certain areas across both England and Scotland, it can be hard to keep up with which restrictions you must adhere to. So here's how to keep track, and find out which tier your area is in.

The four tiers for local coronavirus restrictions in England are Tier 1: medium alert, Tier 2: high alert, Tier 3: very high alert, and Tier 4: stay at home. To find out which tier your area is in, you can visit the official UK Government website and enter the postcode of your current address or that of the place where you intend to spend most of your time. You'll then be redirected to a page outlining the rules of your area, which will differ depending on the tier your area is currently in.

The main factors the Government consider when deciding on which tier an area is placed under include prevalence of the new strain, case detection rates in all age groups, case detection rates in the over-60s, the rate at which cases are rising or falling, positivity rate (the number of positive cases detected as a percentage of tests taken), and pressure on the NHS — including current and projected occupancy.

The most recent changes (to be put in place from midnight Sunday, Dec. 20) saw London and the South East move from Tier 2 to Tier 4, along with some areas in the East moving into Tier 3. However, Bristol and North Somerset in the South West will go down from Tier 3 to Tier 2, and Herefordshire in the West Midlands will be downgraded to Tier 1.

You can find the full list of local restriction tiers by area below, as of Saturday, Dec. 20:

Yorkshire and The Humber

In Scotland, each region has been given one of the country’s five COVID protection levels, which include Level 0, Level 1, Level 2, Level 3, and Level 4 — the latter of which is Scotland’s highest level of restrictions. On December 19, Nicola Sturgeon announced that from Boxing Day (Dec. 26) Scotland will go into a third lockdown with all areas under Tier 4 restrictions. This will mean no mixing in other people's homes, with exemptions for carers, support bubbles, and co-parents. People will also be able to meet outside in groups of up to six. Restaurants, pubs, and bars will be closed, as will non-essential shops, indoor sports and leisure facilities, barbers, and salons. Places of worship will be open for up to 20 people at a time, with social distancing measures in place.

To find out which level your area currently falls under you can visit the official Scottish Government website and enter the postcode of your current address. To be sure of which region you currently reside in, you can also check the available maps of local authority area boundaries.

The full list of Scotland’s local COVID protection levels by council area can be found below, as of 6pm on Friday, Dec. 18:

This article was originally published on November 26, 2020