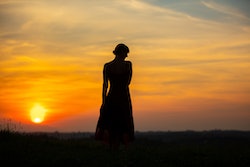 You probably hear the word “trauma” thrown around a lot more than you used to — people on TikTok claiming they’re traumatized by a celebrity’s new haircut, for example, or joking that they have post-traumatic stress disorder from watching the Presidential debates. The concept isn’t really anything to joke about, though, and people also use it in contexts that aren’t exactly appropriate. While all ranges of human experience are valid, knowing the definition of trauma, and what it is and isn’t, can help people who’ve gone through it get the support they need.

According to the Penn Center for Youth And Family Trauma Responses at the Penn University School of Medicine, psychological trauma is caused by an adverse experience, or series of experiences, that injures the way the brain works, impairing psychological, cognitive, and neurophysiological functions. That experience can be anything that causes deep distress or disturbance, like grief, a natural disaster, surviving an accident, a break-up, or abuse.

“Defining trauma is difficult, because there are so many types of trauma and it’s a very individualized experience,” Kira Vredenburg LMSW, a therapist at addiction treatment center Sierra Tucson, tells Bustle. It’s a word that can encompass a lot of different histories and feelings. But it has its limits, and experts tell Bustle that there are some things that may not require a trauma label.

According to the fifth edition of the Diagnostic & Statistical Manual for Mental Disorders (DSM-V), produced by the American Psychiatric Association, defining somebody as a trauma survivor has multiple parts. They have to have been exposed to a traumatic event, whether by direct exposure (being threatened themselves), vicarious exposure (being a bystander), or environmental exposure (people who work in SVU units, or whose close friends or family members went through a scary experience). Earlier editions of the DSM said that people had to react in a certain kind of way to traumatic events to be defined as traumatized, but that was revised in 2013.

The DSM-V’s current definition of traumatic events only includes “actual or threatened death, serious injury, or sexual violence”; they don’t stressful events like divorce, job loss, or a cancer diagnosis, which psychologists say can indeed induce a trauma response. “I prefer to define trauma as any situation or event that a person is unable to cope with emotionally and that leads to feelings of helplessness,” Vredenburg tells Bustle. Many of the patients she works with don’t initially believe themselves to be traumatized because they haven’t experienced war, a near-death experience, or sexual assault. But she says, they definitely feel the effects of trauma.

Experts also disagree about the validity of the DSM’s decision not to include trauma that could be caused by observing things via media, like the 9/11 attacks on television. Some people argue that seeing violence or threats — whether it’s on Twitter or an unexpected news bulletin — really can be traumatizing, while others say it stretches the definition of trauma too far.

Life’s full of difficult experiences, but not all of them are traumatic. “Symptomatically, there are some things we consider to be strong indicators that a person has been traumatized,” Vredenburg says. Serious anxiety, depression, difficulty connecting with others, intrusive thoughts, fear or panic, memories, nightmares, or flashbacks of the event, and avoidance of triggering people, places and things are all potential signs you’ve undergone trauma.

If none of these symptoms are present, you’ve likely gone through something hard but it hasn’t traumatized you, and your therapy and support needs will be different from people with trauma. But post-traumatic stress can be present even if the person shows no symptoms at all, so these signals aren’t a hard and fast sign. Vredenburg says that if you’re wondering if you’ve gone through trauma, chances are that you probably have.

She stresses that not everybody reacts in the same way to a traumatic event— some people come through them without noticeable after-effects, while others will bear deep psychological scars and find recovery challenging. That doesn’t mean they’re “weak” or less resilient; it means that they’ve been affected in a different way. But, she notes, this makes defining trauma really hard, because it’s not just about the event itself: it’s the individuals who experience it.

Why The Definition Of Trauma Matters

Trauma can also cause wider upheavals. “Experiencing a traumatic event impacts our beliefs about ourselves, other people, and the world,” Liz Kelly LICSW, a therapist with mental health provider Talkspace specializing in grief and loss, tells Bustle. “Trauma changes us, even if we have done a lot of work to process and heal from the event.” This is why the anniversary of traumatic events can be so upsetting for people, she says, even if they don’t show overt signs of trauma or have gone to therapy.

Research has shown that trauma can physically change the brain and body, Vredenburg says. It impacts the hippocampus, which preserves memories, and the amygdala, which controls emotions like fear and anger; the hippocampus often stops functioning effectively, while the amygdala becomes over-active, sparking feelings of fear constantly even when there’s nothing to be afraid of.

People who’ve gone through trauma, Vredenburg says, are “just trying to survive from moment to moment with a nervous system that feels like it is constantly unsafe and under attack.” This is why the healing process is so important — and why it’s so useful to know what trauma really is.