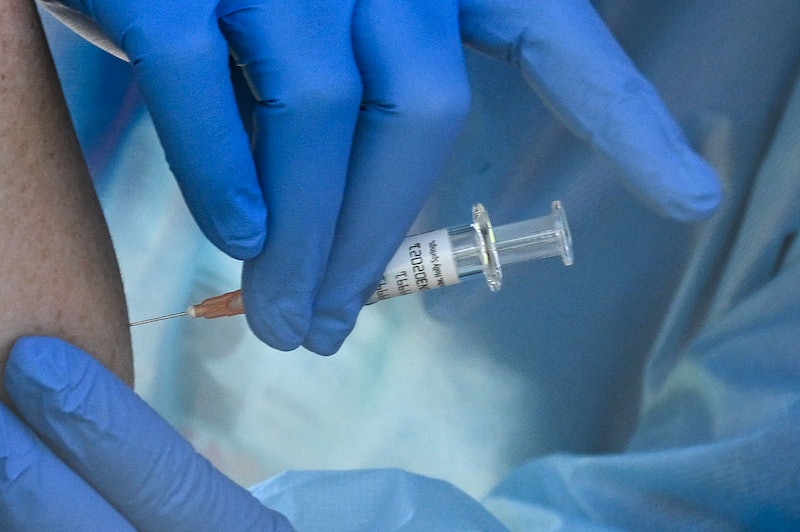 After an unprecedentedly terrible year, there's finally some light at the end of the tunnel: data has shown that multiple coronavirus vaccines are safe and effective. It may be feasible to start planning when you can get vaccinated. But unless you work in health care or an 'essential' part of the economy, your jab likely won't happen until 2021.

"Vaccine companies are ramping up quickly to produce enough vaccines for everyone as soon as possible," Dr. Teresa Bartlett, M.D., senior medical officer at claims management organization Sedgwick, tells Bustle. Science reports that the U.S. is on track to purchase around 40 million vaccine doses — enough for two doses for 20 million people — by the end of the year.

Right now, the earliest the Pfizer-BioNTech vaccine could be distributed is mid-December; the Food & Drug Administration (FDA) meets to discuss its trial data on Dec. 10., per CNN. It could take a few days for them to authorize emergency use, but once that approval arrives, people could start being vaccinated within 24 hours, according to the government's Health and Human Services Secretary Alex Azar. The New York Times reports that, pending the FDA's decision, 6.4 million doses of Pfizer and BioNTech's new COVID-19 vaccine will be shipped around the U.S. That's enough for around 3 million people to get vaccinated, since each jab requires two shots, given a few weeks apart. The government is planning to send them to every state and territory, as well as six major metropolitan areas, but it's up to state governors to decide where to allocate their share, the NYT says. General Gustave Perna, the logistics chief of Operation Warp Speed, told CNN that Warp Speed hopes to have close to 40 million COVID-19 doses distributed around the U.S. by the end of 2020.

Who Will Get The First COVID Vaccine Doses?

These first doses aren't going to be freely available to just anybody. The Centers for Disease Control and Prevention’s (CDC) Advisory Committee on Immunization Practices (ACIP) is responsible for figuring out who should get the vaccine first, and in what order. CNN reports that according to a Dec. 1 ACIP vote, America's 21 million health care workers and people in long-term care facilities will be part of phase 1a, the first roll-out of the vaccine. People in long-term care facilities — places like nursing homes — are especially vulnerable to severe COVID because of their age.

After that, it will then be distributed to essential workers as part of phase 1b, and then people with high-risk medical conditions, or who are over 65 will get it as part of phase 1c. The ACIP says you're an essential worker in line for the vaccine if you work in food and agriculture, food service, transportation, education, energy, police, firefighting, manufacturing, IT, communication, or water and wastewater. That's about 87 million Americans, according to Reuters. Per these guidelines, high-risk medical conditions include diabetes, heart conditions, and having had a solid organ transplant.

When Will The General Public Get COVID Vaccines?

After this first phase, coronavirus vaccines will become more widely available. "It is only an educated opinion, but by March some members of the general public should be able to receive their first dose of a vaccine," Dr. Bartlett says. The timing will depend on the number of people who need vaccines quickly: 3 million elderly people are in nursing homes in the U.S., for instance. The CDC said in December that it expects new deliveries of between 5 to 10 million vaccine doses from both Pfizer and Moderna per week, per Science. So it may take until spring to vaccinate those most at risk, and move on to everybody else. At the moment, Reuters reports, Operation Warp Speed plans to have vaccines available at pharmacies and clinics by April 2021, and accessible to all Americans by June.

Pharmaceutical company Moderna announced on Nov. 30 that it's applying for FDA emergency use authorization too. If it's approved, it will be added to Operation Warp Speed's distribution pipeline; the U.S. has placed an order for 100 million doses of its vaccine, according to CNBC, and Moderna is hopeful that they can produce 20 million doses before 2021. AstraZeneca's vaccine, meanwhile, hasn't yet completed its U.S. trial, but once it does, it will likely apply for FDA approval too.

If you were in the Moderna or Pfizer vaccine trials in the U.S., and were given a placebo, you'll likely be offered the vaccine once it's been given emergency authorization, and should be told your options by the drug company in charge of the trial.