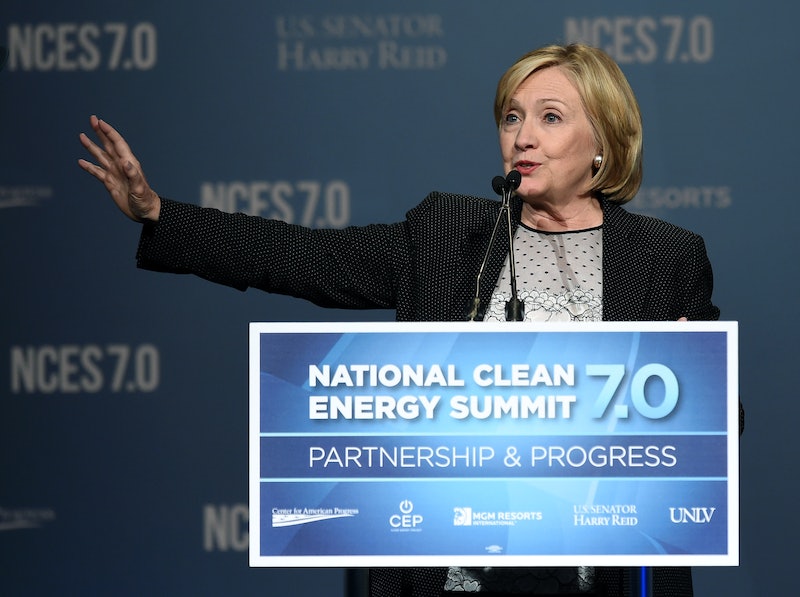 It's still 2015, but candidates in the 2016 presidential race have already begun to claim the most important issues for their platforms, and are hashing out large-scale plans for dealing with them. Environmentalism is a huge cause for the major candidates on the left, and two of them have come forward to share their environmental protection agendas. On Sunday evening, Hillary Clinton joined Martin O'Malley in providing climate change plans.

O'Malley shared his ideas for a green presidency back in June, winning Democratic praise for being the first major candidate to do so. The proposal is aggressive, and came right after Pope Francis' encyclical that expressed the need to protect the Earth from climate change. Although Clinton and O'Malley have the same goal in mind, their plans to accomplish it have some notable differences.

One of Clinton's largest goals centers around solar energy. She says she will expand America's solar capacity by 700 percent by 2020. According to her website, she wants more than half a billion panels installed by the end of her first term.

O'Malley also wants clean energy to be a part of his presidency. He advocates for the extension of tax credits that fuel the wind and solar power industries. He would launch an organization that centers around financing community wind and solar programs. He supports loans and grants for farmers and small business owners that encourage them to adopt clean energy.

Unlike Clinton, O'Malley mentioned the use of biofuels. As president, he would use tax credits and EPA volume targets to build a thriving biofuel industry. Although Clinton has not yet said whether biofuels would be a part of her plan, she supported their use during her 2008 campaign.

O'Malley believes that the way to make his plan sustainable is through training workers to embrace environmentally friendly practices. He wants to create an organization that focuses on clean energy jobs. This organization would theoretically partner with communities, build clean energy infrastructures, make buildings more energy efficient, and expand fields and forests. Clinton mentioned a "Clean Energy Challenge" that would partner with states, cities, and rural communities, but it's unclear now what exactly such a challenge would do for those communities.

Whereas Clinton keeps her agenda related to clean energy, O'Malley addresses job creation and economic issues with his ideas. He has also expressed his disapproval of offshore drilling and tar sand oil, while Clinton has been less clear on such controversial issues.

At this point, O'Malley's plan is a lot more specific than Clinton's when it comes to implementation and funding. However, Clinton says she will give more details in the coming months. Though she's given more concrete ideas than most other Democratic candidates, she might face pressure to add more specifics if she wants to compare favorably to O'Malley.