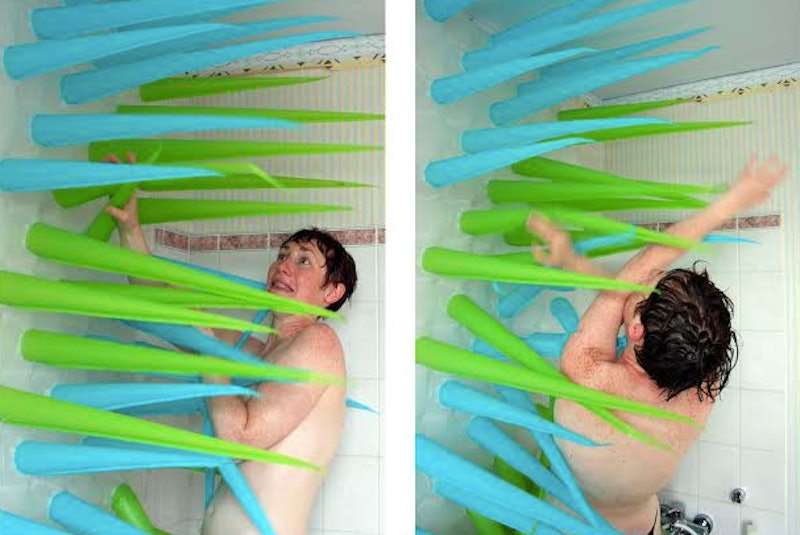 I'm a ~writer~, so I get it. You have all your deep and meaningful shower thoughts in those ridiculous half hour long steam sessions every morning. Well, here's another not-so-shower thought for you: you're wasting a ton of water, and it's terrible for the environment. Like, if you're in California, you know the drought struggle all too well. That's where designer Elisabeth Buecher comes in — the London-based installation artist created an inflatable shower curtain that spikes after four minutes of running water, so people will be encouraged to shut the water off.

"At the moment it is not a commercial product but an educational art installation," Buecher said to Bustle. "The tap has a sensor and after four minutes of running water, the sensor triggers the inflation of the spikes via an air inflator."

After that the spikes get up in your business just enough to disrupt whatever existential thoughts you're having about grilled cheese and remind you that there are baby penguins somewhere that will be sad when you waste all the water on the planet. And don't get all self-righteous and say that you're not going to be done with your shampoo/conditioner/body wash routine by then. Maybe it's just because I am as unsentimental and efficient about showers as they come, but trust me, if you can't get your squeaky clean on in four minutes, you're doing something wrong. (Side eyes everyone who ever let a murderer kill them dead in a horror movie.)

So why these adorably nefarious spikes, anyway? "The spikes idea comes from a movie by Tim Burton where he was featuring a torture instrument using metal spikes (Sleepy Hollow)," said Buechon to Bustle, "and also the inflatable idea comes from fetishist people who enjoy to use inflated rubber devices."

So there you have it — there's a little bit of fun in this shower project for everyone. (Insert winky emoji here, y'all.)

"I wanted to create this project because I do believe that it is very hard to do things that feel uncomfortable even if it is for our own good (saving water) and we need a little help to force us to do it," said Buecher. "I see my curtains like alarm clocks: you don't want to get up in the morning but you have to, the alarm clock helps you to do it."

Although Buecher's shower curtains aren't actually on the market, here's hoping that its mere existence is a reminder of the very real problem we face with preserving the environment. And here's also hoping that when this gets mass produced for the rest of us (fingers crossed), I can get mine in an aggressively bright GOOD MORNING SUNSHINE pink.

Here is a video showing the curtain in action, along with some other projects raising awareness about the environment:

More like this
34 Quotes That'll Inspire You On Juneteenth & Beyond
By Syeda Khaula Saad and Siena Gagliano
How To Fight For Reproductive Rights, Based On How Much Time You Have
By Courtney Young
Plan C Vs. Plan B: What's The Difference?
By Lexi Inks
Jujubee’s Humble Reminder
By Sam Ramsden
Get Even More From Bustle — Sign Up For The Newsletter