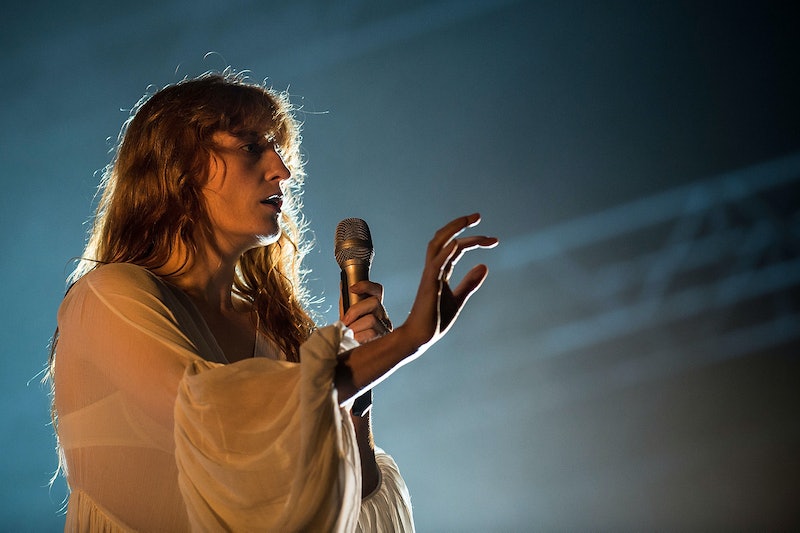 Florence Welch, who truly embodies the word "fierce," just dropped a new video that takes her persona to the next level. Florence and the Machine's "Queen Of Peace/Long And Lost" is a nine-minute work of art that portrays her oft-used theme of love in a healing manner. Welch is as captivating as ever as she uses her power to help a violent community. The first part of the video, "Queen of Peace," shows Welch wandering through a feuding group of people. (The backdrop is the stunning coast of Scotland.) The second half, "Long and Lost," has a more mournful quality, as it finds Welch wandering along a dock at night in a single-take shot.

In a press release (via Consequence of Sound), director Vincent Haycock spoke about filming the cinematic video:

“We filmed ‘Queen of Peace’ and ‘Long & Lost’ in Scotland, one of my favorite places I’ve ever been to or filmed. The coast of Scotland is breathtaking, beautiful and harsh, an aesthetic mix that both Florence and I have been very interested in during the making of these videos... it was cold, brutal and endlessly inspiring, which I think really helped the story of Florence’s struggle with her family, the younger innocence vs. the feuding violence of the men around her, etc. The end of the video was done in a single take... Florence delivers one of my favorite moments to date and it’s one of my proudest technical and narrative accomplishments.”

Welch's music is always emotional and moving, but her new video shows that she's capable of healing, as well. It's totally fitting that the first part of the video be titled "Queen of Peace," since her magic touch brings resolve to the community featured in the film — not to mention the viewer. Watching the video, be prepared to feel like all your problems have been healed by Welch and her gorgeous music.

Unfortunately, it's not currently available to embed (you can watch it on NPR here). In its absence, here are seven of the most moving moments from "Queen of Peace/Long and Lost."

When Welch's Innocent Persona Is Shown

When She Hugs This Man Amidst A Brawl

Just one example of the juxtaposition between violence and peace she uses.

When She Touches Foreheads With This Man

Welch's videos are full of emotion, and this one is no exception.

When This Dramatic Shot Occurs

The Scottish coast is officially the most stunning backdrop ever.

When She Comforts This Woman

Again, Welch is all about bringing the emotion.

When She Overlooks The Coast

In a way, it's like she's looking out at all of us.

When She Walks Along The Sea At Night

The piece concludes with a mournful walk along the water after dark.

It's a stunning, magical video – would you expect anything less from Florence?