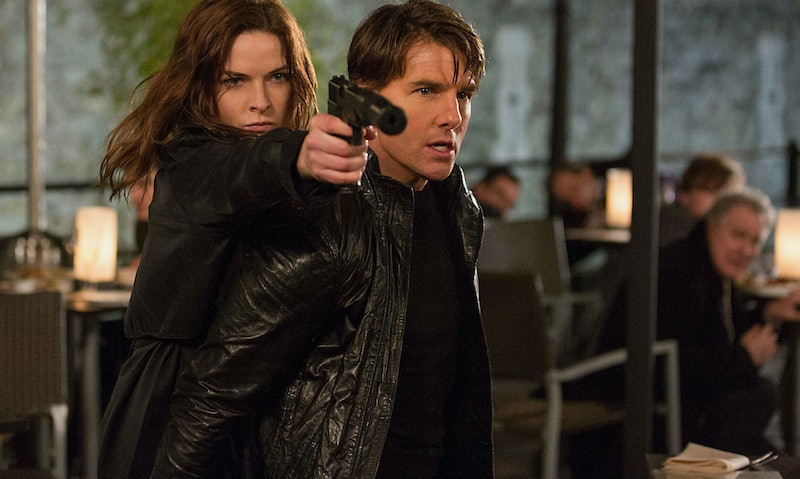 "I jumped off the Vienna rooftop," says Mission Impossible: Rogue Nation star Rebecca Ferguson. "And I have vertigo." But the impressive stunt is merely one of the dozens of jaw-dropping feats the cast of MI5 pulled off for the Tom Cruise film. "I did a drop that was 75 feet," the British beauty, who audiences will recognize from The White Queen and Hercules, says. "It was me jumping up, wrapping my legs around Tom [Cruise] with my back towards the jump. I remember holding onto him and just swearing, using these words I'm not allowed to use. I was holding on going, 'I can't believe we're doing this!' And he's just like, 'Yep! One, Two, Three... Go!' He was excited. I was terrified. Later on in the film there's a jump I do by myself, it's 120 feet."

The actress has been a fan of the franchise for as long as she can remember, and the insane stunts are part of the appeal as an audience member. "They are timeless. There are extreme stunts that are out of this world. They're intoxicating. My heart rate goes so fast. It takes me out of my own environment and world," she says.

The fifth installment in the beloved action franchise picks up where we left off. But this time, Ethan Hunt and his team (Simon Pegg, Jeremy Renner, and more) take on a highly — dare I say it, impossible — mission, eradicating the Syndicate. The fabled Syndicate is an International rogue organization that is hell bent on destroying the IMF, and most importantly, Ethan Hunt.

"We did everything in this film. There's so much action. I wasn't hanging off the plane. I couldn't ever do it. That was incredible," Ferguson says of Cruise's epic plane stunt that's gone viral. "But if Tom does his own stunts, I'm gonna do my stunts. There's this collaborative energy on set which is wonderful. For me, it was breaking through that fear. We're capable of so much more than we think if we get the support to try something out. Together we got get through it."

Though Ferguson is a novice action star, her famous co-star is a known adrenaline-seeker. "He's a guy who has found a niche. He loves doing action movies and he's phenomenal at it," she says. "The pace that we work at, and the actual amount of time we're filming... he has it in his spine to be able to work in this way. He's a producer, he helps out in the editing room, he's on set even when he's not in the scene just supporting and being there."

But it wasn't just jumping off of rooftops and delivering deadly high-kicks in heels. "Tom is hilariously funny," she reveals. "There were pranks being pulled, and Simon [Pegg] and Tom have a way on set because they've worked together before."

The 31-year-old actress plays a British undercover agent who is constantly at odds with Hunt in the film. "She's an equal to [Hunt], which I loved, and was such a challenge to pull off." In the male-dominated action genre, finding well-rounded and developed female characters can be challenging. While Ferguson's Ilsa is one of the only females in the film, with her high level of intelligence and physical abilities, she is a powerhouse of a woman.

"For me, it was never a question of being a woman. In this film, they're created a team, and they welcome me as part of it," she says. "My female roles have been very strong and powerful women. When I played the Queen of England, for example. I'm embracing these roles because we need them. But it's not necessarily just for women. Men need strong roles too. And children. And grannies."