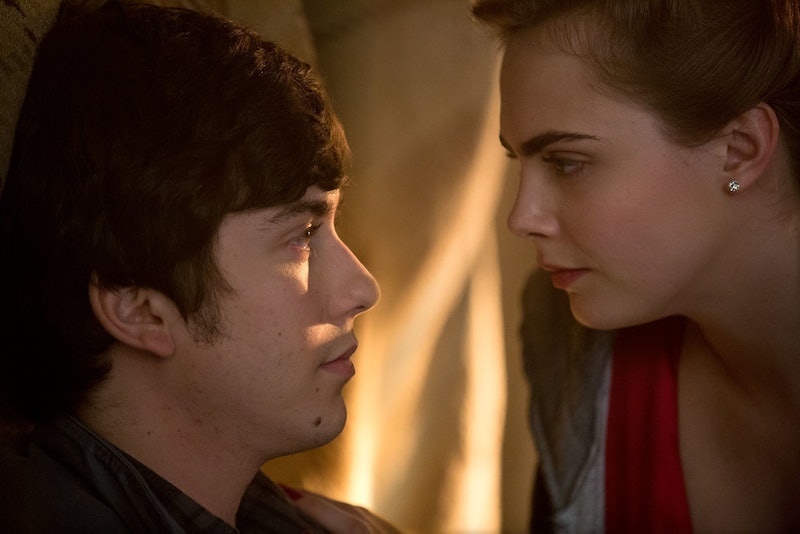 There is one moment at the very beginning of the film adaptation of John Green's Paper Towns that should stick out with audiences, if only for the fact that it is a far darker moment than anything else you will see on-screen over the next two hours. While riding bikes in their suburban Orlando neighborhood, a young Margo (Cara Delevingne) and Quentin (Nat Wolff) stumble upon the body of a man whom has committed suicide. Margo is morbidly fascinated with the discovery, while Quentin (or "Q" as he is called) would rather go home and tell someone immediately. This marks the only time in the Paper Towns film where suicide is ever discussed, and given the subsequent events of the film, it is odd that the filmmakers never chose to truly dive into the subject. Did they miss an opportunity to discuss an important issue?

In the film (as in Green's novel) Margo has grown from a curious little girl to a rebellious free spirit who will do anything and everything to squash boredom. Her world is large, full of wild adventures and heart-pounding moments. Q is envious of Margo's thirst for life, even if he prefers to stay safe within his inch-wide comfort zone. But Margo is more than just a wild child — there's also a sadness to her that perhaps only Q sees. When, early in the film, she runs away, everyone is sure that she will come back and assumes that she's off on one of her crazy trips, not putting herself in any actual danger.

But perhaps they shouldn't be so confident. In the novel, the characters — specifically Q — have reason to think that Margo might not actually be okay. They understand that her wild tendencies might be evidence of more serious issues, and when Q and his friends find clues to Margo's whereabouts, there's a significant discussion about just what Margo is leading them to. Is Margo calling out for Q to find her, or is she giving Q instructions on where to find her body? It's an important moment in the book, but one that the film doesn't touch upon at all.

Both book readers and viewers learn quickly that Margo is fine and living in a "paper town" in New York, but the truth is, her behavior gives plenty of reason to doubt that she's alright. Margo may be a legend in her town, but her behavior is also erratic — she runs away without telling a soul, and right before leaving, burns bridges with her best friends and apologizes to the neighbor she has barely spoken to in years. These signs could be indicative of a far scarier road Margo could have went down, one where she took her own life after neatly folding it up.

Watching the film, I can understand, to an extent, why Margo's potential suicide is written out: as Q himself states at the movie's conclusion, this isn't a story about Margo. As Paper Towns unfolds, Q begins to realize that while he was searching for Margo, the person he was really discovering was himself — his "miracle," as he puts it, is having wonderful friends and amazing adventures in his own life, not a mysterious human being living next door. Perhaps including the fear that Margo could have taken her own life would have clouded this; the story would instead have become a race against the clock to make sure that Margo really is okay, and that she hasn't hurt herself. It might not be the feel-good coming-of-age story that viewers were treated to onscreen, instead.

This might be the case, but it still feels false for the film not to even ask the question of whether Margo could have hurt herself. She is 18, unpredictable, and has just run away from home: there is a cause for concern here, and it's just not addressed whatsoever. The movie ignores her darker qualities and paints Margo as some free-spirited girl searching for the meaning of life. She is that person, but that doesn't mean she isn't also lost, confused and frightened about what's ahead. Margo may seem strong, but even the audience can see the cracks (or, as she states in the book, her "broken strings") — shouldn't the people in the story who know her also see them?

Only Green's novel allows this to happen, and as much as I enjoyed the movie adaptation, I wish that the film was able to weave in the concern for Margo along with the coming-of-age story the way the novel did. A major point in the novel and in the film is that all people are people — no matter how strong or "cool" someone may seem, no one is immune to the harsh realities of the human experience. Perhaps it just takes "movie Q" longer than his book counterpart to figure that out, but ignoring the fact that Margo could have committed suicide will always feel like a false note in the Paper Towns adaptation.

More like this
The 'Spiderhead' Movie Ending Is Nothing Like The Short Story It’s Based On
By Morgan Leigh Davies
What Song Does Eddie Play in 'Stranger Things'? Metallica’s “Master Of Puppets” Ignites The Season 4 Finale
By Alyssa Lapid
At 14, Jenny Han Wrote Rom-Coms About Her Friends & Fan Mail To Leo DiCaprio
By Alyssa Lapid
10 Must-Read New Books Out This Week
By K.W. Colyard
Get Even More From Bustle — Sign Up For The Newsletter