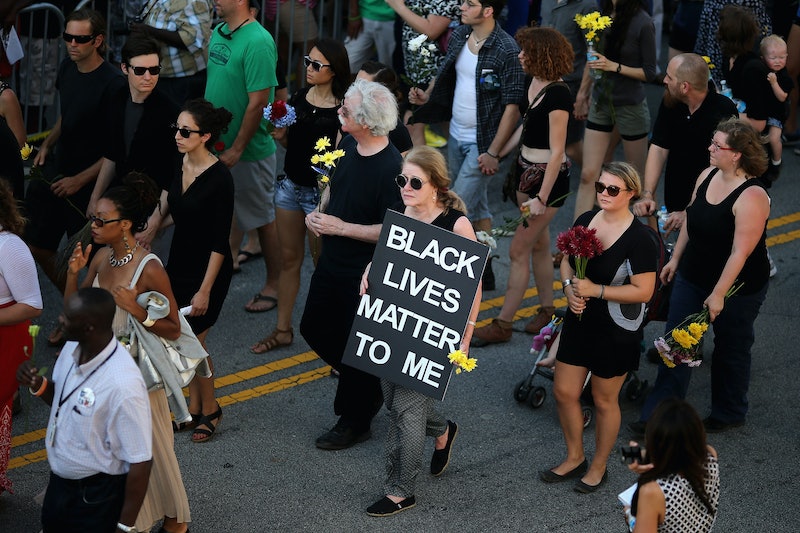 #BlackLivesMatter has always been more than a hashtag — it is a movement that is constantly working to end the oppression and murder of black bodies. And over the weekend, Black Lives Matter activists from all over the country came together for the first Movement for Black Lives Convening in Cleveland, Ohio, at which they prepared to discuss everything from racist police brutality to the black immigrant experience. The conference was designed to address a national state of emergency, in which black people are being killed on the streets, facing disproportionate incarceration rates, and dying in police custody.

But on Sunday, the conference had to deal with police violence, one of the many issues it aimed to address. According to ABC 5 in Cleveland, a local transit cop allegedly slammed a 14-year-old black teenager — who was thought to be intoxicated — into the ground after confronting him about an open container near a bus stop. The boy was then arrested, and when protesters demanded that his handcuffs be removed, they were pepper sprayed. In a statement issued Sunday evening, the Greater Cleveland Regional Transit Authority (RTA) reported that the teenager had been unable to take care of himself due to his level of intoxication, and that he was eventually released to his mother after being taken into an ambulance for treatment.

What Is The Movement For Black Lives Convening?

According to the movement's official website, the convening — which spanned from Friday, July 24 to Sunday, July 26 — was meant to be a space for hundreds of freedom fighters to come together and "reflect on our histories of struggle, build a sense of fellowship that transcends geographical boundaries, and begin to heal from the many traumas we face."

This historic event comes at a pivotal time for the growing movement for Black lives in the United States. Black people are facing unabated police violence, increasing criminalization, a failed economic system, a broken education system and the loss of our communities to gentrification and development. Our trans and queer communities face the increased risk of physical and economic violence. The list of indignities regularly faced by the Black community is long and untenable.

The convening came at an important moment: Black Lives Matter has accelerated into the national spotlight and drawn a great deal of attention to police brutality, mass incarceration, and the War on Drugs. It has also been an intersectional movement, highlighting the violence faced by black women as well as black queer and transgender people, and the convening created a space in which activists could come together and discuss their aims moving forward. The fact that the convening was in Cleveland was also significant; it served to honor Tamir Rice and Tanisha Anderson, both of whom were killed by police in Cleveland. The conference took place just after the recent deaths of Kindra Chapman and Sandra Bland — two black women who were found dead in police custody — as well as India Clarke, a black transgender woman who was beaten to death in Florida. Tamir Rice's mother, Eric Garner's mother, and Michael Brown's father — all parents of police brutality victims — were in attendance.

What Happened On Sunday?

The following series of videos illustrates what took place on Sunday, when a 14-year-old was reportedly arrested for suspected intoxication, and protesters — including a 12-year-old girl — were pepper sprayed when they tried to defend him. (Trigger warning for violence.)

In Sunday's statement, the RTA said that "a Transit Police officer used a general burst of pepper spray in an attempt to clear the way" because the crowd of protesters was preventing a police cruiser from leaving the scene.

Why Should You Care?

The fact that a conference using peaceful tactics to address the violence faced by black people had to face that same violence indicates that there is still a great deal of work left to be done. As the 2016 presidential election approaches, Black Lives Matter activists, through actions like the one at NetRoots and conferences like the Movement for Black Lives Convening, are organizing to demand political and social change. Because they're right — this is a state of emergency.

More like this
The Families Of Grenfell Tower Are Still Waiting For Justice, Five Years On
By Bustle UK
17 Powerful Photos From March For Our Lives Protests Across The U.S.
By Michelle Toglia
5 Concrete Ways To Take Action Against The Rwanda Deportation Plan
By Rachel Mantock
How To Fight For Reproductive Rights, Based On How Much Time You Have
By Courtney Young
Get Even More From Bustle — Sign Up For The Newsletter