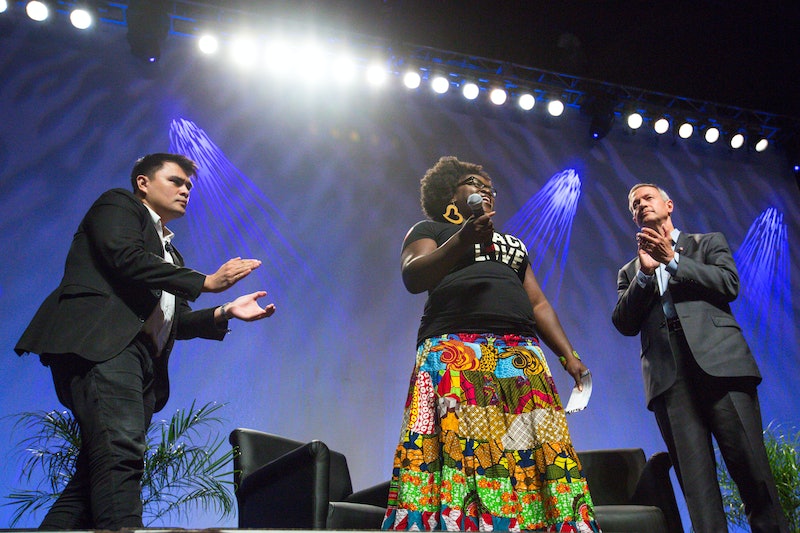 On Saturday in Phoenix, Arizona, Black Lives Matter activists took the stage at Netroots Nation to urge Democratic presidential candidates Bernie Sanders and Martin O'Malley to more explicitly challenge police brutality, mass incarceration, and structural racism while honoring black women like Sandra Bland who have recently died in police custody. Netroots Nation is an annual convention, initially organized by readers and writers of the liberal publication Daily Kos, for American progressive and political activists. With a keynote delivered by Massachusetts Sen. Elizabeth Warren and workshops and panels about the tech industry, media, economic justice, and more, the convention — which Democratic frontrunner Hillary Clinton did not attend — promised to be both pertinent and valuable.

Given the circumstances, the Black Lives Matter activists — who streamed into a presidential town hall event that featured Sanders and O'Malley and was hosted by journalist and immigration activist Jose Antonio Vargas — had chosen the perfect place. And yet, in a manner reminiscent of the treatment Jennicet Gutierrez received at the White House Pride reception, they were met with discomfort from the primarily white liberal audience. The candidates themselves also did not handle the situation well, and their responses to the action started a national conversation that resulted in both Sanders and O'Malley tweeting the #BlackLivesMatter hashtag.

So, What Happened With O'Malley?

Four dozen or so Black Lives Matter activists and protesters — including members of the Black Alliance for Just Immigration and GetEqual, as well as Patrisse Cullors, one of the founders of the Black Lives Matter movement — approached the front of the room as O'Malley talked about social security. Tia Oso, from the Black Alliance for Just Immigration, took the stage to acknowledge Phoenix as indigenous land, challenge white supremacy, address black immigration, and discuss the structural oppression that continues to be perpetrated in Arizona. Then, she proceeded to ask O'Malley an important question.

As the leader of this nation, will you advance a racial justice agenda that will dismantle — not reform, not make progress — but will begin to dismantle structural racism in the United States?

O'Malley quickly said "yes," but chants of "black lives matter" and "say her name" echoed through the room and drowned him out as he attempted to address criminal justice reform. The protesters went on to read out the names of black women who had died in police custody to honor them. Finally, Vargas asked everyone to take a breather while Cullors came on stage. She acknowledged O'Malley and Sanders and said that they would have a chance to speak, but that she needed to explain the action first.

It's not like we like shutting sh*t down, but we have to. We are tired of being interrupted... Let me be clear. Every single day, folks are dying. Not being able to take another breath. We are in a state of emergency, and if you don't feel that emergency, you are not human.

Cullors wrapped up her comments by urging candidates to think not about what they have already done but they will go on to do. It was clear O'Malley had been caught off guard by the action, because his subsequent statement that “Black lives matter. White lives matter. All lives matter" misunderstood the point of the protest, undermined the importance of #BlackLivesMatter, and was therefore met with jeers from the crowd prior to his exit.

What Happened With Sanders?

Sanders saw O'Malley's misstep, but after he took the stage to a standing ovation from the crowd, he still began his time with prepared remarks about media bias, economic inequality, and the need for a "political revolution." It was only halfway through his time on stage that Sanders finally answered the Black Lives Matter protesters.

Black people are dying in this country because we have a criminal justice system that is out of control ... Black lives, of course, matter. I spent 50 years of my life fighting for civil rights and dignity, but if you don't want me to be here, that’s O.K. I don’t want to out-scream people.

It was the second part of this statement, as well as Sanders' comments about the need for higher wages and increased employment opportunities for young people, that drew the ire of the activists, who had already criticized Netroots for prioritizing the discussion of economic inequality over discussions of racial injustice — something that Sanders himself is frequently criticized for. Sanders ended up exiting 15 minutes ahead of schedule, and then canceled meetings with activists.

Why Is This Important, & What Now?

Following the event, O'Malley and Sanders both finally tweeted their support for #BlackLivesMatter.

But tweets are not enough, and both candidates are going to have to step it up if they hope to win over black voters, who make up an important part of the Democratic constituency. The action at Netroots was a pivotal moment — O'Malley and Sanders clearly underestimated the reach and urgency of the Black Lives Matter movement, and when finally confronted with it were unable to respond adequately.

Vargas' Facebook post following the event revealed the critical nature of the intersections of the various movements represented at the action. While this may have been a crucial moment in both presidential campaigns, it was also an important moment for marginalized people who are fighting to make themselves heard and who are pushing for political action.

Clinton's absence from the event was significant, and Sanders and O'Malley have a lot of work ahead of them — at the very least, they will have to outline some solid policy plans around police violence and mass incarceration to back up their tweets and comments at the town hall.