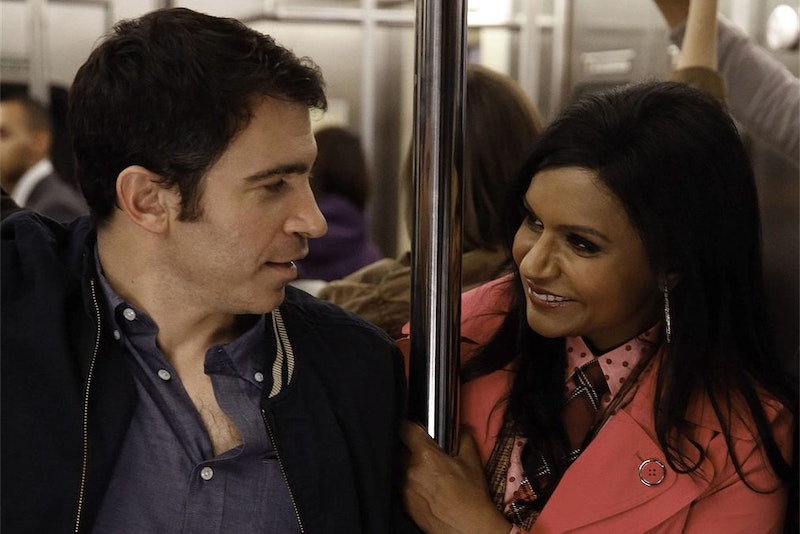 It has been quite the roller coaster of a year for fans of The Mindy Project. When speculations started circulating that the show was going to be canceled, fans rallied for #SaveMindy online. Then, when Fox actually did pull the plug, I was devastated. Thankfully, things quickly turned around when Hulu announced they were officially picking up the progressive comedy. It feels like it's been ages since we've heard from Kaling and her crew, but now we finally have a little bit of inside scoop on the return of Dr. Lahiri. In the Hulu premiere, Freida Pinto and Joseph Gordon-Levitt will guest star in a Sliding Doors-esque episode as the "What if?" futures of Danny and Mindy.

In this alternate universe, Mindy is married to JGL and Danny is dating Freida Pinto, who will be playing a version of herself. It will be both fascinating and heartbreaking to see what would happen if Mindy and Danny didn't end up together. Would they ultimately be happier? Would they have "easier" lives? Would Mindy have ever gone to San Fran? I have so many questions and I cannot wait to see what the final results will look like.

It's a bold move to premiere a re-launch on a new network with an episode that explores "what if" instead of picking right up where they left off. Then again, that's why fans love Mindy Kaling's work so much — it's always surprising and never boring.

Here are more shows I would love to see explore alternate realities:

What If Titus Andromedon Finally Got His Big Break?

Would he bring Kimmy along for the ride or would he become a total diva? Either way, I want to see what Titus on Broadway looks like.

Damn it, Deacon, let the woman be happy! Let her live the country mega star life she was always meant for! Let's take a look into the ridiculously glamorous and dramatic life of a super couple.

What if Hannah Actually Finished Her Grad Program?

Come on Hannah, see SOMETHING all the way through before quitting when it gets too hard. Would she have ever heard about Adam's love life? Would she have cared? We could get to know Hannah fully detached from New York and from Adam.

What if Ygritte Never Died?

Jon Snow could have abandoned the (literal) backstabbing Night's Watch, which would have been better for EVERYONE.

What if Pied Piper Sold Out to Hooli?

It would be fun for at least ONE episode to see the earnest, honest guys of Pied Piper live like kings... just to see what they would do.

What if Jess Married Ryan?

He was perfect on so many levels... except for that whole distance thing. But what if Jess was more than enough for him to stay? She could have moved out of the loft, moved away from Nick (living with an ex can't be healthy), and continued to kick ass as a VP. It would be even more fascinating to see her go to England and how the boys function without her.

What if Broad City Took on Los Angeles?

Something about Abbi and Ilana as native Los Angelinos just tickles me. Spinning classes are even more cult-like, weed is more plentiful, and it's a very different type of insanity in the Hollywood Hills. I can just imagine Ilana's celebrity dog massage business now. Take a hike for an episode, Brooklyn.