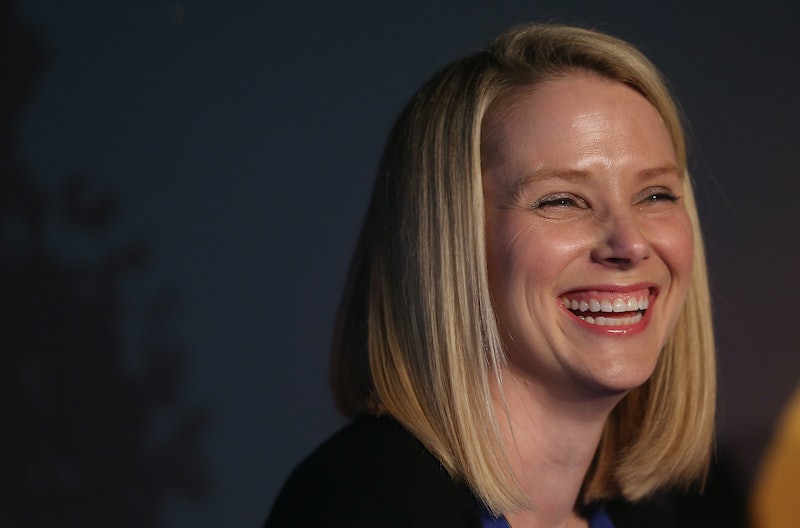 Yahoo CEO, ex-Google exec, and all-round trailblazer Marissa Mayer is a hell of a force to be reckoned with. She was Google's first female engineer, has revolutionized Yahoo (and its maternity-leave policy to boot), and is routinely named one of the world's most powerful women. She's also a wife and mother, and happens to be gorgeous. During Yahoo's first shareholder meeting on Tuesday, a company investor decided only one of these things was worth mentioning. Guess which one!

"I'm George Polis," the investor announced during the Q&A session, presumably hoping that Mayer would look him up on Facebook later. "I have 2,000 shares of Yahoo." Because Mayer is quite clearly the kind of women who would be into that, right, George?

Cue obnoxious laughter from everyone except Mayer.

The man went on to enquire about dividends, which one of Mayer's colleagues stepped in to answer. Mayer herself completely ignored our friend George—which, of course, she's been handsomely criticized for. The audience (in which we can't find a single other woman; it's like Where's Waldo for females) didn't stop there: another investor asked her which soccer team she roots for.

We bet Mark Zuckerberg doesn't have to deal with this shit. Speaking of Zuckerberg, guess how he introduced his brand-new COO, Sheryl Sandberg, to a bunch of executives on her first day? "Everyone should have a crush on Sheryl!"