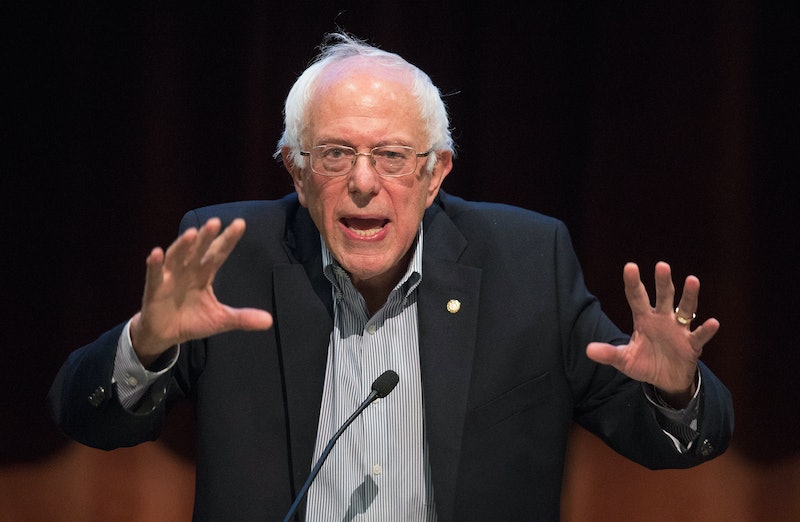 Can you "feel the Bern" yet? Vermont Senator Bernie Sanders is at this point the undisputed main challenger to Democratic frontrunner Hillary Clinton. You can understand why — his straight-talking form of economic populism has obvious appeal. At a campaign rally in Louisiana on Sunday, however, he tackled an issue he's been giving more time to lately, and it shows the value of pushing your candidates to be better. Bernie Sanders talked about Black Lives Matter, calling out the injustice of Sandra Bland's violent arrest earlier this month. Here's what he said:

When an African-American woman gets yanked out of her car, when we all know that would not have happened to a middle-class white woman, we know we need some serious change in criminal justice in this country.

You may have already heard about Sanders' uncomfortable experience at Netroots Nation, a progressive conference. Sanders and former Maryland Gov. Martin O'Malley showed up and were met by a protest staged by Black Lives Matter activists and organizers (led by Tia Oso). The protesters challenged Sanders and O'Malley to name and state their specific policy solutions on police violence against people of color. The video below shows the full protest, with Sanders' portion beginning at 20 minutes in.

O'Malley let slip an "all lives matter," which earned him some jeers (he would later apologize for the turn of phrase). Sanders got visibly defensive, and reportedly canceled some meetings with black organizers and leaders after the event.

It generated a lot of conflict. Some attendees and Sanders supporters were rankled by what happened, while Black Lives Matter proponents felt it was a simple, powerful demand to be heard on an absolutely essential issue for people of color.

But one thing is transparently obvious, regardless of however many (predominantly white) liberals might have objected to the Netroots protests: They worked. O'Malley apologized for his "all lives matter" gaffe the very next day. And Sanders — the sole non-Clinton Democrat who really seems to be in this fight for the long haul — has made some adjustments since then in how he centers and discusses the issue.

Sanders followed up by making the same point about Bland in a meeting with black leaders at the Southern Christian Leadership Conference in Baton Rogue, according to MSNBC. Again he raised a compelling counterfactual: Would a white woman have been arrested the way Bland was?

Anybody who saw the recent Sandra Bland tape understands that tragically, racism is alive and well in America. I don’t think anybody believes that a middle-class white woman would have been yanked out of her car, thrown on the ground, assaulted and then ended up jail because she made a minor traffic violation.

This represents a crucial change in how Sanders has traditionally talked about race. As Vox's Dara Lind detailed after the Netroots dust-up, a huge source of the discord between Sanders and the protesters (besides his prickly attitude in response to them) is that Sanders tends to focus on economic injustice, the plight of the haves and have-nots, and speaks about racism as a function of those factors.

What the Black Lives Matter protest at Netroots Nation was trying to do was to force Sanders to confront racism and police violence as their own distinct issues, and it's clearly worked. It probably didn't hurt that Hillary Clinton, who didn't attend Netroots, took the opportunity in a Facebook Q&A to jump in and fill the void left by Sanders' bad showing. She wrote:

Black lives matter. Everyone in this country should stand firmly behind that. We need to acknowledge some hard truths about race and justice in this country, and one of those hard truths is that that racial inequality is not merely a symptom of economic inequality. Black people across America still experience racism every day.

In other words, she drew a glaring distinction between how she was willing to talk about race and how Sanders typically framed the issue. The result? Sanders clearly now sees that this is as vital an issue to his long-term political viability as any other, which was the entire goal of the protest against him in the first place. It's still too early to say whether Sanders' rhetorical pivot will help secure him more support from black voters. Still, Tia Oso and her Netroots protest successfully pushed the most progressive candidate in the race to put these issues front and center. And whether it realizes this or not, the progressive community is in her debt for that.