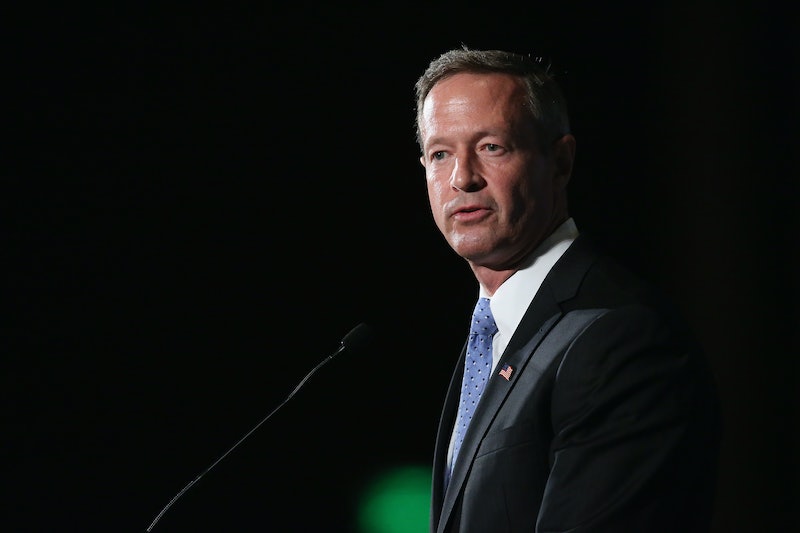 Saturday was a big day for Democratic presidential candidate Martin O'Malley. Despite serving two terms as the governor of Maryland and being one of just five Democrats in the 2016 field, he's getting pretty overlooked in the early going. So, like Vermont Sen. Bernie Sanders, he decided to speak at Netroots Nation, a good opportunity to draw some attention at a high-profile progressive event. And draw some attention he did, for all the wrong reasons: Martin O'Malley was booed for saying "all lives matter," and he really should have seen that one coming.

Look, there's no denying that O'Malley was probably a little thrown off his game. His appearance was interrupted by seemingly organized chants before the offending flap, an interruption that culminated in activists taking the stage and getting on the mic. That has to be a little disorienting, regardless of whether you're sympathetic to him or not.

But that kind of a moment can speak volumes, too — about how someone responds to a breakdown in the prearranged order of things, and how they choose to communicate about the most raw, serious issues for a given community. Here's are three reasons why Martin O'Malley got booed, and why "all lives matter" really needs to go away:

It's An Unneeded Statement

Think about the phrase "black lives matter," and all the events that culminated in the birth of the movement. Mainly, instances of black people being slain by police without any legal action afterward. Michael Brown in Ferguson, no indictment. Eric Garner in New York City and John Crawford in Ohio — both men's deaths captured on video — no indictments. It's true that all lives do and should matter, but the point is that when black lives are lost, society doesn't treat it as such. Institutionally and in the hearts and minds of countless racist trolls you can find in all corners of the Internet, black lives matter less. Which is why it's so important to specifically name that, and to be unapologetic about it.

Think of it like this: have you ever seen supporters of law enforcement tweet #BlueLivesMatter? It became a thing after the murder of NYPD officers Rafael Ramos and Wenjian Liu late last year, and you still see it from time to time. But beyond being intensely inflammatory — appropriating black activism against police brutality in service of law enforcement — it crucially misses the point.

After officers Liu and Ramos were killed, what happened? Their tragic deaths were national news, everybody knew their names, and there was a massive police and public response. The loss of life was treated as unacceptable and horrifying, and not just by police officers and their supporters, but by the public at large. And, had the perpetrator not killed himself shortly after the murders, he undoubtedly would have been hunted relentlessly and brought to justice. That's the difference.

Basically, if you're a white authority figure invoking the language of black activists, you should only do so address the issues, not dilute them.

In reality, O'Malley's remarks were even a little bit worse than a simple "all lives matter" would have been. In full, while discussing how Maryland halted the death penalty under his watch, O'Malley said the following (the relevant portion starts around 48 minutes in).

O'Malley must've felt some conviction about this, because he repeated it even with the boos and jeers still raining down from the first time. But, both in tone and in execution, it was an epic blunder. He came off, quite frankly, as though he were lecturing black people about their own movement. The argument of activists isn't that white lives don't matter, it's that black lives should matter every bit as much. In fact, over the din of the crowd, you can make out a man's voice yelling just that.

In short, it came across as incredibly condescending, and made it seem as though O'Malley hadn't put enough thought into such a loaded remark.