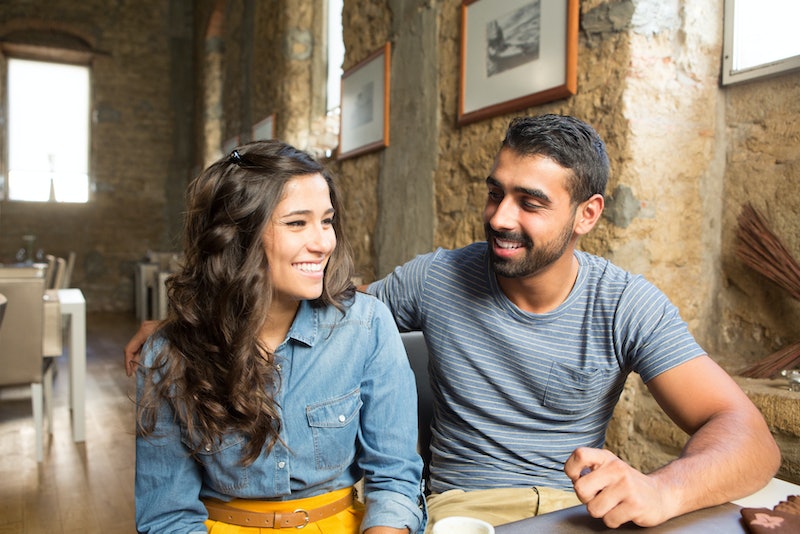 I love first dates. They're so full of possibility and, at the very least, are a great chance to get to know someone new over a delicious bowl of chips and guac. But knowing what to ask on a first date can be a little difficult. It can also be pretttyyyy awkward to have to sit across from a complete stranger for an hour trying to make small talk. There are the normal "getting to know you" questions (where are you from, what do you do, what's your family like) that yes, obviously you should ask. There are also the "stay away from these at all costs" topics (religion, politics, past relationships) that are definite no-nos.

I've learned the hard (and often awkward way) that to keep things interesting, and to avoid any of the brutal silences that are commonplace on first dates, to try asking about things you actually care about. Let's be honest: It's great that his sister went to college in California and that his mom likes dogs, but that tells you nothing about whether or not the two of you are compatible.

These 10 unexpected, albeit important, questions will help you get a sense of the person you've agreed to go out with instead of spending your Tuesday night watching Netflix alone. Hopefully, if your date answers the right way (especially #7), the night will actually end with someone to keep you company for your next House of Cards marathon.

1. What’s your favorite place you’ve ever visited? And where are you dying to go?

Finding out a guy I recently went on a first date with had hiked Machu Picchu told me that he was up for a challenge and a really cool adventure, which I found incredibly attractive. Talking about a dream vacation is a great way to bond, especially if travel is something that’s important to you.

2. When you were little, what did you want to be when you grew up?

Bonus points if they actually ended up going through with it. I once dated a guy who had once dreamed of being a pirate, and grew up to become an engineer on a boat. He was incredibly passionate about his work, and wanted me to be excited about it too, which turned out to be a real turn on. On a first date, use this as an opportunity to gauge if they love what they're currently doing with their lives, or if their job is just something that pays the bills.

3. What was your best-ever Halloween costume?

Even if the date’s a bust, at least you’ll walk away with an idea for next year’s costume. Finding out your date is creative is a huge plus, and finding out they have a horribly offensive sense of humor (as I did when a guy revealed to me that he once dressed up as a bloody tampon) is a quick way to figure out that it is not the person for you.

4. What was the absolute happiest moment of your life?

Personally, mine was the day my senior year of high school when I won a debate tournament and later found out I had gotten into college. Mentioning it on a first date informs whoever has agreed to go out with me that I’m a huge nerd, which is something they deserve to know from the beginning. Listening to your date talk about a time when they were extremely happy is a great way to bond and figure out what their passionate about, and it will also inevitably put you both in fantastic moods.

5. Are you afraid of spiders?

I suggest asking this question because I am afraid of spiders, and if things are going to get serious I need to know that you’re going to be OK with getting rid of them every time I find one. Two arachnophobes in one relationship is a recipe for disaster.

Finding someone whose fears contradict your own, though, can challenge you to try new things. I'm terribly afraid of heights, and an adrenaline-junkie former fling convinced me to join him to jump off the super, super high rocks at the beach. It was terrifying, and I wanted to kill him at the time, but it helped me face my fears and actually made the two of us closer.

In my opinion, Sundays are the best day of the week to be in a relationship, so compatibility in this realm is uber important. If you (like me) like a "sit on the couch and binge-watch Orange is the New Black for 10 hours" kind of Sunday, and they're more of a "go for a 20-mile bike ride around Manhattan," kind of person, chances are it isn't going to work out. When a guy recently tried to get me to do a 5 a.m. "fun run" with him on a Sunday morning, and was mad that I wanted to stay in and order brunch to my bed, it was time to cut it off.

7. If you were on death row, what would your last meal be?

This is a good way to steer the conversation in a way that will help you figure out whether the two of you will be compatible food sharers, which is arguably one of the most important qualities in someone you're dating. When I asked this on my first date with my most recent boyfriend, he revealed that he hates pickles — which are one of my favorite foods — and promised that any time we went out, I could eat his. I knew we were meant to be.

8. If you could live in one movie scene, what would it be?

Way more interesting than “what’s your favorite movie,” isn’t it? My favorite answer ever? The parade scene in Ferris Bueller’s Day Off. Any guy confident enough to want to sing Danke Schoen in front of thousands of screaming Chicagoans is a catch.

On a first date, you've gotta ask. At the very least, do the fake “fumbling in your purse” for your wallet, thing. There are certain rules for who should pay for what on a date, but generally if they invited you out (at least for the first time), they should pay — and vice versa. This is also a sneaky-helpful way to test how good their manners are.

10. Do you like to be big spoon or little spoon?

This is a nonnegotiable, and is very important to figuring out if you're compatible out before you go home together. If I had known my last first date was going to make me big-spoon his enormous, hairy back for nine hours while he snored on my numb arm, I never would have agreed to a sleepover.