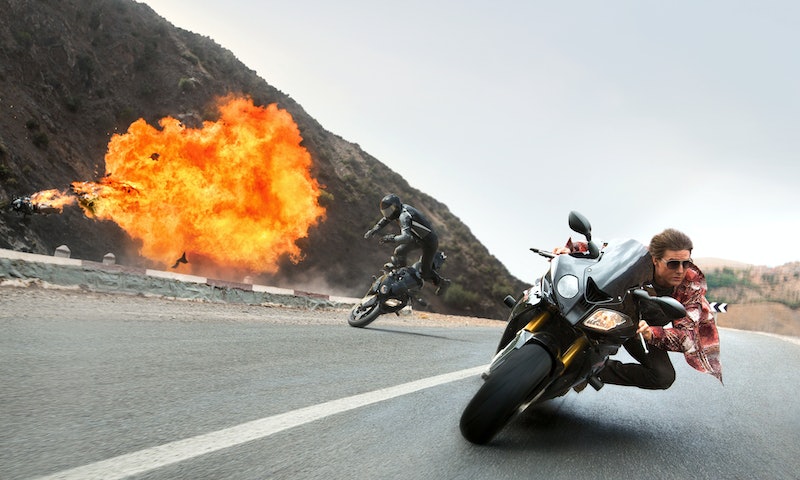 The Mission: Impossible franchise has grown enough to build its own world just like the Marvel Cinematic Universe and its endless catalog of source material. In fact, it's probably just as expansive, considering that its pedigree can be traced back to first episode of the Mission: Impossible television show which aired in 1966. From its recognizable theme song to the phrase "Your mission, if you choose to accept it..." everything about the series has become an integral part of pop culture. The franchise reached new audiences in 1996 with the first Mission: Impossible movie, and 19 years later it is still going strong. With so much to work from, it's no surprise that there are so many Mission: Impossible references in Mission: Impossible - Rogue Nation , the newest movie of them all.

There are many devices and elements of a Mission: Impossible movie that make it a Mission: Impossible movie, from fun gadgets to chase sequences to fight scenes. Sure, these will be familiar to anyone who's seen a movie starring James Bond or Jason Bourne, but with Ethan Hunt, they're a bit more ridiculous, in the most awesome way possible. The M:I franchise stands out because it's an amusement park ride, not just a series of movies; it has a sense of humor, and knows that explosions, punches and special effects make for spy movie perfection. Even better? Each installment is self-referencing and gives subtle, often funny nods to its predecessors. Here are some to look for in Mission: Impossible - Rogue Nation (Spoilers ahead).

1. Benji Finally Gets To Wear A Mask

Every single Mission: Impossible movie has a moment when a character wears a very realistic-looking mask as a disguise (the reveal is always a gasp-worthy moment!). It's become a staple in all the films. In Mission: Impossible - Ghost Protocol, Benji (Simon Pegg) talks about how he wants to wear one of these cool masks while doing some field work. In Rogue Nation, his wish is finally fulfilled (kind of) when they do one of the biggest jobs in the movie.

2. The Rabbit's Foot Makes A Cameo

During a scene in Rogue Nation, Ethan Hunt (Tom Cruise) is handcuffed to a pole and he sees the key and it's attached to a rabbit's foot keychain. Intentional or not, it's a quiet nod to the big MacGuffin in Mission: Impossible III, which was a weapon of mass destruction called "The Rabbit's Foot."

Rogue Nation travels to Morocco where there is a huge chase scene with tons of motorcycles. This may very well be a nod to Mission: Impossible II which had a climactic motorcycle chase between Cruise and the movie's main bad guy, played by Dougray Scott.

In Ghost Protocol, significant damage is done to the Kremlin in Russia and the Transamerica Pyramid in San Francisco during some awesome action scenes. Rogue Nation doesn't forget that all this happened (and to major world landmarks at that) as CIA head Hunley (Alec Baldwin) brings this up as reason for why the IMF should be dissolved during a hearing.

Rogue Nation isn't the first time M:I fans have heard of the anti-IMF known as the Syndicate. It was mentioned at the very end of Ghost Protocol, but it was also part of the original 1966 TV series as a crime empire that was IMF's number one enemy.

That's not to mention any references that are subtle nods to future M:I movies in the works — whenever M:I 6 arrives, be sure to play close attention to anything that's a shout-out to Rogue Nation.