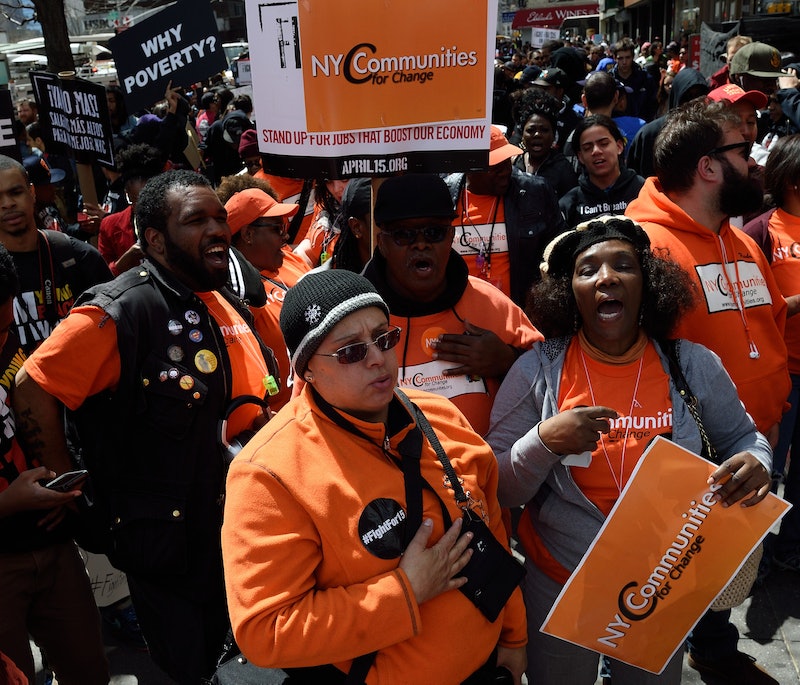 A nonprofit organization called Atlanta Women for Equality initiated a conversation about wage inequality by declaring that Tuesday would be #BlackWomenEqualPay Day. The hashtag, which trended on Twitter in the U.S. for several hours, is meant to draw awareness to the fact that black women only make 64 cents for every dollar made by white men, and that on average, a black woman would have to work through 2014 and an additional 208 days into 2015 to make what a white man earned in 2014 alone. As part of #BlackWomenEqualPay Day, AWE encouraged participants to metaphorically clock out at 2:07 p.m. (64 percent of the typical 9-5 workday) by tweeting pictures of time cards.

AWE's #BlackWomenEqualPay initiative pushes intersectionality to the forefront of discussions about wage inequality. As Yesha Callahan wrote for The Root, "most of the time people talk in general terms of women versus men." But the experiences of white women — who are most often discussed when these comparisons are made — are very different from those of women of color. White women are still at a disadvantage when compared to white men, but privilege operates in nuanced ways. That means that even though white women might be discriminated against on the basis of gender, they still have the privilege of being white, while women of color are marginalized on both fronts. The discussion spawned by #BlackWomenEqualPay is therefore critical to a nuanced understanding of how wage inequality operates on a systemic level.

In the fight for a $15 minimum wage, the lived experiences of different marginalized communities cannot be overlooked. Just as Fight for $15 is a feminist issue, equal pay is everyone's issue.

According to AWE, a black women would typically lose $775,000 to the wage gap over the course of a 40-year career.

These two tweets remind us just how important intersectionality is in this discussion. In the context of income inequality and unemployment, the experiences and voices of trans women of color — who often lay the foundation for social change — must be amplified and respected.

As Democratic presidential candidate Bernie Sanders attempts to find his footing in the Black Lives Matter movement, his knowledge of economics will prove useful in understanding the intersection of racial and economic justice.

The #BlackWomenEqualPay hashtag pushes back on the notion that a lack of education or experience is the reason for wage inequality. The pay gap is symptomatic of systemic inequality along various axes of identity, and it should be addressed as such.