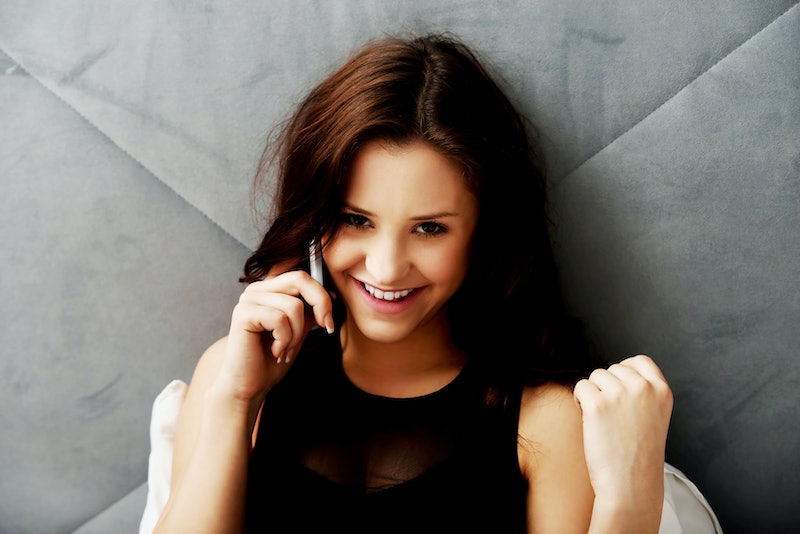 How addicted are you to your phone? I have to admit I can be pretty bad — if I'm reading a good book I won't think twice about it, but as soon as I see my battery go into the red I get really twitchy and start cursing myself for not bringing a spare charger. And occasionally digital detoxes don't seem to help. But even I was pretty horrified to read that 22 percent of people would rather give up sex for a weekend then get rid of their smartphone, according to a study of over 7,000 people in United States, Britain, Brazil, China, Spain, Mexico and India by KRC Research. Give up sex? I would light my phone on fire and sacrifice it to the gods of Verizon if it meant I could get sex for the weekend.

But some of the non-sex related stats were even more disturbing. 60 percent of people sleep holding their phones. Really? And one in six had used their phone in the shower — how?! Perhaps most disturbing was that "40 percent tell secrets to their phones they would not reveal even to their best friend"... which... what? I mean, how do you tell a smartphone anything? Stroke it and whisper to it while your girlfriend's asleep? I don't understand and I don't think I want to. Let's just keep phones out of bed, okay? Seriously, it's good for you — here are three other ways it's ruining your relationship:

1. It's Ruining Your Bed Time

Seventy-five percent of couples go to sleep at different times, and that's in large part down to phones. Firstly, it's distracting because keeps you glued to work email, which is obviously tremendously unsexy. And secondly, we all know that weird technology glow from our laptops and phones are turning us into sleepless zombies, which is also not very sexy. Unplug and use your bed for what it's made for — SEX! (Also: sleeping and Netflix.)

We're all really plugged into each other's lives, which I love as an American living abroad, but it's not great for your relationship. According to the U.K.'s The Mirror, "Facebook now crops up in a third of divorce cases over cheating and old flames." Yikes. But with constantly being up to date on every aspect of an ex, I guess it's natural that people are going to get curious. Is the little blue app worth it?

3. You're Being Third Wheeled

It may sound ridiculous, but a lot of people do find that their partner's smartphone is a third wheel in their relationship. One survey of 143 women looked at "technoference" and 75 percent of them thought smartphones were ruining their relationships, citing things like their partners looking at their smartphones while they were speaking. The study said that "allowing technology to interfere with or interrupt conversations, activities, and time with romantic partners - even when unintentional or for brief moments — individuals may be sending implicit messages about what they value most, leading to conflict and negative outcomes in personal life and relationships," according to the Daily Mail.

More like this
What Are Swingers? Everything You Need To Know
By Lexi Inks
GIRLI & Q Fell In Love At A Skatepark & Never Looked Back
By Jessica Morgan
13 Ideas To Add To Your Sex Bucket List
By Kristin Magaldi
TikTok’s Viral “Rating Game” Is Exposing Everyone’s Icks
By Courtney Young
Get Even More From Bustle — Sign Up For The Newsletter