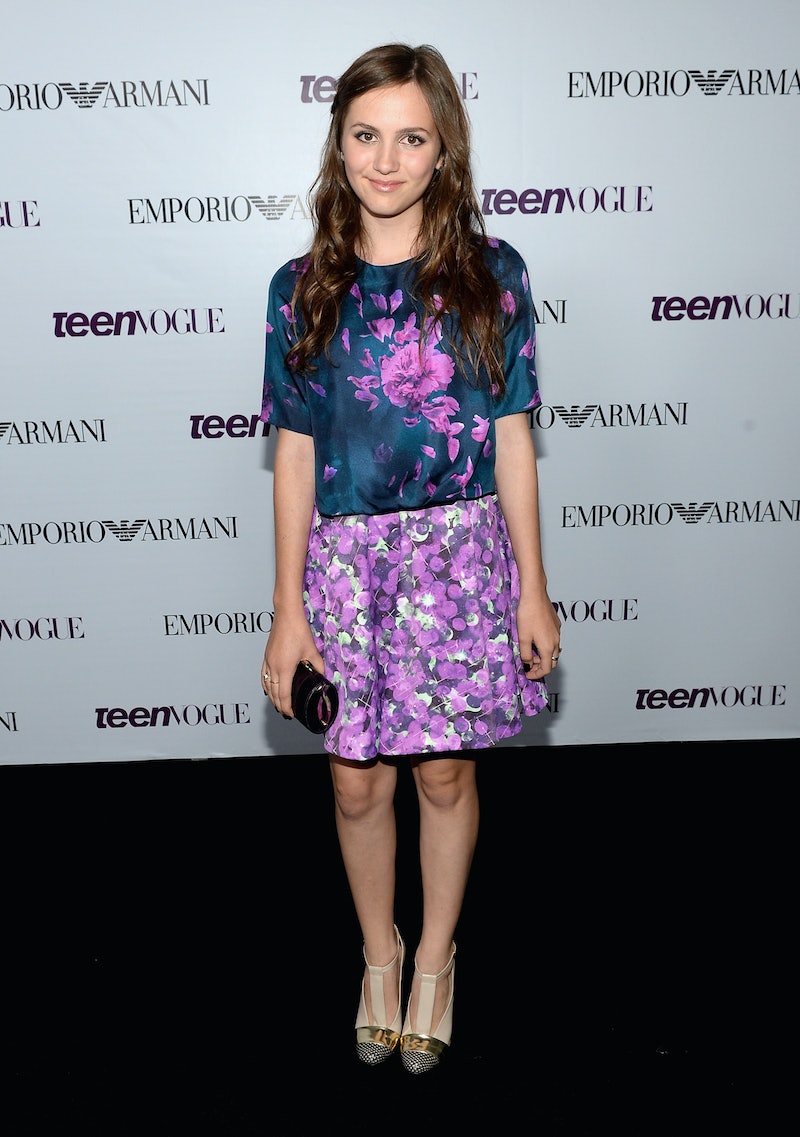 She wasn't just hanging around the Girls set last week to pal around with her friend Lena Dunham: she was there to work. According to TV Line, the 15-year-old Maude Apatow will guest star as Cleo in the upcoming fourth season of the HBO comedy, returning in 2015. There's no details yet about Apatow's Cleo, but the site does mention that she "could potentially appear in several episodes." (The young actress will join a Season 4 guest star roster that also includes Natasha Lyonne, Gillian Jacobs, Zachary Quinto, and Jason Ritter.)

Maude is the eldest daughter of powerhouse writer/director/producer Judd Apatow and she, along with her little sister Iris Apatow, has appeared in some of her dad's big screen hits including Knocked Up, This is 40, and Funny People. But, this will be Maude's first go on the small screen. Lest you forget, Papa Apatow is a writer and producer on Girls.

While we don't know much of anything about Maude's role on Girls, we do know that viewers will have opinions about her. Not only because Girls is one of the most dissected shows on television, but because when it comes to the world of Apatow, female characters are always put under the microscope. He's received criticism for his female characters in his films for being shrill or unlikable. Even Knocked Up's leading lady Katherine Heigl famously argued that the hit comedy was "a little sexist. It paints the women as shrews, as humorless and uptight, and it paints the men as lovable, goofy, fun-loving guys." She wasn't entirely wrong, even though she was the one that actually caught a world of hell for it.

I'd actually argue that Apatow's wife Leslie Mann had the worse female role in Knocked Up and This is 40, considering she's a gorgeous, mother of two who spends the majority of those movies wondering if she's still hot anymore, but I digress. Because as much as the Apatow world may be seen as a boy's club, he's had his hand in some of the most female-friendly entertainment out there, including Girls.

Lindsay Weir on Freaks and Geeks (Played by Linda Cardellini)

There wasn't one weakly written character on Apatow's tragically short-lived darling Freaks and Geeks, but there's something special about Lindsay Weir. A high schooler trying to figure out her identity (who isn't during that time?) while dealing with the pressures of family, school, and dating. She was smart, beautiful, insecure, and a little bit rebellious. She didn't let a pushy boyfriend define her existence and even when she hung out with the "cool kids" she still remembered where she came from. Lindsay totally ruled, even if she didn't know it.

Yes, Jules was technically the object of Jonah Hill's affections in the raunchy Apatow-produced comedy, but she was so much more than that. She was fun, quick-witted, smart, and didn't feel the need to succumb to high school peer pressure. She could throw a rager, but not feel the need to get fall-down drunk like everyone else. She was also very forgiving with Hill's character accidentally head-butted her.

Trish in The 40-Year-Old Virgin (Played by Catherine Keener)

In the wrong hands, Trish could have just been a piece of eye candy that acts as a vessel so the hero can finally have sex. Instead, Apatow co-wrote leading lady age-appropriate, smart, sexy, and sensitive. As a single mother (and grandmother), Trish was someone who wanted a sweet guy to have a healthy relationship with. That's not to much to ask...for any female characters for that matter.

Pretty much all of the talk surrounding this Apatow-produced comedy was about Aniston's nude scenes, which is too bad considering she played a female character allowed to explore her sexuality and dissect the boundaries of communication in marriage. How often do you see that in a mainstream comedy?

The Entire Cast of Characters in Bridesmaids

Apatow was a producer and collaborator on the smash hit that was penned by stars Kristen Wiig and Annie Mumolo. The comedy featured not one, but five unique female characters who beautiful, outrageous, fun, and most importantly — themselves. Yes, the movie is about a wedding, but the groom is hardly even a blip on its radar. Bridesmaids is a keen observation on female friendships and that ladies come in all shapes, sizes, and backgrounds and are hilarious and wonderful.