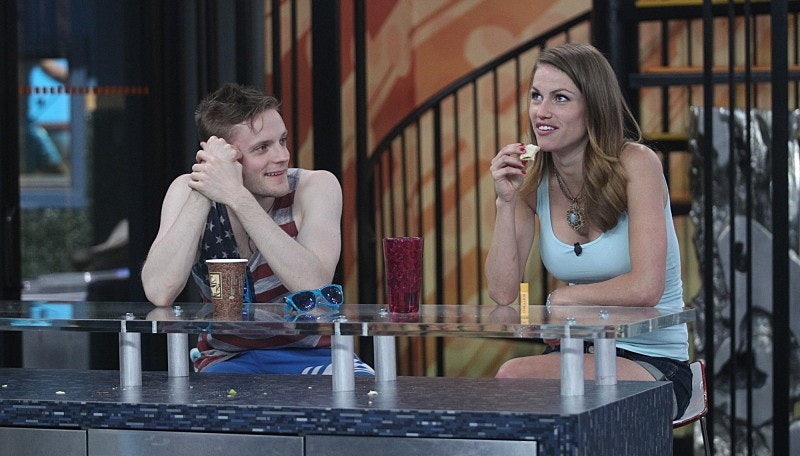 All of the Big Brother fans are pretty focused on the showmance between Shelli Poole and Clay Honeycutt or, as I would prefer to call them, "Slay." Those two have been getting an awful lot of attention on both television and social media. Then you have that one-sided love that Austin has for Liz. But, are those the only two relationships of the season, or is a secret romance brewing? Rumor has it that there's a third Big Brother showmance brewing between Johnny Mac and Becky.

Umm what? First off, we have barely seen Becky on screen at this point. And then, in contrast, the camera and fans love Johnny Mac. The fans also love Becky, even if the camera doesn't. Her #BeckyUpdates are faithfully recorded by her followers throughout her brief time on the feeds. So, considering all that. I just figured we would all notice if she was hanging around with him. But, I guess that's what's happening. Or is it? I'm so confused. CBS posted on its social media accounts to tease that this romance could be brewing. So, is there really something happening with Johnny Mac and Becky? Or is CBS just messing with us? It's time to get to the bottom of this supposed showmance.

Becky thinks Johnny is cool to hang out with, but is paranoid that people joking about them being a couple is going to put a target on their backs.

In this clip Becky says that she and Johnny are "extremely close" several times during this pretty emotional conversation in the pantry.

Johnny and Becky are so endearing playing pool. Even voices that are not pictured on camera are telling them that they are cute.

I'm not totally sure if they are playing checkers or just making a pretty pattern on the checkerboard, but I don't even care. I'm just enthralled by their undeniable chemistry here.

It doesn't seem like an actual romance has started, but I really hope it does. There's such a strong vibe between the two of them, and they can get away with a private romance since Clay and Shelli are taking up the spotlight. It's a little bit unclear what's going on, but it seems like there is definite potential for something to happen between them. Now we just have to find a good couple name for them...

For more on Johnny and Becky, and to keep track of everything going on in the Big Brother house, check out Bustle’s very own Big Brother podcast, The Diary Room. Listen to the latest episode below, and be sure to check out future episodes on Bustle’s SoundCloud page and iTunes.

More like this
The Love Island 2022 Reunion Drama, Explained
By Sophie McEvoy
This 'Big Brother' Legend Is Tipped To Host The ITV2 Reboot
By El Hunt, Maxine Harrison and Sam Ramsden
Twitter Is In Meltdown Over The Confirmed Return Of 'Big Brother'
By Sophie McEvoy
Indian Matchmaking’s Viral Revealed A Major Clue About Her Relationship With Aashay
By Radhika Menon
Get Even More From Bustle — Sign Up For The Newsletter