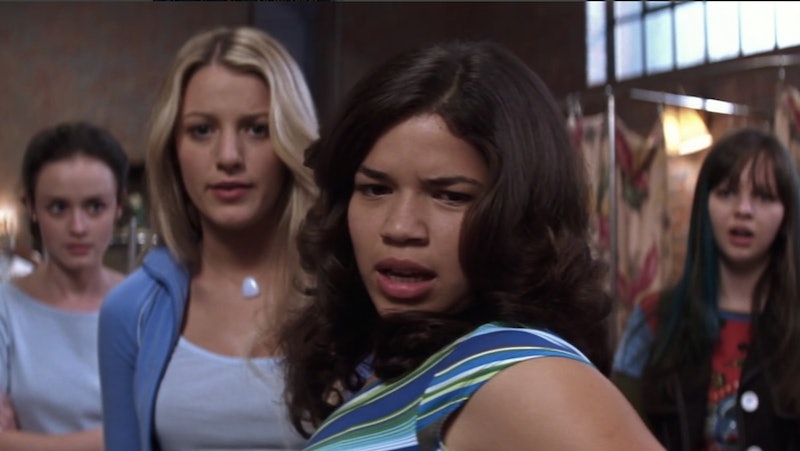 It's weird to think that The Sisterhood of the Traveling Pants is a decade old, but it's true. Your favorite summertime flick as an adolescent is growing up, and, turns out watching teenage drama as an adult makes you realize how silly it is. That's why it ends up this week's bad movie rewa...

Actually, no. The Sisterhood of the Traveling Pants is a phenomenal film, filled with heart, humor, and excellent thrift store finds. It very equally weaves four wonderful stories about love, loss, self-discovery and the eternal bonds of female friendship. It was a VERY important movie to me and my friends — each one of us even had an avatar in the sisterhood. (I was Lena because I was shy and Greek and loved art. Also my last name is literally in her last name.)

Truth is, truly ridiculous moments in Sisterhood of the Traveling Pants are few and far between. But, I still chronologically compiled all the things that warrant a double-take, be it classic teenage melodrama or incredulous expressions. Laugh, cry, share the pants, and tune in next week when I tackle this amazing film's sequel, The Sisterhood of the Traveling Pants 2.

1. The reckless abandon of undressing mid-store.

Oh, and that whole one-pair-of-jeans-fits-all thing is kind of weird, too.

2. The fact that the sisterhood meet in the abandoned, like... pre-natal yoga studio where their moms met.

Also the fact that it's so easy to break into.

The Sisterhood of Traveling Ew.

4. "I have to throw the small ones back. Would you like to help?"

5. When YiaYia is nonplussed that Lena has a man's t-shirt, and is all like, "Who's the lucky guy?"

She's only annoyed that it ends up being Kostas, because otherwise all YiaYia's just want to make sure their granddaughters have a husband, three children, and a goat by the time they're 23.

God, Bridget's dad is such a chatterbox.

7. When Kostas says he lived with his parents in America until they were killed in a car crash when he was 12, but he has the thickest Greek accent of all time.

Is it because they were from Greece too, or did he just revert to a Greek accent once he moved? Is this linguistically possible? I'm not even sure.

8. Lena, in response, cries, takes off her clothes, and jumps in the ocean.

The reckless abandon of undressing in the middle of a Greecian island as your would-be lover moves on.

9. WHEN LENA'S YIAYIA IS HANGING UP OCTOPUSES, WHAT THE HELL?

WHAT ARE YOU DOING?

10. When Bridget shakes her hair and grinds against Eric in an effort to seduce him.

Which elicits these side-eyes.

No, Carmen, no. You look like the entire world has failed you, but that's the fault of the pink taffeta, and not yours.

Is this how you soccer?

14. "Lol our new step dad's 16-yea- old daughter is out running around an unfamiliar city by herself, we should just enjoy this great dinner of salad and white bread with turkey and mayo. Delish!"

No, but the fact that her dad isn't worried sick is rightfully awful.

15. THIS, HOWEVER, IS NOT A RATIONAL RESPONSE TO ANYTHING.

16. "I guess I was kidding myself to think that when the pants arrived, they were gonna make everything better. I mean, I don't blame them for what happened."

I think it's really big of Carmen to not blame a garment for her father's distinct lack of parenting.

17. When, after four weeks together, Kostas is all, "I love you Lena."

18. The out-of-nowhere heart-wrenchingly dark turn when Bailey is dying of leukemia and Tibby's all, "These pants will give you a miracle. You have to believe."

And Bailey is all, "The pants have already worked their magic on me. They brought me to you."

19. When Bridget's summer fling shows up in wherever-she-lives (Maryland...?) to say that they shouldn't have boned.

Could this not have been done over the phone? How did he find out where she lived? I'm concerned.

21. "Hold that thought for one minute. I'm sorry. There's an important member of our family who should be up here with us."

22. "Oh, hey, you're the girl who threw a rock at our window, what's your name again, sweetheart?"