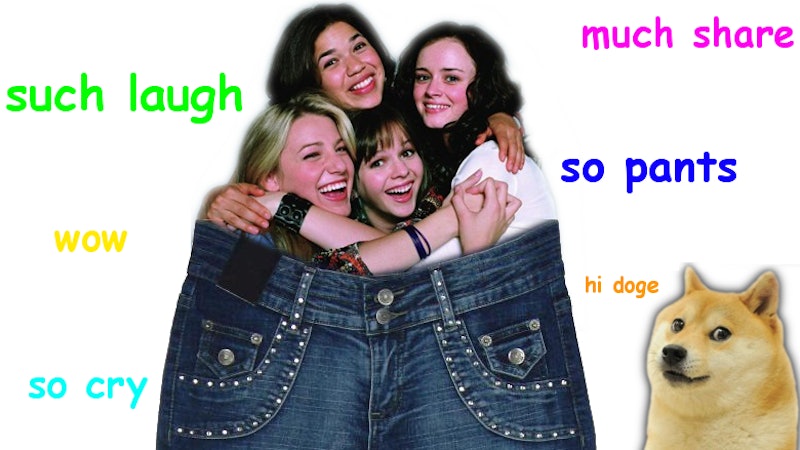 I feel like movie taglines can be hit or miss. Some are really great (Scott Pilgrim Vs. The World had a great one: "An epic tale of epic epicness") and some are the worst ( The Sisterhood of The Traveling Pants was: "Laugh. Cry. Share the pants" — seriously). In honor of The Sisterhood of The Traveling Pants' 10th anniversary, I thought it was time to envision what it exact means to laugh, cry, and share pants, as the terrible tagline says. I mean, it does sum up the 2005 movie, but it just sounds like a random command. Laugh! Now cry! Share the pants!

In 2012, Time Magazine named the tagline one of the 13 worst movie taglines, along with Yogi Bear ("Great things come in bears" — wait, what?), Night At The Museum ("At the Museum of Natural History, something unnatural is occurring"), and Clash of the Titans ("Titans will clash" — no, really?). Most of the posters both Sisterhood of The Traveling Pants and its sequel featuring its stars Blake Lively (Bridget), America Ferrera (Carmen), Alexis Bledel (Lena), and Amber Tamblyn (Tibby) laughing together among denim, but they're not doing much crying or pants sharing.

Well, I've decided to use my Photoshop skills to finally do something about it.

...Because the word "share" has a totally different meaning now than it did in 2005. Come to think of it, the foursome BFFs probably wouldn't have felt like they need a pair of jeans to share in order to stay close to each other over the summer in 2015 — they could just keep in touch via Instagram, Facebook, Snapchat, and Twitter like the rest of us.

Tears. LOLs. Everyone In One Pair Of Jeans.

Sorry, Alexis and Blake, but your expressions were more fit for tears than Ferrera and Tamblyn. As you can see, I'm a little obsessed with the idea of these BFFs literally sharing a pair of jeans at once. I mean, when you say "share the pants," I'm thinking literally and not mailing jeans halfway around the world (which is what it means in the movie).

What if instead of bringing the Sisterhood good luck, the jeans brought awful luck? Then they would keep passing it to each other after each calamity, not quite catching on that the pants are evil. Until later, when they must team up to defeat the evil pants from continuing its destruction on their lives.

Because if this Sisterhood is capable of overcoming its terrible tagline, then they're capable of truly anything.