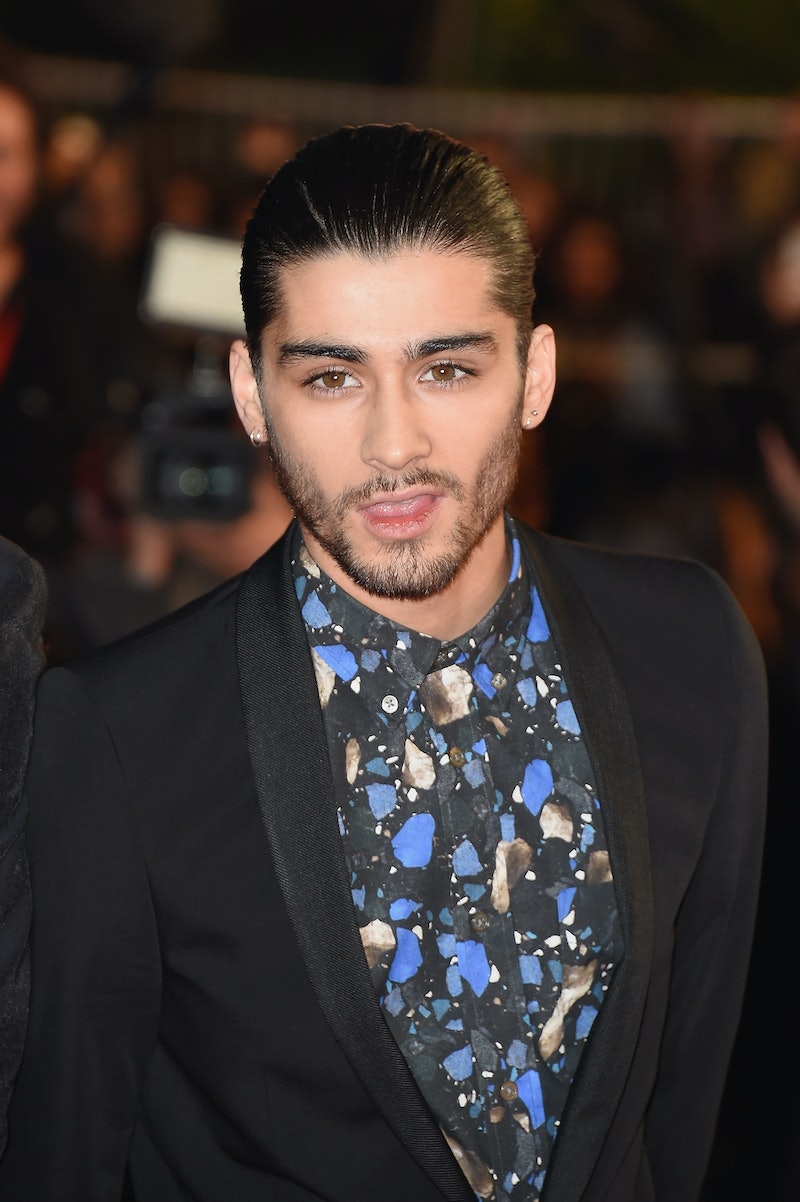 I don't know about you, but I'm still recovering from Zayn Malik leaving One Direction, and that happened more than four months ago. Even though Zayn was never my favorite 1D member — that's a spot in my heart reserved for Harry Styles and Harry Styles only — it was still heartbreaking to hear that the band went from five to four, and even more heartbreaking when band merch and photoshoots reflected the change. But even though I was unhappy with Zayn leaving, I could totally understand his reasoning. At the time, he said he wanted time to be a "normal 22-year-old" and live his life privately, and being that he hasn't had the chance to be a regular person in a long time, I can't fault him for that. But unfortunately, my understanding for him went right out the window this week when Zayn announced he actually left One Direction to record a solo album. Um, what?

On Wednesday, Zayn shared a photo on Twitter of himself signing a recording contract with RCA records, meaning that he's officially gone solo — and said that it's the real reason he left One Direction. That, in itself, isn't why I'm mad. Boyband members decide to leave and pursue their own career all the time, and Zayn's gotta bring home the bacon somehow. Why I'm mad: Zayn initially said that he left the band to be a normal person, not to put himself back in the spotlight in a different way.

I don't like being lied to, Zayn. Not after I have spent untold amounts of cash to see you (OK, to see Harry) in the flesh. And if he's going to record an album of his own, I have a feeling the track listing will look something like this:

1. I Enjoy Putting My Fans Through Emotional Trauma Just For Fun

You know, after he made us all think that he was disappearing into the beyond and we'd never see him again, but then pulled a bait and switch and came back out of the woodwork after sporting some very questionable hairstyles. LOL JK guys, I'm not going anywhere, I just wanted you to think I was. Jerk.

2. If You See Harry Crying, I Am To Blame

During their first show without Zayn, Harry broke down into tears — probably because he knew the truth and feels as betrayed as I do right now. And if you make Harry cry, you suffer the consequences. You know what, Zayn? I can't wait 'til I can buy a One Direction bedspread without your face on it. Traitor!

3. I Left One Direction Because I Am A Liar And Should Be Punished To The Fullest Extent Of The Law

Zayn, we're all (not really) adults here. If you wanted to become a solo artist, you should have said that in the first place. #Rude

4. I'm Still Not Married To Perrie Edwards, So Put Your Wedding Dreams Aside

But really, whenis this wedding happening? I need to know! They're just so cute together, and not even being mad at Zayn can change that.

5. I Admit It, Harry Is The Best Member Of One Direction And That's Why I Really Left

I understand. If I was in a band with Harry, I'd probably leave too. How do you compete with that?

6. My Solo Album Will Be Awesome, And You Won't Be Able To Hate Me Anymore Once I Release It

Because let's face it: As mad as any of us might be at Zayn right now, he's talented as hell and whatever music he releases will likely be amazing. In the words of the great philosopher Rihanna, I hate how much I love you, Zayn.