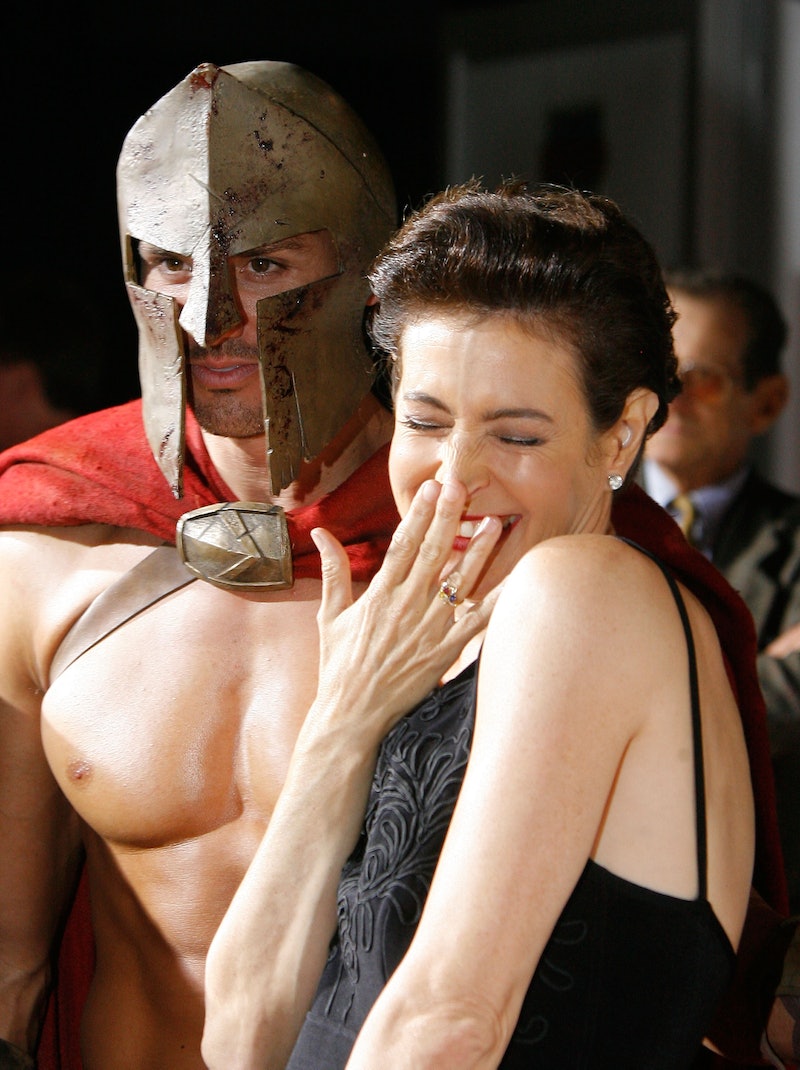 Following the ludicrous box office sales of the first 300 , Warner Bros. has decided to beat a cash cow until it dies, producing the sequel, 300: Rise of an Empire . Today they released a blood-soaked trailer, featuring all of our favorite stereotyped characters (except Leonitus because, duh, he's dead). Let's all remember why 300 was horrible, then see if it is possible for the sequel to be anything but a bigoted half-naked-men gore-fest. A hint: it isn't looking good so far.

Let's start by remembering the many bad tastes of 300, the original. We can start with the sex, for there is a surprising amount of it for an action flick, and it all made me want to gag. The pubescent girls who are drugged, forced to dance, and raped are the just the tip of the iceberg, and the creepy gifs that have been made in their honor only perpetuate this exploitative fantasy. Then we have Leonidus' wife, Queen Gorgo, who repeatedly echoes a "stand by your man" ethic, despite the fact that she has no rights. Oh, and she gets raped too, after being reminded that she has no rights. Lovely.

In that regard, the trailer for the 300 sequel might offer a slightly less awful perspective. In this installment, women take up arms. Even Queen Gorgo seems to lead an army, and even if this is misleading, the illusion of agency and free will is refreshing. Furthermore, the female villain, named Artemesia, looks like an intriguing new twist.

But my hope for the 300: Rise of an Empire stops there.

The primary problem with the original 300 (and with the graphic novel series it is based upon) was its terribly xenophobic racial dynamics. In order to portray the historical battle of Thermopylae (which 300 crassly translates to "hot gates"), the Greeks have to fight the Persians. However, since we are no longer living in years that end with B.C., the Persians did not have to be so misconstrued. Remember, in the movie they were portrayed as black or brown people who committed lewd sexual acts and enslaved their soldiers. Which sounds like a pretty accurate description of the real-life Spartans. The movie also came out when the U.S. was considering a war with Iran, and it became a piece of xenophobic propaganda. Since I am not of Persian descent and was in high school when 300 came out, I don't pretend to know the full offensive impact of 300's ignorance. Take a look at this author's analysis of the state of race relations at the time, and think about whether they will change much by 2014, when the sequel comes to theaters.

I am sad to say that 300: The Rise of an Empire will be no different than the original. The title is the first warning sign, since American film portrayals of imperialism and colonization have often fudged history, sometimes to make the colonizers look more sympathetic. Although the "empire" is not specifically referenced in the trailer, it appears that Artemesia has teamed up with Xerxes (still dressed in his ridiculous and unnecessary garb) to take over Greece. Although it appears that the brown-vs-white dichotomy may have been lifted, the combative portrayal of Persians remains. The hero who takes Leonidas' place is just as white, and he still leads the Spartans in a U.S.-Army-inspired chant. How wonderful.

The trailer for 300, part ugh, also comes with its fair share of cheesy lines and headache-inducing overwrought animation, but in the face of bigotry and xenophobia, the importance of the aesthetics seems small. I also wonder if Zach Snyder did not learn from the first 300's mistakes because people kept going to see it. So, let's all band together and skip this when it comes out in March, because it doesn't deserve a second round.