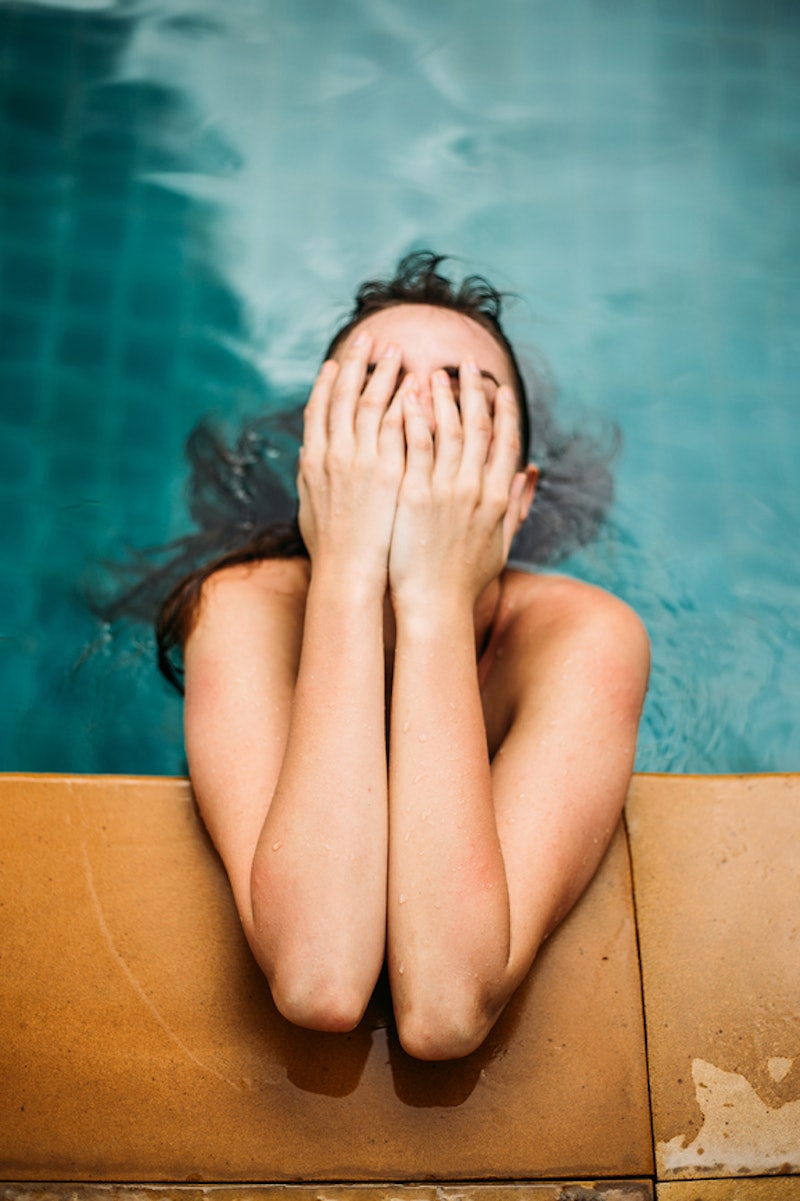 Despite what your stoic friends and family may think, panic attacks are very real. If you've ever witnessed anyone struggle through a panic attack, you know that it can be a scary sight to see — but it's even harder to stomach if it's you on the bathroom floor, hyperventilating and trembling and wondering why the light is so offensively bright. When a panic attack hits, your body goes into "fight or flight" mode and your sympathetic nervous system is put into overdrive; this makes you feel like you're no longer in control of your body. The adrenal glands shoot adrenaline and cortisol into the blood stream, tricking your mind into thinking there's a real danger present.

Half the battle in coping with a panic attack is identifying that you are, in fact, having a panic attack. Most of the time people assume the worst — that they're having a heart attack, for example — or they simply have no idea what's happening to them, which can be terrifying. I've had my fair share of panic attacks, especially during the days when I was coming to terms with my binge eating disorder (BED), so I'm well acquainted with the feeling of helplessness that exists at the very core of anxiety. In the midst of a panic attack, you often can't help but feel like the world is ending and there's no one around to help you out of the rubble.

If you are a person who occasionally suffers from panic attacks, remember that you're not alone. 3 million Americans suffer from a panic disorder at some point in their lives. Talk to a professional about it so you can figure out if there's a bigger problem going on. In the meantime, refer to the 7 phrases below that you can use to pull yourself through. They hold real value for me when I'm feeling overwhelmed, and they might be able to help you out in the same way.

Repeat this mantra to yourself over and over again. Regaining control of your breath is crucial when you're panicking and feel like everything is crashing down around you; it can help alleviate many panic attack symptoms symptoms by bringing oxygen to your brain and the rest of your body. Most of us take short, jagged inhales when we panic, and sometimes we don't breathe at all. This makes the heart beat faster and harder in the chest — and probably sends you to the next echelon of anxiety. One thing you can do with yourself is count your own breaths out loud. You can also try breathing into a paper bag (not unlike the adorable Julia Roberts in Runaway Bride) to prevent hyperventilation, though some doctors recommend against the practice.

You may snicker, but this one pulled me out of the hole a couple times. It may seem like an easy one to believe — until your heart is palpitating, your whole body is sweating, and you're suddenly lightheaded. Sometimes, when you're deep in a panic attack, it truly feels like your heart is about to stop and someone will find you in the back of the subway two days later in the fetal position — so a statement like this can be very powerful. And you'll be glad to know that there has never been a recorded death caused by a panic attack. Fatalities have occurred when the attack exacerbates other conditions, such as heart disease or asthma, but on its own, your panic attack will not scoop you out of this world. So you can say this to yourself firmly, with confidence.

I know it's going to work out because I (and other countless people) have been there before and we've come out on the other side. Sometimes you have to act your way into a feeling — the old "fake it 'til you make it" — and that applies here, too. The more you say this to yourself, the more you communicate to yourself that you will be fine no matter what — and eventually, your super stressed out mind will start to believe you. Medical professionals say people who are mid-panic attack need a calming presence, one that will help you put things into perspective. If you don't have access to a kind friend at the moment, you have to be that person for yourself.

This is especially important if you get hit with a panic attack in a busy place, such as the office or a Starbucks. You probably already feel like the walls are crashing in on you and you might even hear a high-pitched ringing in your ears, in addition to the loud noises already surrounding you. It is highly recommended that you leave the congested area and go to a quiet, peaceful place. Try to make it an open space, though. A lot of the times, our first instinct is to crawl into a small, dark spot (our closet or the back seat of a car), but that could potentially make you freak out more. Go somewhere that preferably has lots of fresh air, sunlight and room to move around.

5. "This Is Only Temporary"

The big picture is hard to see in these kinds of circumstances. We zoom in on the problem at hand, the one that has sparked our anxiety, and convince ourselves that it is the only thing of importance in the world. I know because I was a champion of this; I used to believe that the smallest things would ruin my whole life and there would be no way to come back from it. That's simply not true, no matter how awful you feel. This panic attack will pass, just like everything else in the universe, and the sooner you start believing that, the sooner you will be able to pull yourself out of the hole.

This one is often hard to stomach when someone else says it to you in an attempt to calm you down. But I found that when I repeated it to myself while panicking, it was much more tolerable. The truth of the matter is things could be much worse; whatever you're going through at the moment probably isn't even the most terrible thing you've experienced. It's the build-up of stress that has you thinking you're at an all-time low. A good way to counter this is by naming your blessings. Recite all the reasons why your life is awesome — this can help bring you back.

Your mom, your best friend, your yoga teacher, and so many other people in your life care about you — a lot. You'll have to remind yourself of this fact when your head is between your legs, pounding with worry, but it can definitely help you find the light at the end of the tunnel. I developed a useful habit to utilize when I was mid-panic mode: I named all the individuals I knew who would be willing to walk into my apartment and give me a big hug, without needing a reason to do it. I visualized it in my head and I suddenly felt like I was getting 50 hugs at once. Don't forget that the ones who matter will love you no matter what.

More like this
I'm Going Off My Bipolar Meds to Try to Get Pregnant
By Anonymous, as told to Anna Goldfarb
The Latest Instagram Trend? Crying On Main.
By Ashley Sumner
6 Abortion Advocates To Follow On TikTok
By Sara Youngblood Gregory
You're Probably Doing These Gross Things Around The House Without Even Realizing It
By Rachel Bar-Gadda
Get Even More From Bustle — Sign Up For The Newsletter