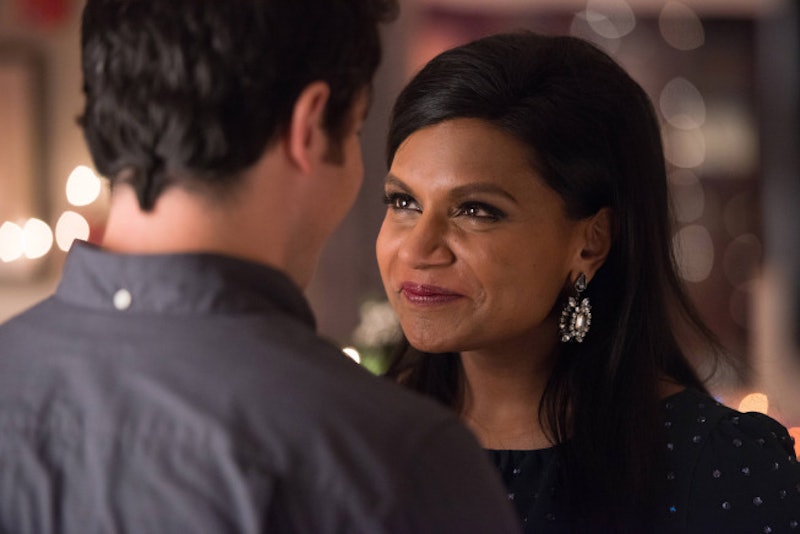 By now you've hopefully managed to witness the single greatest moment in the history of FOX's hilarious and delightful The Mindy Project. We are, of course, speaking about the climax of Tuesday night's episode, "Christmas Party Sex Trap," when a down-on-her-luck Dr. Lahiri (Mindy Kaling) is offered up the ultimate Secret Santa present: witnessing the shockingly smooth (and totally sweet) dance moves of Dr. Danny Castellano (Chris Messina, a.k.a. the dream boatiest) to one of 2000's biggest earworms: Aaliyah's "Try Again." If you haven't, well, I'm just not really all that sure what sort of monster you are and what more convincing you could possibly need to sit back and take in the greatest 57 seconds you are sure to encounter in all of your days and years.

Hyperbolic? Maybe, but really: all you're doing is depriving yourself of what is sure to be at worst a hilariously endearing and awkward moment of time... or the single sexiest and endearing sweetdork thing to ever happen in recent television romantic comedy history. What more can I do to convince you? Call a gaggle of corgi puppies to hop on their rainbow-jumping unicorn buddy's backs and float the video in front of your face? Call upon the sun gods to open the gates to heaven where they'll reserve you a seat on the comfiest, most ergonomically designed cloud so that you might maximize your viewing pleasure? I can't do any of that! I am only one person. One very weird, very clearly over-enthused person. So do yourself a favor and take a look, now. NOW. Do it! Seriously:

Now if you're at all like us, you've probably been out cold for the past 10 minutes, overcome with joy and an intense sexual attraction (if it wasn't already there, and if so — I pity you) for Chris Messina/Danny Castellano. Those moves! That face! The delivery — all of it was perfection. My only complaint is that a.) they cut way too many times to Mindy, prohibiting us from maximizing the dance's perilously small screen time, and b.) there better be a full-length version somewhere that's being uploaded to YouTube as we speak. Not that we're threatening anyone or anything, Fox. But I mean it is the holidays and all so why not show us a little bit of that spirit, eh?

Still, like Icarus before us, we're afraid that we've flown too close to the sun and Danny's miraculous, impressive, romantic, and — above all else — intensely sexually stimulating dance routine (oh wait, is that just us?) has ruined us. Damn you, Mindy Kaling. Damn you, early aughts nostalgia. And damn you especially, Chris Messina's face, and body, and aptitude for movement. Damn you, especially!

Because unfortunately for us plebes, we live in the real world. A world where no man — especially not one with the dreamy-yet-comforting gaze of a woodland animal coupled with the luscious, smirky lips of a 1970s Italian model — would ever attempt such a thing to get in our good graces. And when you're thrown into the emotional manipulation blender that is television, it can sometimes be hard to pull yourself back into reality with an obsession such as this (I mean, so we've heard, since we're clearly a very rational and level-headed being, cough).

So we've come up with a foolproof plan to bring you back to the land of the living, where the most romance you're apt to receive on any given day is the equivalent of a Facebook poke from an old drunken hook-up, or a winking emoticon from the guy you met that one time at a bar who you put in your phone as "Creeperton Jones the III."

Step One: Read the Headlines on Google News for "Florida Man"

Step Two: Re-read the Saga of Diane in 7A from Bachelor Producer Elan Gale

Step Three: Remind Yourself That Male and Female Brains are Scientifically Wired Differently

Step Four: Cry Into Your Wine as You Pop in Bridget Jones' Diary for The Umpteenth Time

Step Five: Accept The Fact that Romance Isn't Real But Rather a Construct and Illusion Created to Sell Entertainment as You Scroll Through Your Tinder Matches

And if all else fails, you can do what most people do: live in your own delusions of grandeur and hopeless romanticism until you find the human of your dreams or die. Whichever comes first!

Or there's always these GIFs if you get lonely:

Nope, OK, we give up: we're perfectly fine accepting the fact that we're a lost cause forever and always.