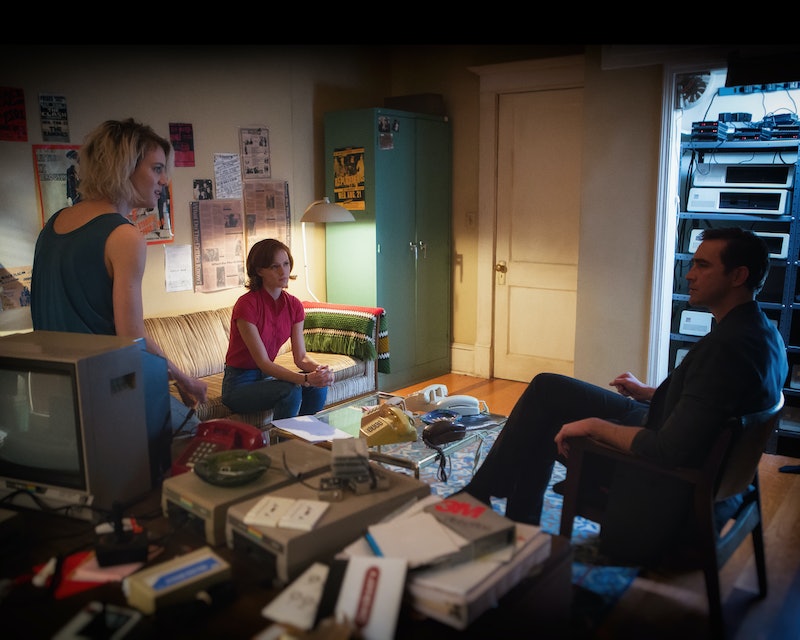 I admit it — I'm one of the (possibly few) Halt and Catch Fire fans, one who watches as intently as I did with its network predecessor, Mad Men. But while Mad Men inspired a following, spawning office water-cooler conversations, inspiring fashion trends, and launching a thousand think-pieces after every episode, Halt and Catch Fire hasn't really engendered the same kind of devotion. That's a shame, because, if you as me, Season Two is even better than the first, and the show is really hitting its stride. But, as it wraps up its second season on August 2, I have to wonder if this it. Will AMC renew Halt and Catch Fire for Season 3?

If you're looking from a strictly numbers perspective, it doesn't look good. According to TVSeriesFinale.com, the first season of the show averaged around 760,000 viewers — a number so low, people were shocked when it got renewed for a second season. Well, Season 2 was even worse; now, it only averages around 530,000 viewers each week. Still, numbers aren't everything, right? If they kept it around last year, they should keep it around for another. Here's why.

Those looking for hope there may be another season of Halt and Catch Fire should look no further than this summer's The Thing, aka The Fantastic Four's Jamie Bell (who's high on my list of backup husbands). His AMC show, Turn: Washington's Spies , saw a similar drop in ratings between its first two seasons. And yet, it was renewed! Huzzah! To be honest, Turn's ratings after its drop are closer to Halt and Catch Fire's first season than second season, but it shows that AMC doesn't just look at hard numbers. Buzz and prestige are important, too.

What Could AMC Air Instead?

Right now, the network doesn't really have anything waiting in the wings to slot in if Halt and Catch Fire gets canceled. We all loved Mad Men, but Mad Men is gone. The network has to put something on between Walking Dead spinoffs, right? It might as well be Halt and Catch Fire (although, to be fair, Humans is doing even better than Halt—but we can ignore that for now).

It's Getting More Attention

I wouldn't go so far as to call the show buzzy, but I do think more people are on board this season — I'm hoping this isn't just confirmation bias — and it is starting more larger conversations and analysis. There are more stories like John Teti's excellent piece in The AV Club about how the show uses the red/green/blue color palette to express its ideas. Sometimes, a dedicated, thoughtful viewership matters more than hard numbers (at least I hope that's he case). It also received an Emmy nomination — sure, it's for the credit sequence, but recognition is recognition, right? Prestige!

Cameron Is One Of The Best Female Characters On TV

This year, the season has mostly shifted focus to the ladies, which is awesome. Even better: It takes them seriously as business owners. Donna and Cameron are off making deals, growing their company and solving (numerous) catastrophic problems on their own. When men but in, it usually makes things worse, not better, for the company. And while they both have fascinating arcs this year, Donna's can veer towards more typical storylines about balancing her ambition and her family. Cameron's is the most refreshing; she's a creative person who wants to build something on her own, but she has to learn how to be a strong leader and get everyone else on board with her vision. I'll take that over ten will-they-or-won't-they romances any day.

It Shows The Flip Side Of Silicon Valley

Even though Halt and Catch Fire is a period show, it actually resonates with a lot of what's going on today, and can be put right next to Silicon Valley as a commentary on what it means to be in the tech world. (Also, both shows have a loveable band of misfits trying to get tech corporations off the ground, so it's funny that the one set in present-day is the one that's mostly about white dudes, and the one set in the '80s is much more diverse. I love Silicon Valley; I just think the differences between the two are unexpected.) Jason Hirschhorn, a former co-president of MySpace, tells The Week that Halt actually gets a lot about today's startup culture right, including, "the exhilaration of building something from nothing, the creative and philosophical tensions that pit a company's founders against each other, and the existential crises along the way." And, also, apparently, the agony of eating all your meals from the startup's toaster.

Who Will Invent Anything If They Leave?

If there's one ridiculously enjoyable thing about Halt and Catch Fire, it's the way the show credits its own characters for pretty much every computing innovation since 1983 that doesn't have a small "i" in front of it. I'm pretty sure they're claiming Cameron alone has invented the internet, cable modems and first-person shooter video games. Donna invented chat rooms, and Gordon had the idea for a business that basically seems like a precursor to Dell or Gateway. If they cancel the show now, who's going to invent the tablet or smartphone?

Who can say no to this face?