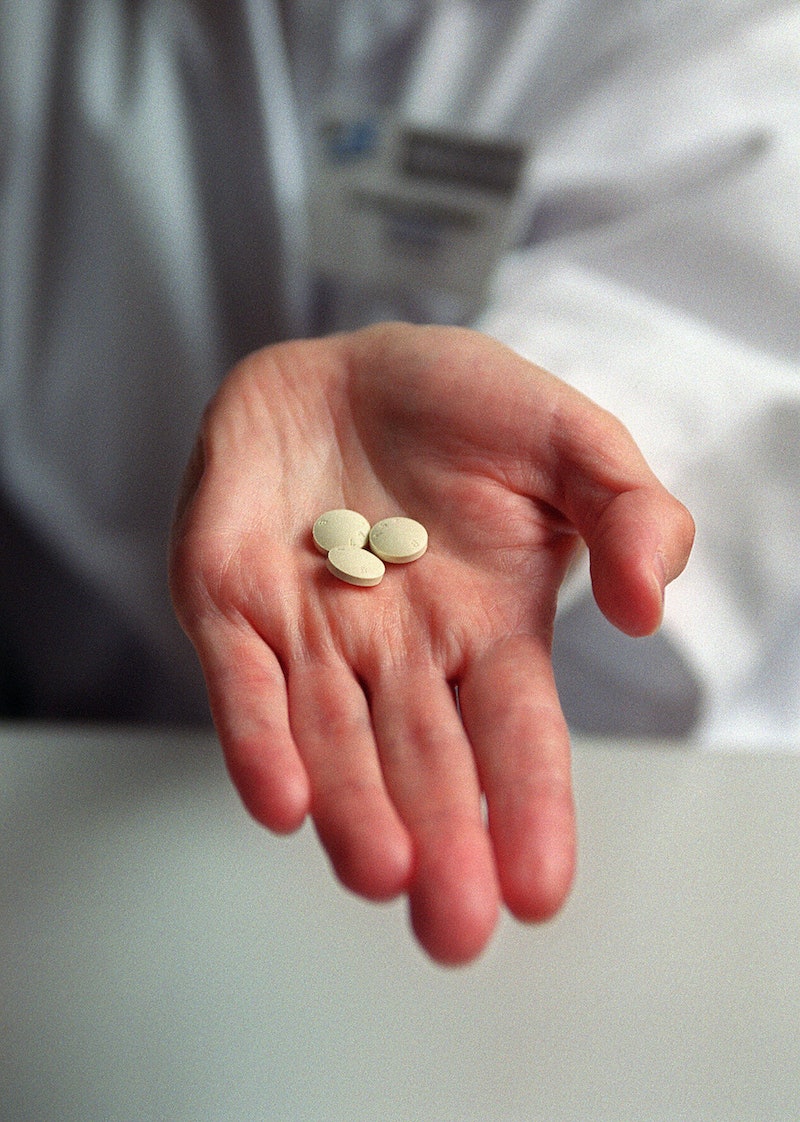 Well, Canada's got it all now: Nice folks, delicious maple syrup, and a legal abortion pill. Maybe that last one's not on your list if you're just stopping through Ontario for a family road trip, but access to health care for women is no casual item to jot down on a list to maybe cross off at some point. So on Monday, when Canada legalized the abortion pill RU-486, known as mifepristone, drug regulator Health Canada made some top-level progress for the country's women. The pill will be marketed in Canada under the brand name Mifegymiso, reported The Huffington Post. Mifegymiso isn't a miracle pill, of course. To receive the drug, a woman must have a prescription from a physician, and the pill can only terminate a pregnancy before seven weeks, or 49 days, into the gestation period. But Mifegymiso will truly help women without access to abortion clinics in the rural areas of Canada.

Canada is actually pretty progressive when it comes to the issue of abortion as a whole. The country first decriminalized abortion in 1969, according to Pro-Choice Action Network. The website reported no waiting periods and no parental or spousal consent laws, which is something the U.S. could stand to emulate.

But when it comes to this abortion pill, Canada is severely lacking on the reproductive justice timeline. The Huffington Post reported that RU-486 has been approved in more than 50 countries and has been sold legally in the U.S. for 15 years. The U.S. isn't exactly the country you want to be comparing "who's better at abortion" cards with (see: recent archaic legislation in Texas, Missouri, Kansas, Arizona, etc.), so it's about time Canada caught up in this regard. First, let's take a moment to do a celebratory dance for Canada and its new health care milestone.

Although Mifegymiso only offers a small window of time to terminate a pregnancy, it's an otherwise inaccessible window for some Canadian women. In 2013, Vice's Tamara Khandaker interviewed women in the British Columbia region of Canada who said they don't have adequate access to abortion care. Rural providers said they often felt that they have to keep their work secret, and if there are clinics, they don't have near the amount of staff needed to provide care. Vice reported that in Kamploops, BC, alone, there are 400 women on a wait list to receive abortions, meaning many of them cannot get the help they need. Many of these women have to look for abortion services elsewhere or resort to self-abortions.

In addition, CBC News Canada reported that one in six hospitals in Canada provide abortions, mostly in urban areas. In the U.S., just 4 percent of hospitals provide abortions, and women rely mostly on clinics to provide the service, according to ThinkProgress. Although it is a new drug to Canada, and the road to progress is still ahead, Mifegymiso is an important answer to the North American country's lack of reproductive healthcare.

When it comes to this pill, there are some caveats. Women with ectopic pregnancies — when the fetus grows outside of the uterus — or women with an IUD cannot receive the drug. And according to the Huffington Post, Health Canada's regulations state that an ultrasound must be performed before the drug can be administered by a physician.

The physician must also be certain that the patient has access to health care within two weeks of taking the drug and must schedule follow-up visits a week to two weeks following administering the pill. If the pregnancy continues, CBC News Canada reported, birth defects can occur with the fetus.

Mifegymiso is a true abortion pill, not the morning-after pill, which is only effective a mere 72 hours after sexual intercourse. The fact that Canadian women have this pill in their pocket doesn't mean all problems are solved, but they are one step closer to getting the health care they deserve.