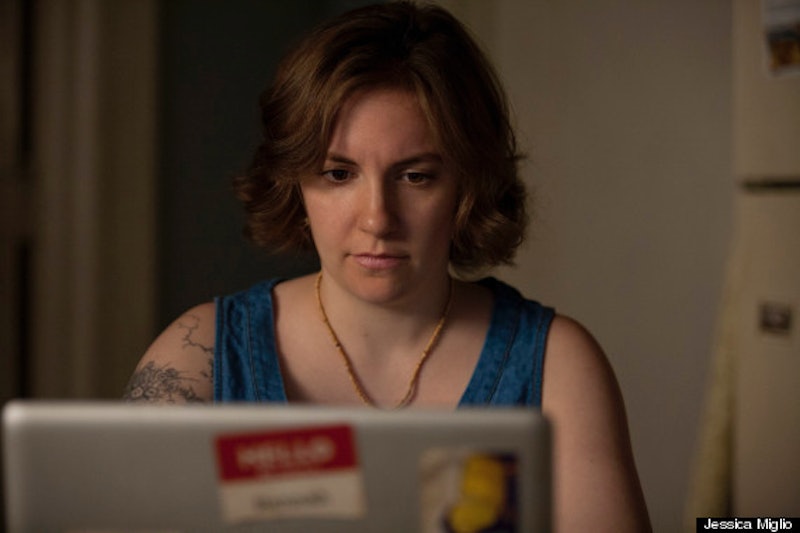 Ever wanted to date a writer? Are you prepared to wade through the coffee addiction, the serious depressions whenever another rejection letter comes in the mail and the possible instability, all so you can enjoy the company of a word-fluent partner who can take you to book launch parties? Well, ears up. I'm about to give you some guidance. And by guidance I may mean "warnings disguised as various kinds of advice."

I'm the classic "writer living by her pen/the skin of her teeth": by day, I work for Bustle, and by night I'm a professional librettist for opera, as well a novelist currently drafting my second book. This sounds glamorous, but basically involves a lot of cookies, yelling about bad WiFi connections and sighing resignedly when yet another person (usually younger than me) gets a book deal. Dating a writer is also not glamorous, no matter what you may have seen at the movies: writing is not exciting to witness, dating a writer will not get you into any clubs worth being in, and we are not all delectable Oscar Wildes dripping charm and dropping bon mots at dinner. We're hopeful hermits, who are going to be sulky hermits when our current chapter isn't working out. Still in? All right.

Here are fourteen things you should know before you date a writer. If you come away feeling as if you shouldn't touch one with a ten-foot pole, I will consider my job done. If you relish a challenge (and were rejected by that bear-wrestling course that you applied to), though, this may be of some use to you.

1. We Do Not Date People Who Don't Read

You don't have to be a massive book nerd — but having at least a love of words will get you a long way with a writer. And I mean a genuine love of words, not just a love of throwing around lots of multi-syllabic words to make you look smarter. We will not be impressed. We own thesauruses, too.

2. Saying "How's The Novel Going?" Will Likely Get You Shot

Remember: we will update you on our writing progress, not the other way around. Writing can be a very frustrating process, and we may feel like utter failures when we can't get something to work out. Plus, most good work takes a lot of time (take however much time you think good writing might take and add a lot more time). So sit tight — you'll read it when we're ready, I assure you.

3. Your Blind Faith That We Will Immediately Succeed Is Lovely (But Unrealistic)

Rejection is an enormous part of the writing game. It can be harrowing, and if you're convinced that book deals just drop from the sky whenever a person is talented enough, you're not going to be a very helpful companion to a writer. If you're looking to date a writer and offer serious, useful advice, read up on the publishing industry and the process that goes into the publication of a book in their genre.

4. You Are Not Allowed To Read Anything We Write Without Permission

I don't care if our new draft is lying in full view in the middle of the living room and you need to rescue it from a cat hellbent on tearing it to shreds. Our work is always off-limits until we ask for your perspective or views. We may not all be precious about it, but it's probably best to respect the professional boundary.

5. If We're Being Pretentious, You Should Let Us Know

A not-insignificant number of writers are d*cks who spend their time scribbling in Moleskines, drinking bad red wine and making other people feel bad. Do not date writers who act like this all the time — and if we start acting like this, don't be afraid to call us out about it. Being a writer is no excuse for being pretentious or insufferable (who has time?), so if that's what we're doing, tell us — or dump us to teach us a lesson.

6. We Need To Party Sometimes

Writing is an introverted and exhausting activity, particularly if you're on a deadline, working on a tricky commission, have an editor hanging over your head or something else of the sort. After that period, we will probably explode with a desire to see you and have fun poking you/dancing/drinking/generally acting like a human again.

7. We Will Not Tolerate Plot Holes In Films And TV

If you're spending a lot of your time making sure that your own narrative structure makes sense, plot-related laziness in others is bound to frustrate you. We'll likely still enjoy the dumb action flick or the ridiculous opera while it's happening — we'll just be belligerent about the stupidity of that plot hole on the way home. (True story: after watching Prometheus, another writer friend and I nearly got thrown out of a Thai restaurant for complaining about it too loudly.)

8. Your Family Will Probably Worry That You're Dating A Bum

Writers don't have the best reputation as sensible, stable partners. I'm lucky that I married into a family of opera singers and academics who are reasonably laid-back about the idea of one of their offspring hitching themselves to an author, but in many relationships, the family of the non-writer will wonder when the writer is going to "get a real job" or other such nonsense. The "penniless" stereotype is a very old one that we hear a lot, but many of us are doing perfectly fine, thank you very much — so it'd be cool if you reminded your family of that.

It's awesome that so many people in the world want to be novelists/lyricists/poets/historians. Fill the world with your stories! But most of us have heard the "novel in me" idea before, and if we're currently in the struggling, not-particularly-rewarding phase of trying to wrestle one out, having somebody tell you about the novel they're blithely not writing can be a bit off-putting. (Also, following this up with "but I had so much real work to do" is definitely not going to get you laid.)

10. We'll Experience A Lot Of Rejection, And You're Going To Have To Help Us Through It

I've written a novel that's been rejected by so many agents, I long ago lost count. When you think about all of the failure and rejection that are part and parcel of writing — trying to sell a not-terribly-commercial-book in a commercial writing market, facing up to harsh critiques and reviews, being rejected by publishers, journals and prizes — you realize that the writing is actually the easy part. We have to keep putting ourselves out there to be successful, and the setbacks are frequent and painful, so we have developed a thick skin – but your support (and ice cream) are also very nice.

11. We Will Either Be Obsessively Writing Or Totally Procrastinating

The stereotype of the genius writer casually dashing off a few genius lines and then strolling off to smoke some opium is not true (though we may wish it was). Writing professionally and/or seriously takes rigid self-discipline, whether it shows or not. But it's also very easy for us to haaaaate doing it when it's difficult, and become world-class procrastinators. This is probably going to be confusing to watch.

12. Don't Ever Stop Us From Writing Down An Idea

Inspiration doesn't usually just turn up at two in the morning and dance around our heads, demanding that we take notice right this second. But sometimes — usually when we're relaxing, thinking, or about to go to sleep, but often when we're spurred by some other thought or event — we'll get a good idea. Please don't get in the way if we want to quietly write it down. And if you really want us to love you, carry an extra pen with you.

13. Don't Tell Us To Write Something More Commercial

I know Harry Potter was very successful. And 50 Shades. And Game Of Thrones. But I don't write children's fiction or erotica or fantasy — it's not what I'm good at! — and if I did, I wouldn't appreciate the comparison. I your love is trying hard to find their particular niche in the publishing world, don't naively tell them to "do something like that one famous book." (Feel free to tell them to add more boobs to their story, though.)

Or at least it better not be. If you're dating a writer who keeps putting your fights into print — or worse, depicting you as a miraculous creature that your real self could not possibly hope to live up to — dump that hell-beast and get out immediately. That's not being artistic; that's just rude.