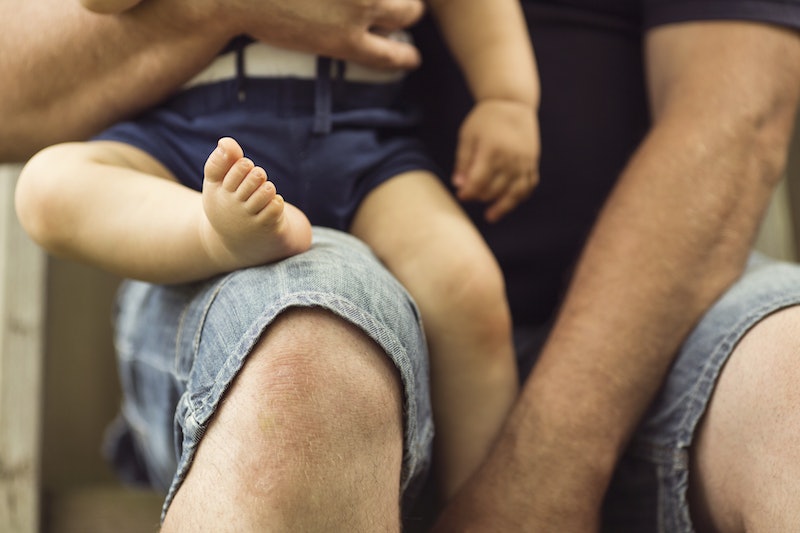 When it comes to shattering gender stereotypes, we've definitely come a long way since the 1950s, but according to new research, we may not be doing quite as well as we once thought on that front — at least not once we become parents. An Australian study from the University of Queensland has found that new fathers become pretty sexist after having their first kid, reverting to increasingly traditional views on gender roles once their wives become mothers. As a result, women wind up bearing the brunt of household chores, and other stereotypical "motherly" things — yes, even in cases where both spouses work.

Looks like we have Aussie social scientist Janeen Baxter to thank for these depressing findings. Baxter, who is the director of the Australian Research Council Centre of Excellence for Children and Families, worked with a team of researchers to survey more than 1,800 new parents for the study, and wrote about the results in a blog for Children and Families. "New fathers appear to shrink women's identities as workers, shifting to a more traditional view of women as caring mothers and housekeepers," wrote Baxter.

As for how the researchers arrived at all of this, Baxter and her colleagues asked men and women to rate just how strongly they felt about a bunch of different parenting issues — before and after they had their first child. Most notably, women showed a 4 percent increase in their support of the idea that "a working mother can establish just as good a relationship with her children as a mother who does not work for pay." Men, on the other hand? On average, they became 0.1 percent less supportive of that idea. And while admittedly, that's not exactly a huge dip, it's still headed in the wrong direction. Also, there was this, according to Baxter's blog:

In our study, new parents gave additional priority to women’s roles as mothers. Both sexes changed their previous views to support more strongly the ideas that a woman’s main role is being a mother, that mothers should work only if they need the money, and that young children should not stay in childcare for prolonged periods of time. However, despite the apparent contradiction, women also believed more strongly than they did before the birth that working women can be just as good caregivers as stay-at-home mums. We found that new mothers became less likely than before to say that working mothers care more about their careers than about their children.

So why the shift? Baxter ties the slip back to traditional gender roles to one likely culprit: the logistical nightmares of being a parent. As Baxter writes, the role assignments have to do with the way we organize work, parental leave arrangements, public services for children, schools, and even social networks. Together, she says, these factors "create structural barriers to involved fatherhood and also encourage the traditional social construction of women's mothering role."

And as for why all of this seems to happen right after a couple has their first child, Baxter has this to say:

Such changes are consistent with other research showing that transitions, such as leaving home, leaving school and getting married often mark important turning points in how people organize their lives and, potentially, their attitudes. Attitudes are not stable over the course of someone's life.

Hmm... so it looks like men aren't totally to blame for the shift — after all, women are playing a role in it all, too. But as licensed marriage and family therapist Paul Hokemeyer told Yahoo Parenting earlier this week, the key to busting through it all is to be conscious of when you're slipping into "detrimental patterns and gender stereotypes." Aside from just being more aware of them, Hokemeyer urged parents to divvy up tasks like grocery shopping and diaper changing before their kid comes along — and make the division fair.

Of course, none of this will really work if both parties don't actually stick to it. (Which is easier said than done.) "Do what you agree to do," Hokemeyer advised. Otherwise, "frustration quickly morphs into anger and resentment — and these negative emotions are draining," he says. And after all, who wants that? New parenthood definitely comes with enough draining moments on its own, amiright?

You can read Baxter's full blog here, on Child and Family.