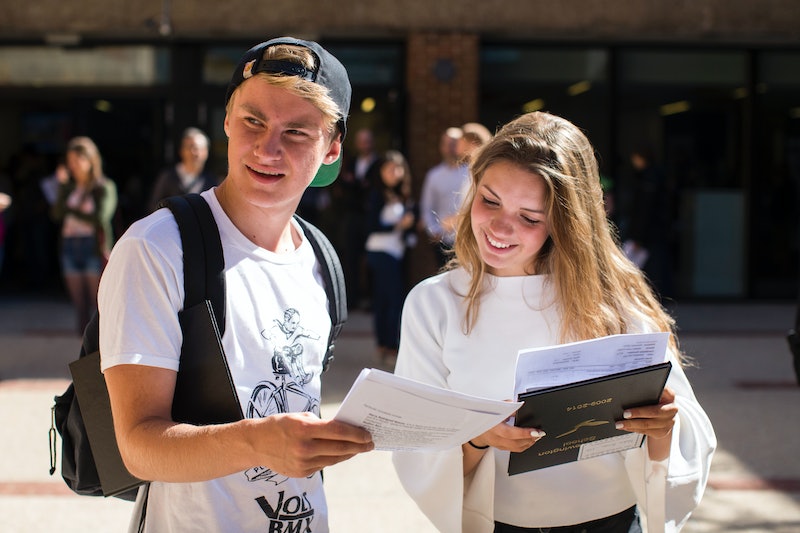 Most people have heard of the "Friend Zone," the phenomenon when you like someone and they only think of you as a friend. But whether you like the term or think it's been used in some very sexist ways, science suggests that the friend zone isn't as much of a thing as we think it is. Basically, it seems that most people actually do believe that platonic relationships between men and women are totally possible, meaning we think we can be friends with someone of the opposite sex without it being "the friend zone." And the study also implies that most people don't see being in the friend zone isn't as big a deal as you'd think.

The study in question was conducted by researchers at the University of Alabama, and used surveys to get at people's real opinions about male/female friendships. Plenty of studies have suggested that platonic friendships between the sexes is difficult, and past research has also suggested that people are mostly friends with people of their same gender (the major exception being gay men befriending straight women). However, even if platonic relationships between straight men and women are rare, the survey responses indicated that they think they're completely possible. And that's actually pretty encouraging.

Men and women aren't actually all that different, and two people of different genders can find plenty of reason to want to be around each other without sex or romance entering into the equation. So it's good that our society is slowly getting used to that idea.

Of course, the researchers also asked how often participants thought such friendships might involved hidden romantic feelings, and on average, people estimated that this probably occurred about 63 percent of the time.

So that was nice while it lasted. But although otherwise somewhat discouraging, these results actually make the whole idea of the friend zone even more interesting. The friend zone implies that one party has romantic feelings for the other but that this other person has placed them firmly into the "friend" category with no interest in anything else. (And then, of course, the trouble starts when people act like this is an unfair thing to do.)

However, in this study, people acknowledge that men and women can still be friends even if there are secret feelings in the mix somewhere — in fact, participants on average believe that secret feelings are usually involved, but that male/female friendships are definitely still possible. Meaning one person having feelings doesn't invalidate the friendship or make continued friendship inherently impossible.

All of which suggests that most people don't see the friend zone as such a big deal. Men and women can be platonic friends. Sometimes, maybe even frequently, one or the other has non-platonic feelings. It happens.

Of course, you'd need to actually study this issue specifically to know for sure how people feel about the friend zone. But the implications here are still a very positive indication. So good for you, society. Way to tell the friend zone who's boss.