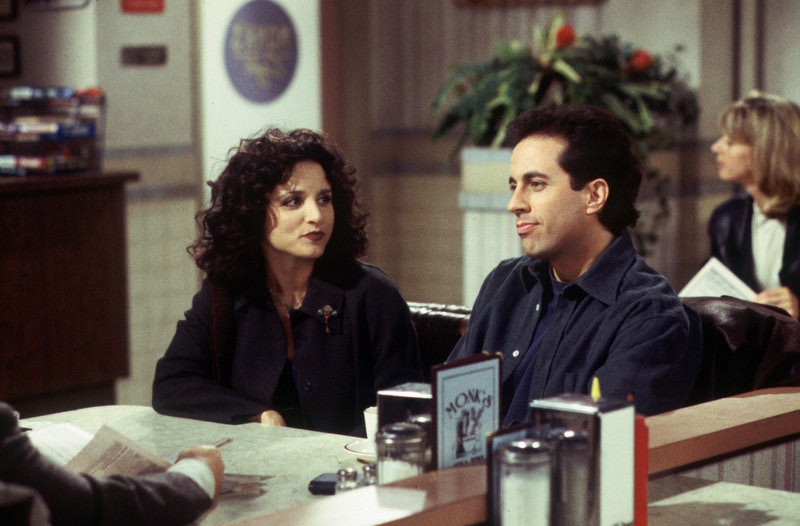 For most of my life, I've been a woman with male best friends. I don't mean that in some gross, off-putting "I don't get along with other women because I am way too sexxxy" kind of way — most of my friends do happen to be women. But for whatever reason, I've typically also had more close male friends than the average lady.

When you're a woman with a male best friend, people think that you're up to something. They can't quite agree on what it is — are you trying to get laid? Trying to inflate your ego by being the "cool girl"? Trying to do both at the same time?

And even if all that judgment doesn't bother you personally, you still have to deal with the weird hang-ups of your other friends, your family, and even science. There are new psychological studies conducted seemingly every year devoted to picking apart the extremely pressing question of whether men and women can be friends, even though they never seem to come to any concrete answers. (Over the course of two years, Scientific American covered one 2012 study that claimed that men and women can't be friends because men are disgusting horn-dog monsters, and one 2013 study that showed that men and women can be friends.)

And yes, sometimes, male BFFs do end up becoming something more. But often times, they don't. And no matter what happens, women with male best friends aren't pulling some kind of sexual long con. I'm not saying we deserve a medal for dealing with the pressure of everyone's suspicions and expectations and still managing to maintain kick-ass friendships in the process, but ... okay, maybe I am saying that. Here are 34 things only we women with male best friends truly understand.

OKAY, THERE ARE A FEW THINGS THAT ARE DIFFERENT WITH YOUR MALE BFF

Even if he's one of the girls, or you're one of the guys, the male-female BFF dynamic has a few subtle differences from other kinds of friendships.

LIKE, YOU GET TO BE AN UNQUESTIONED FASHION EXPERT AROUND HIM

Even if you keep your own clothes in a giant pile in the middle of the room, you're basically Rachel Zoe when he's trying to figure out which pair of khakis to buy (try to talk him out of the ones with the pleats kindly, if you can).

YOU TEND TO GET AWAY WITH DIRTIER JOKES

I'm not saying none of your female friends want to hear that joke that ends with the farmer's dick falling off in the automatic milking machine; I'm just saying male friends are usually a more consistent audience for your "blue" material.

AND THOUGH HIS COMPLIMENTS ARE ALWAYS A LITTLE WEIRD, YOU APPRECIATE THE EFFORT

It's as if every few weeks, someone tells him that women like to be complimented, so he says something nice about your hair (even if it looks exactly the same as it always does).

HIS DATING ADVICE IS BIG BROTHERLY

Your female friends will carefully listen to the unique elements of your current dating drama, and come up with thoughtful and relevant advice; your male friends will tell you that this guy is an asshole. No one hears more about how guys are "all animals" than a woman with a male best friend.

SO WHEN HE ACTUALLY GETS ALONG WITH YOUR NEW BOO, YOU KNOW THEY'RE A KEEPER

His approval means a lot, which is terrifying, if you think about it.

BUT FOR THE MOST PART, YOU DO THE SAME THINGS ALL BEST FRIENDS DO

You know: hanging out, confiding in each other, watching hilariously bad movies, picking out neon tie dye t-shirts together. Typical friendship stuff.

You try not to care, and just focus on your awesome friendship. But it can be really exhausting to spend so much time correcting people's perceptions and answering their super invasive questions.

EVERYONE ASKS IF YOU TWO ARE DATING...

...EXCEPT FOR THE PEOPLE WHO JUST ASSUME THAT YOU'RE DATING

Has it suddenly become really trendy for people who are dating to never touch each other? Is that why everyone assumes that you're dating?

AND THEN, THERE ARE THE PEOPLE WHO THINK YOU SHOULD BE DATING

Their advice usually goes something like this: "Romantic chemistry, schromatic chemistry! You already like his personality, he's located conveniently near to you, and he has genitals and everything! What are you waiting for?!"

OR THAT YOU'RE JUST TRYING TO GET ATTENTION FROM OTHER MEN

These people have clearly never had a male best friend, for there is no easier way to make sure that no guys talk to you for an entire night than to show up to a bar with a male friend in tow.

OR THAT YOU'RE SECRETLY IN LOVE WITH YOUR BFF

I mean, you couldn't just have things in common and complimentary personalities, right? There has to be an END GAME!

And if you protest that this isn't true, you get a big hot earful of "He's just keeping his love a secret from you!"

Really? Half the population can't be friends with each other?

NOT TO SAY THAT YOU HAVEN'T WONDERED WHY YOU'RE NOT DATING

It is true, you do have a lot in common, like a shared history and a passion for mini-golf — and isn't that the true backbone of every good relationship?

COULDN'T YOU MAKE IT WORK?

Does love have to sweep you off your feet? Maybe you guys could learn to be attracted to each other, the way your grandma keeps telling you.

MAYBE YOU TRY AND FIND OUT

This is usually proceeded by A. a terrible break-up, B. the consumption of a metric ton of liquor, or C. both.

AND SOMETIMES, IT DOES WORK

These are the jerks that encourage everyone else in the world to announce that you and your male BFF will eventually realize that you're in love with each other.

OR AT LEAST, FOR A WHILE

Yes, okay, fine, everyone was right — it's fun to date someone that you already have so much in common with!

The emotional fall-out from hooking up with your male BFF and having it not work out burns hotter than a thousand suns, and is more painful than a thousand awkward OkCupid dates.

BUT EITHER WAY, YOU AND YOUR MALE BFF WORK THROUGH IT

You have as many awkward brunches as it takes for you two to start being able to have fun again (and to begin to forget what the other one looked like naked). And eventually, everyone moves on. But even when nothing sexual has ever happened between you and your male BFF.

THAT IS, IF YOU WOULD EVEN CONSIDER MAKING OUT IN THE FIRST PLACE

BECAUSE, MOST LIKELY, THAT WOULD BE LIKE KISSING YOUR BROTHER

STILL, THEIR NEW SIGNIFICANT OTHER WILL BE SUSPICIOUS OF YOU AT FIRST

You may find yourself going to absurd lengths to show that you're not a sexual threat, like talking in her presence about your many interesting gastrointestinal issues, or making sure to wear your least-flattering, most coffee-stained clothes when all three of you go out together.

AND YOUR NEW BOO WILL WONDER ABOUT YOU TWO

You've wasted many a good hour explaining to your dude that you and your male BFF just spend time just hanging out and play Call of Duty —not heeding the call of each other's booty. Soon, they realize they have nothing to worry about.

BUT IT'S NOT EVEN REALLY THEIR FAULT

With the way the world insists that men and women can't ever be friends, your suspicious significant others are just reacting to what they've heard their entire lives. So you can't really be annoyed with them ... even though you really, really want to be.

AND WITH A LITTLE EFFORT, YOU CAN ALL END UP ONE BIG, HAPPY FAMILY

Okay, sometimes it feels like a LOT of effort. But this is your best friend we're talking about.

AND IF THEY CAN'T GET ALONG? WELL, THAT RELATIONSHIP WASN'T GOING TO WORK ANYWAY.

BECAUSE THIS GUY? SURE, HE HAS HIS QUIRKS

You didn't spend all these years helping each other through hard times and trash-talking each other while playing Super Mario Kart just to give up because the world doesn't get it.

BUT HE'S FOR KEEPS.

Whoever said men and women can't be friends clearly hasn't met us.