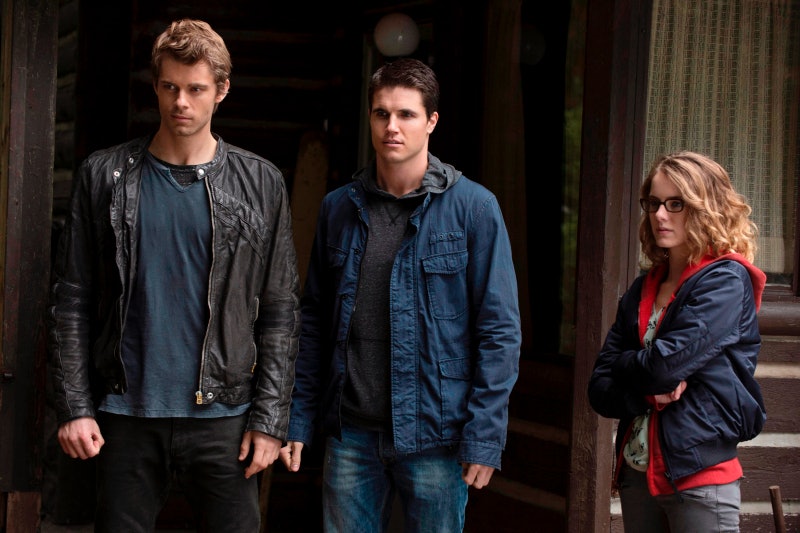 How many mistakes can the Tomorrow People make? Seriously, even with their powers, I feel like I'm watching the underdog in a Darwinian survival battle. The worst part is, I'm not even really rooting for them at this point. I need them to be smarter. I just do. In Wednesday's episode of The Tomorrow People , "Thanatos," Russell accidentally kidnaps Jedikiah while transporting, bringing him to the Tomorrow People's lair. And that's not even the dumbest move a Tomorrow Person makes this week. The situation that led to Russell's accidental kidnapping was even worse and totally on purpose. Russell and Cara break into Jed's house to do some psychic snooping while he's asleep. They are hovering over the man's bed in the middle of the night like the Edward Cullen to his Bella Swan and then are shocked when things turn out badly.

I'm trying to like The Tomorrow People. It's science fiction. It stars Arrow's little brother. I want it to be good. But so far, that's turning out to be a pipe dream. This week is a new low though. It's just mistake after mistake after… well, you get the idea. Here are the top five mistakes the TP make this week alone.

1. Deciding it would be a fab idea to break into Jedikiah's house in the middle of the offing night to read his mind.

He is their biggest enemy and works for a well-funded organization dedicated to their extinction, but it never occurs to them that he might have alarms and technology in place to neutralize their powers, which he does. Cara teleports away fast enough. Russell the Screw Up does not.

2. Keeping Jed in the lair once he's accidentally kidnapped.

Okay, I get that Russell was just trying to get away and it's not his fault that Jed hitched a ride on the back of his teleport like Marty McFly on a skateboard. But why (OH WHY) do they keep him there after? They knock him out, tie him up and proceed to question him, knowing full well that they can't read his mind when he's awake anyway. Only John can kill him and they have such a father-son kind of past that that seems unlikely. He hadn't seen much of the lair when Russell knocked him out — why not just teleport Jed to a field somewhere (or somewhere even more remote, like Antarctica) and leave him to find his way back to Ultra?

3. Letting him so much as see Cara.

Cara is supposed to be powerless, as far as Jed knows. He saw Stephen jab her with a syringe that he believed was full of the TP antidote. Sure, Cara covers by saying she's powerless, but it's the only place she feels at home. But still, even letting him see her was a bad call. They know they can't crack his mind anyway and it ends up exposing her secret and Stephen in the process. The only good that comes of this is that Stephen's days a double agent just have to be over now.

4. Putting Russell the Fuck Up in charge of guarding him.

This results in (surprise, surprise) a fuck up and Cara 100 percent revealing her TP powers to Jedikiah.

Ultra puts a APB out on Morgan, Jed's TP lover, and Stephen catches up to her. Instead of taking her in, he lies to Ultra in front of her and lets her go. I guess this is setting him and Jed up as allies in the future, but it also shows Jed that he has zero problems lying to Ultra, which he's been doing all the damn time since the pilot.

The rest of the plot was dedicated to more of John's backstory at Ultra and to Cara whining to John that she can tell Jed cares for him like a father cares for a son and being pissy that he's still keeping things from her. Maybe she and Stephen deserve each other.

My wish for next week: A Tomorrow People plot that is not predicated on every character doing the dumbest thing he or she could possibly do. Is that too much to ask?