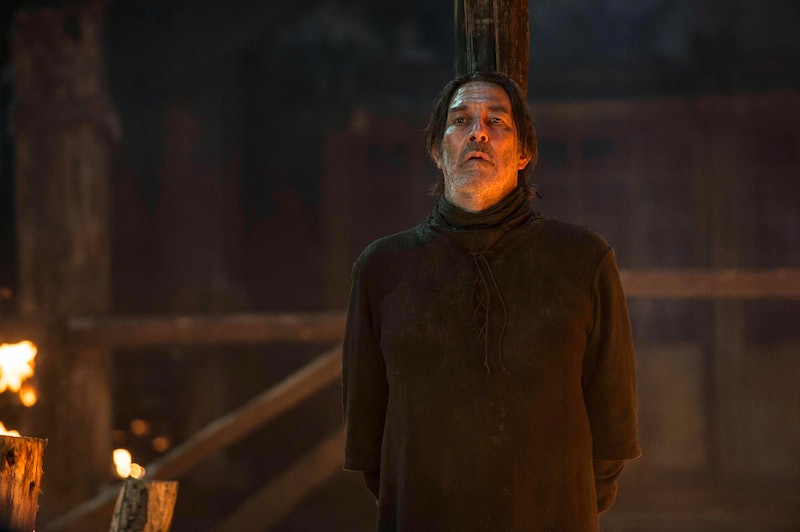 It is common knowledge that Game of Thrones has diverged from its source material in some major ways over the past five seasons. Most of the changes aren't a huge deal — but, in some cases, they're huge. For instance: There are a few very important book characters Game of Thrones fans may not realize are as significant as they are, either because their storylines were changed or they simply haven't shown up yet. In some cases, even, they just haven't shown their full potential yet. Whatever the case may be, though, book fans should know more than a few characters that have a major impact on the story.

Fair warning, even though the show has caught up with the books, there could be spoilers lurking in this post. Game of Thrones does occasionally scramble the timeline in such a way that story points that appear to have been skipped over can pop up later. If you get spoiled...well, it's not my fault, I don't know David Benioff and D.B. Weiss' life. Now that the disclaimer is out of the way, allow me to introduce you to a few characters — some familiar, some not so much — whose book arcs pushed the story forward in a major way.

Whether you've read the books or not, you have probably heard the outcry over the absence of Lady Stoneheart in the series. The reanimated corpse of Catelyn Stark is the stuff of nightmares in the books, though: After the Red Wedding, Lady Stoneheart is hellbent on getting vengeance against anyone who betrayed her family, and that includes their relations. Leaving her out of the show has altered both Brienne and Jaime's stories because Lady Stoneheart is supposed to capture Brienne, Pod, and their travelling companion Hyle Hunt, and then use Brienne to lure Jaime into a trap.

She is also notable for leading the Brotherhood Without Banners after Beric gave her the kiss of life. Who is part of that Brotherhood? Her daughter Arya's former companion Gendry. Without her dark justice being administered in the Riverlands, the show is missing out on a grim, but awesome twist in the story of the Starks. Even George R.R. Martin is disappointed Lady Stoneheart didn't make it to the screen. He told Entertainment Weekly, the character figures into both of the final two novels in the A Song of Ice and Fire series.

There is way, way more to Mance's story than what was seen on TV. First of all, he has an infant son who Jon swaps with Gilly's baby in the event that Melisandre decides to sacrifice a child. Then, there's the part where he was never burned alive because Melisandre used a glamour to save Mance. Because Jon has Mance's son as leverage, he sends Mance to infiltrate Winterfell to save the girl he believes to be Arya from being married to Ramsay. Mance disguises himself as a bard (a trick he first pulls off way back in the first book) and along with a group of wildling women reign terror down on the Boltons and their followers.

While Ramsay alleges that Mance is being held captive at Winterfell, there is no proof as of yet. Either way, the fact that his son is being raised by Gilly (unbeknownst to Mance) adds an extra wrinkle to the story that likely has book fans wondering what is ahead for the character. (Or, at the very least, what's ahead for the child he thinks is his son.)

The two younger brothers of Balon Greyjoy are, according to IB Times , rumored to appear in Game of Thrones Season 6. While both of Theon's uncles are certifiable, they have an important role to play in the final chapters of the story. They are important enough to warrant their own chapters namely because Euron (who cut out the tongues of the entire crew of his ship) wants to marry Dany. He sends a reluctant Victarion to retrieve Dany and bring her back to Westeros, and gives his brother a horn said to control dragons.

... what Euron fails to mention is blowing the horn is fatal.

Imagine, if you will, a young, female Oberyn — and you have Arianne. The daughter of Prince Doran, Arianne is the rightful heir to Dorne. In the show, Ellaria took on a fair amount of Arianne's personality, but Ellaria can never be involved in a scheme to take the throne of the Seven Kingdoms like Arianne could. Her journey to prove Dany isn't the last Targaryen is set to be a pivotal part of books six and seven.

In the books, it was Jon (also known as Griff), not Varys, who was Tyrion's travelling companion after he fled King's Landing. A skilled warrior and close friend of Rhaegar (Jon was in love with Rhaegar, and it is legit one of the most heartbreaking unrequited love stories in all of ASOIAF), Jon was exiled after Robert's Rebellion and has — get this — been raising Rhaegar's son in secret ever since. In A Dance with Dragons, Jon and his surrogate son Young Griff rode to Westeros and began taking back lands, setting themselves up to be major players. Also worth noting, Jon seriously wants to bring Varys down.

In the books, Arya's direwolf doesn't disappear into the woods never to be seen from again. She becomes a massive killing machine who leads a pack of wolves the likes of which Westeros has never seen before. Just like Bran, Arya possesses the ability to warg and through Nymeria's eyes she witness her companion feasting on men and she is responsible for pulling Catelyn from the river, which allows Beric to give her the kiss of life.

Nymeria's journey mirrors Arya's, and even though she isn't as important plot-wise as other characters on the list, she is hugely important in terms of Arya's journey. The direwolf remains Arya's truest link to family, and while warging she even encounters Ghost once.

Of all the characters on this list, I am most baffled by Coldhands omission. He is seemingly a white walker, but he is a kind, intelligent one. There is a possibility that he is something else entirely, but Coldhands is definitely dead. He helped Sam, Gilly, and her son escape from the wights and led Bran to the children of the forest. There are a ton of theories about who Coldhands is, and trying to solve the mystery surrounding him is one of my favorite parts of the books.

Patchface is Shireen's closest companion, and he is also absolutely terrifying. A jester who was the only survivor of the shipwreck that killed Stannis, Robert, and Renly's parents, Patchface washed up to shore three days later. He is completely mad, but within the nonsense he spews are prophecies. Also, he scares Melisandre. There's no way there's not something big coming for the character.

These are just a few of the characters whose importance has been overlooked by Game of Thrones. Even though most of these characters aren't onscreen, they still have their roles to play in the story... even if it's not the story the series is telling.

More like this
'The Summer I Turned Pretty' Book Ending Is An Emotional Rollercoaster
By K.W. Colyard
The Future Of 'All Creatures Great & Small' Is Confirmed & Wedding Bells Are Ringing
By Rebecca Fearn and Frances Stewart
A New Season Of The Midwich Cuckoos Could Be Coming “To A Town Near You”
By El Hunt
Everything To Know About Netflix’s '1899,' The New Mystery From 'Dark' Creators
By Radhika Menon
Get Even More From Bustle — Sign Up For The Newsletter