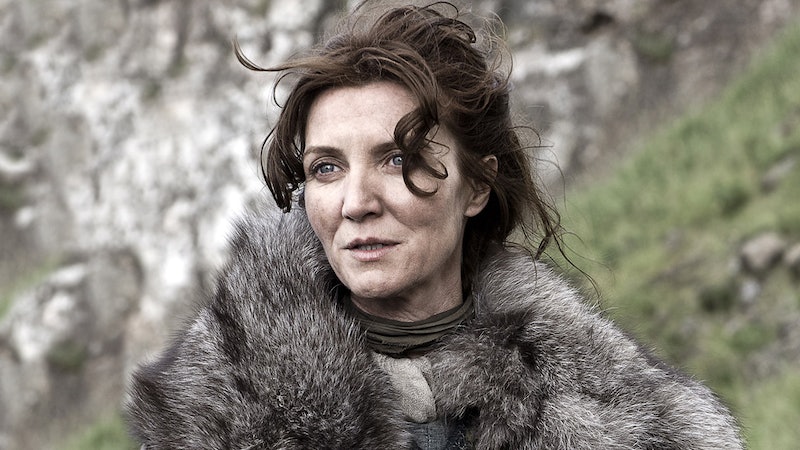 In adapting two books, 2,000+ pages, and something like 200 characters, it's understandable that Season 5 of Game Of Thrones had to cut out some material to streamline events into one 10-episode season. But, fans have sorely missed some of the Game of Thrones book characters that the show still needs to introduce. Now that showrunners David Benioff and D.B. Weiss have caught up to the end of George R.R. Martin's A Dance With Dragons — and consequently run out of books to adapt — perhaps it's time for them to spend a season focusing on some of the storylines that fell by the wayside this year.

Both Dragons and its precursor, A Feast For Crows, get a bad rap for their sprawling storytelling. After the War of the Five Kings has ended, the inhabitants of Westeros are left picking up the pieces and reassembling their lives. That means a lot of detours into the Riverlands, the Iron Islands, and Dorne, with subplots packed with unfamiliar faces and unfamiliar politics. Before Season 5 of Thrones aired, I never would have said that the Greyjoys' kingsmoot or the Martells' clashes over primogeniture would have been anyone's favorite. But, as soon as these subplots (and more) were cut, fans were in an uproar. While perhaps not as central to the saga as Jon Snow or Daenerys Targaryen, these locations added texture to Martin's fictional word and often featured compelling characters with unique perspectives on the struggles we've been witnessing for the past five years.

So, here are six un-adapted characters that Benioff and Weiss should seriously think about introducing in the upcoming Season 6.

It's not too late! This was undoubtedly the excision that hurt the most. The oldest child of Prince Doran is a willful young woman who, enraged by her father's reluctance to act following his brother Oberyn's death, hatches a plot to spur Dorne into action. She kidnaps Myrcella and intends to spirit her away and crown her as Queen of the Seven Kingdoms, since the Dornish recognize the right of the first child to rule, whether male or female... and Myrcella is older than her brother Tommen.

On the show, Arianne's part was given to Ellaria, Oberyn's grieving widow. This didn't work for several reasons. One is that it didn't make sense that Doran would allow a bastard paramour to talk to him the way his daughter does in the books. The second is that Ellaria's desire to simply murder Myrcella for revenge is much less compelling than Arianne's plan to make her a queen. And, finally, the change eliminates the the character's poignant backstory: Stung by the discovery of a letter in which Doran promised all of Dorne to Arianne's younger brother Quentyn (also cut out of the show), the princess is motivated just as much — if not more — by resentment for her father as she is by a thirst for vengeance. (The reveal that Doran had promised to Dorne to Quentyn only because he had already arranged a marriage between Arianne and Viserys Targaryen — designed to make Arianne the queen of all Westeros — comes as a punch in the gut to both Arianne and the reader.)

Benioff and Weiss' decision to cut such a strong, fascinating female character would have been acceptable if who they'd replaced her with was equally compelling. But, instead we got Ellaria's insane plot to murder an innocent young girl, along with three indistinguishable cardboard cutout Sand Snakes to boot. Benioff and Weiss should make this up to us by having Doran execute Ellaria in the Season 6 premiere, and then bringing Arianne out from wherever she's been hiding.

A large chunk of Dragons is devoted to acquainting readers with two significant new characters: originally introduced as "Griff" and "Young Griff," it's eventually revealed that these are actually Jon Connington, a banished Westerosi lord and best friend to the late Rhaegar Targaryen, and Rhaeger's own son, Aegon. Aegon was presumed dead, his head smashed in by the Mountain during the sack of King's Landing, but Varys tells Tyrion that he had the babe swapped out for a peasant boy and spirited the real Aegon away to safety. (Whether this is true, or whether "Young Griff" is really just an impostor being used to drum up support for the Targaryens, remains open for debate.)

Tyrion travels with the Griffs (who have disguised themselves with blue hair) through Essos for a while before being kidnapped by Jorah Mormont. (In the book it's Jon Connington, not Jorah, who becomes infected with greyscale.) They were headed for Meereen so Aegon could marry his aunt and invade Westeros with her — but once word reaches them that Daenerys has already wed Hizdahr Zo Loraq, they decide to change course and conquer the Seven Kingdoms on their own.

Though Benioff and Weiss (wisely) excised Tyrion's Griff-filled detour through Essos in favor of getting him to Meereen faster, there's still a chance that Aegon Targaryen could pop up next year to complicate Dany's claim to the Iron Throne.

Following the death of King Balon (an event which has yet to transpire on the show), all of the Ironborn gather on the island of Pyke to hold a kingsmoot and elect their next leader. Asha (Yara on the show), as Balon's sole surviving heir — Theon notwithstanding — stakes a claim. She's vying for the title against her own uncles, Victarion Greyjoy — the commander of the Iron Fleet — and Euron "Crow's Eye" — the outcast Greyjoy who has come home to claim his brother's crown.

While we don't need to see the whole long, drawn out kingsmoot, Euron is a fascinating character indeed. He captains a ship called Silence, manned entirely by slaves whose tongues he's ripped out. He was banished for seducing and raping his brother Victarion's wife. (Victarion subsequently "had" to kill her to defend his honor.) In his exile, he has sailed across Essos and to the shadowlands beyond Asshai, and returns home with a magic horn he claims will bind dragons to his will. After he wins the Seastone Chair over Victarion and Asha, he dispatches his brother to Meereen to find and bring back Daenerys Targaryen to be his bride.

Unlike the other characters on this list we already know that Euron is likely coming our way thanks to leaked casting calls for Season 6. But, who should portray the vicious pirate? It's been a popular idea among book readers for years that Danish actor Mads Mikkelsen should play Crow's Eye. With NBC's Hannibal now cancelled, the one silver lining will be that Mikkelsen will actually be free to play the part. Are you taking heed, casting directors?

To be fair, Harrold Hardyng hasn't been cut out of the show... yet. He won't be formally introduced until the upcoming sixth book, The Winds Of Winter, although readers were offered a glimpse of him in a released preview chapter from Sansa's point-of-view. But, given how drastically Sansa's storyline departed from her book counterpart's in Season 5, it's highly likely that Harrold will end up on the cutting room floor next year... which is a shame.

Sansa's storyline in the books, which finds her still holed up safely in the Vale of Arryn, may not be as action-packed as her fabricated marriage to Ramsay Bolton, but it puts the character in a much more powerful position. Whereas Season 5 disappointingly saw Sansa fall back into her standard "victim" position. In the books, Martin has set the character up to be a key player through her engagement to Harrold Hardyng... better known as Harry The Heir. Thanks to a long story about lineage and untimely deaths, this distant relative to the Arryns is actually next in line to young Robert (Robin on the show) as Lord of the Eyrie.

In the books, Littlefinger's plan is to marry Sansa to Harry, wait for sickly Lord Robert to die (or, perhaps hasten his death?) and then use the formidable might of the famed Knights of the Vale to help Sansa retake Winterfell and the North. Perhaps now that Sansa has escaped Winterfell, Benioff and Weiss can get her back on track with her book storyline. Maybe Sansa will meet up with Brienne in the woods outside the castle, and Brienne will offer to escort her back to the safety of the Vale... where Sansa meets a young, handsome squire named Harrold.

Although Benioff and Weiss dropped a small hint this season — Sansa's old chambermaid who whispered to her, "The North remembers" — the show has been light on retribution for the Starks who were slaughtered in the traumatic Red Wedding way back in Season 3. As far as we know, the Freys are still being all creepy over in the Twins and obviously Roose and Ramsay are still being all creepy in Winterfell. In the books, there's more of an undercurrent of resentment and rebellion among the northmen who are chafing under the rule of the traitorous Boltons. (This is detailed at great length in a popular fan theory called "The Great Northern Conspiracy.")

There's perhaps no better symbol of this quiet rebellion than Wyman Manderly, the Lord of White Harbor. Roose Bolton had dispatched three Freys to Manderly's court to ensure the northman's fealty. But, when Roose summons them all to Winterfell to attend the wedding of his bastard, the three Freys are nowhere to be seen. Wyman claims they simply got lost on the way from White Harbor to Winterfell. He then serves his host three giant, steaming meat pies. *omnomnom*

Like Jorah said back in Season 1, a wedding without at least three deaths is a dull affair!

Yeah, I won't be letting this one go anytime soon. Fool me once, shame on you, Benioff and Weiss. Fool me THREE TIMES and I'm gonna need you to apologize by finally giving me my zombie Catelyn, OK?

More like this
Emilia Clarke Shares More Details About The New 'Game Of Thrones' Series
By Maxine Harrison
Twitter’s Reaction To HBO’s ‘Game Of Thrones’ Jon Snow Spinoff Idea Is Chaotic
By Stephanie Topacio Long
Who Could Die In The Stranger Things Season 4 Finale?
By Kadin Burnett
At 14, Jenny Han Wrote Rom-Coms About Her Friends & Fan Mail To Leo DiCaprio
By Alyssa Lapid
Get Even More From Bustle — Sign Up For The Newsletter