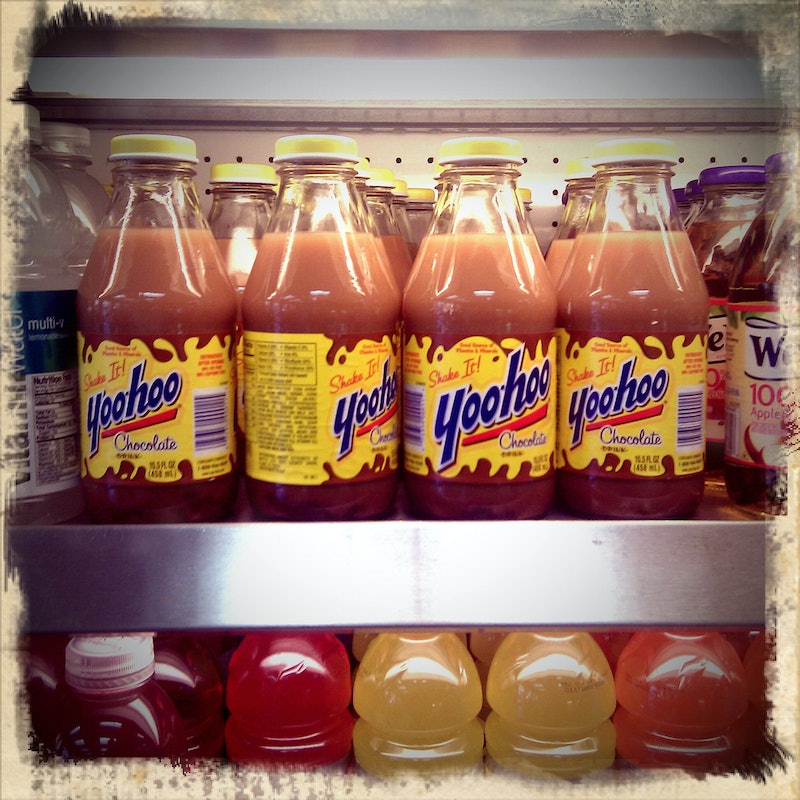 If you brought a bagged lunch to school, there were always a couple of things you could expect, without fail, to find inside: A sandwich, a piece of fruit, a cookie or some Fruit by the Foot if you were lucky... and, of course, a drink. Arguably the beverage was the most important part of the whole deal, because where else in your lunchtime choices could you let your personality shine through? Each of these distinctive drinks from the '90s could be found in very specific types of lunch boxes: Capri Sun and Sunny Delite in those belonging to the kids who wanted to be skaters; Boku in the ones who liked to boast about how grown up they were; Squeezits in the ones who were known for being slightly off the wall; and so on. Nothing revealed the kind of person you were quite like your juice box did.

So, in honor of Throwback Thursday, I've assembled 14 memorable beverages we always hoped we'd find in our lunchboxes back in the '90s. Although a few of them have since been discontinued (RIP, Orbitz), a number of them are — to my surprise, I must confess — still around. I don't know about you, but I kind of like the idea of passing down our favorite childhood memories to subsequent generations — even memories as goofy as the drinks that used to turn our tongues funny color at lunchtime.

Fruit-flavored soft drinks in squeezable plastic bottles were huge in the 1990s, and Squeezits were the best of the bunch. Their success wasn't necessarily due to how they tasted, though; the big thing they had going was the fact that each bottle was shaped like a cartoon character. Squeezits actually date back to the late '80s; unfortunately, though, they were retired in 2001, and General Mills has no plans to bring them back. We'll just have to hold onto our fond memories of them as tightly as we can.

I don't know about you, but I had the hardest dang time drinking Capri Sun when I was a kid. Whenever I tried to stick the straw in the pouch's intended location, I always managed to jab it right through to the other side instead. But despite this issue, they're still incredibly popular today — and perhaps even more impressively, they've actually been around for 46 years. Capri Sun was first introduced in Germany under the name Capri Sonne in 1969.

The only Hi-C I was ever allowed to have as a kid was the much-sought-after Ecto Cooler. Why? I have no idea. But it really didn't matter, because nothing matters more than having Slimer on your jucie box. Like Capri Sun, Hi-C has a long and storied history; it was created in 1946, tested in 1947, and finally marketed for the first time in 1948 (or at least, that's what numerous Internet sources paraphrasing a 1988 interview with George Roberts, Hi-C's longtime Sales Manager, tell me). Originally it only came in one flavor: Orange.

First introduced in 1990, Boku was intended to make juice boxes acceptable for adults. It came in cartons without a straw (because apparently straws are juvenile. Or something), and in flavors like White Grape Raspberry. Apparently It existed until the early 2000s, although I don't think I ever spotted any adults drinking it during that time. The commercials, though? That's what made these suckers special. Richard Lewis, man. Richard Lewis.

We've discussed Clearly Canadian a few times before, but it's still worth bringing up. Not quite straight sparkling water and not quite soda, this clear, fruit-flavored, sparkling beverage classed up lunchtime like nothing else. And hey, guess what? A campaign to bring back its mid-'90s iteration has been remarkably successful! Order yourself a case at the official Clearly Canadian website. Go for the Mountain Blackberry. It was always the best flavor.

Although Kool-Aid initially made its name with the powdered drink mixes we all knew and love (mostly because they made us feel like mad scientists while we mixed them up), it hopped on the squeezable bottle train with Kool-Aid Bursts sometime in the '90s. Fun fact: Kool-Aid itself dates back to the early 20th century. It existed under a variety of names until 1927, at which point it was dubbed first Kool-Ade, then later Kool-Aid. Bursts are still available, by the way, so go nab yourself some Berry Blue dreaminess if you want to relive your childhood.

Confession: When it came to chocolate milk-type lunch box drinks, I actually preferred Hershey's variety. But Yoo-hoo was undoubtedly the hippest of all the options, so it reigned supreme in the cafeteria. Like so many of the other beverages on this list, Yoo-hoo's chocolatey goodness actually stretches back quite a long way: Its very first iteration came in the 1920s courtesy of a New Jersey grocer named Natale Olivieri.

Juicy Juice was usually reserved for the younger crowds, with its smaller boxes being sized perfectly for tiny hands. It also made a big deal about the fact that it was 100 percent juice, rather than fruit-flavored soft drinks that were so prevalent at the time. My favorite was always the Kiwi Strawberry, although I have a soft spot for the Apple one, too (a throwback to my apple juice-only years). It's still alive and kicking, too!

I actually remember Hawaiian Punch BubbleYum and the Hawaiian Punch board game more than I remember Hawaiian Punch itself — but what I do remember was how magnificently it stained our mouths after we drank it. The beverage saw its beginnings in 1934 in a converted garage in Fullerton, California; A.W. Leo, Tom Yates, and Ralph Harrison were trying to develop a new flavor of syrup to add to their line of ice cream toppings, the Pacific Citrus Products company. It turned out that the stuff also tasted fantastic when mixed with water, and, well… you know the rest.

Surprisingly, Mondo does not have a history spanning decades before its popularity in the '90s: It first hit shelves in 1991. Like Squeezits and Kool-Aid Bursts, it capitalized on the fact that kids really love to squeeze things. It's still around today—but nothing beats the 1993 Mondo commercial. It's so '90s.

I was never a Sunny Delite fan, but that's probably because I just wasn't big on orange juice in general. Founded in 1963 by two Florida dads, its bright and cheerful color pegged it as a drink for bright and cheerful kids. These days it's known more by what was initially a nickname — SunnyD — but which was apparently been deemed much cooler than “Sunny Delight.” The company that makes it still bears the original name, though.

A slightly later addition to the pantheon of awesome lunch box drinks, Fruitopia arrived in 1994 amidst the success of other fruit drinks like Snapple. The commercials were super trippy and weird; I mean, just take a look at that thing. Unusual, no? Granted, it was aimed at a slightly older set — teens, as opposed to elementary school kids — but still. Wacky, wacky stuff. It largely vaniashed after the early 2000s, although apparently a few of its flavors have been folded into Minute Maid's lineup.

Ah, Orbitz! Much loved and too quickly gone, this space-age drink produced by Clearly Canadian won us all over with its wacky little suspended bubble things. Maybe Orbitz is responsible for my love of bubble tea as an adult. Who knows? Anyway, it was only available for a brief while around 1997 — but its legend remains, a tribute to those who loved it and lost it.

Should I have been drinking caffeinated iced tea as a child? Probably not; then again, I didn't really catch onto the Arizona craze until middle school, which was about the same time I started drinking coffee, sooooo… yeah. Anyway, Arizona's very first offering — iced green tea — arrived in 1992; the rest quickly followed, and boom. Iced tea for all. Although the drinks were known for their tall cans and wacky bottles, they also came in boxes; we used to get them in bulk from Costco.

According to its website (warning: loud, autoplay music through the link), the company actually has no connection to the state of Arizona. The owners, John Ferolito and Don Vultaggio, apparently “looked at a map to see where it was hot” when they were trying to name their tea. They almost went with Santa Fe, but ended up going with Arizona instead.

More like this
The 5 Best Electric Lunch Boxes For Hot Meals On The Go
By Vanessa Spilios
Netflix Reveals First Look At Wednesday In The 'Addams Family' Spinoff Series
By Bustle Editors
Kenan & Kel Just Reunited At The 2022 Emmys & Twitter Is Overjoyed
By Grace Wehniainen
15 Offensive AF Jokes In 'Friends' That Really Aren't OK
By Tolly Wright, Bustle Editors and Meguire Hennes
Get Even More From Bustle — Sign Up For The Newsletter