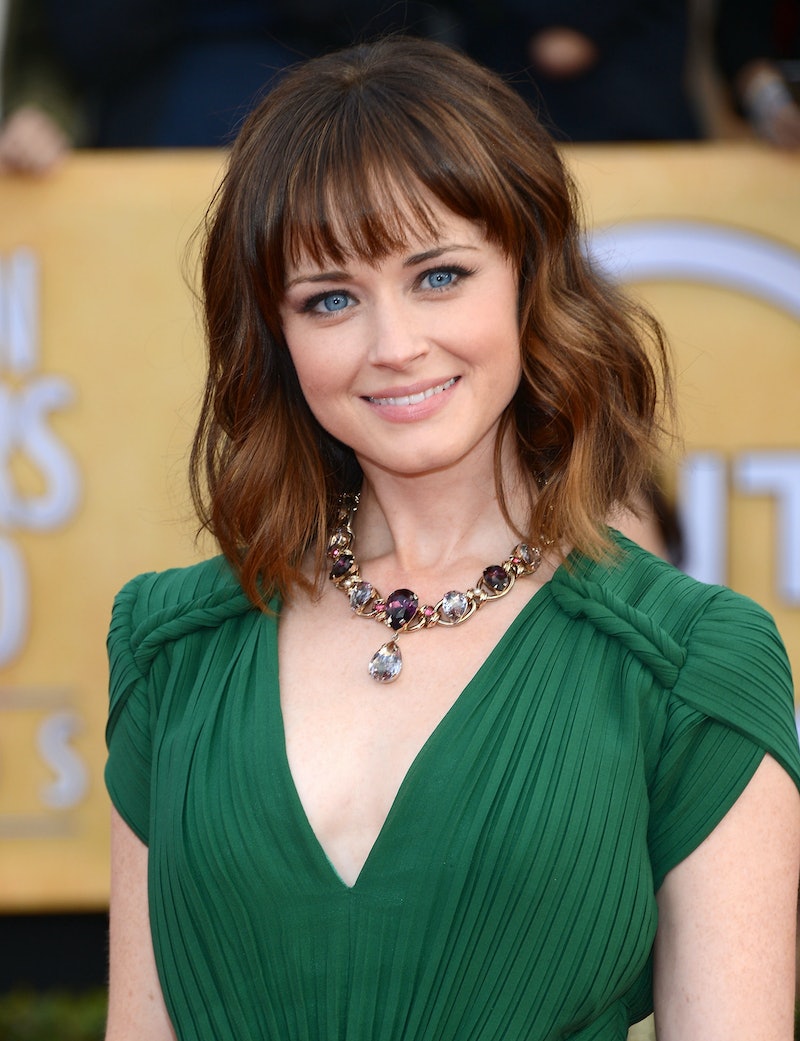 There's good timing, and then there's really good timing. Such is the case for Jenny's Wedding , a new film from writer/director Mary Agnes Donoghue (Beaches) about a lesbian's impending marriage, which debuted on July 31, just one month after the Supreme Court's decision to legalize gay marriage nationwide. Starring Katherine Heigl as the titular Jenny, the movie deals with many of relevant issues of recent months: LGBT rights, cultural acceptance, the support of a loving partner (played by Alexis Bledel) when facing an uphill battle. Simply put, Jenny's couldn't have come at a better time.

"People are so excited to just see a film being made on this subject matter," says Bledel, speaking with Bustle. "[And to see] conversations that are authentic... something that they recognize and could relate to."

In the film, Bledel plays Kitty, the patient and understanding partner of Heigl's Jenny. At times, it's an unforgiving role — the movie is far more focused on Jenny's relationship with her disapproving family than her romance with Kitty — but Bledel says she jumped at the chance to take on the part.

"When I read the script. I was like, sign me up!" she says. "I was really excited about it. I had never read anything like it."

Bledel credits Donoghue's passion for the project as a main reason for her interest. Donoghue based the script on events surrounding her niece, a gay woman (also named Jenny) who came out to her family and told them she wanted to get married.

"It was a story that was close to Mary Agnes’ heart," Bledel says, adding that the movie was like the director's "baby." "It was personal for her."

Bledel and Heigl got to meet the real Jenny and her partner, which the actress says was a major help in taking on the role — but also a cause of some stress.

"You always feel a little bit of pressure when it’s based on a real person, to stay true to their vision," she says. "I just wanted it to be authentic for Mary Agnes."

Jenny's Wedding will certainly ring true for anyone who's faced criticism from their families for expressing themselves. In the film, Jenny's parents are shocked to learn that their daughter is a lesbian, and react with fear and anger, rather than acceptance. Her siblings are quicker to come around, but for everyone, the discovery of Jenny's sexuality— and her decision to get married — ignites major emotions.

"When I saw the film, it really got me. I can't even think about it," Bledel says, pointing to the conversations had between Jenny and her family as "the most heart-wrenching."

Although Kitty stays on the sidelines for much of the movie's controversy, she's not immune from drama. Bledel says she imagined a backstory for the character that includes a loving, supportive family, but also a relationship with Jenny that features a good amount of "tough love."

"Dealing with Jenny’s family requires a lot of understanding from her," Bledel says of Kitty. "She can’t hold her hand through all of it... as much as she’d like to be there for her, she kind of feels like Jenny just has to take certain steps on her own to be able to feel it out and make the change that she wants to make."

Although Jenny and Kitty's five-year-long relationship is only explored in a handful of scenes, the viewer can sense how strong the couple's bond is, and how much it's withstood. This is due in large part to the performances of Bledel and Heigl, who imbue their characters with realistic honesty and depth. Although the actresses didn't spend much time together (Bledel says filming was "rapid," shot in just 20 days), they came to a quick understanding of Jenny and Kitty's love for and commitment towards each other.

"It’s really about family," she says. "They want to be able to start a life together."

Bledel hopes that the movie can be a conversation piece for other families, especially considering the movie's relevance in today's fight for LGBT equality. It's already having an impact; the actress recalls one scene in particular that affected her "on an emotional level," and then later, at a screening, seeing a woman next to her burst into tears watching the same scene.

"[Donoguhe] just knows how to pick the right words and the right moments," Bledel says, adding that as an actor, the goal of making a movie like this is "to do something unique but real."

Which the honest, emotional Jenny's Wedding surely is. Watch the trailer for the movie, available in select theaters and VOD now, below: