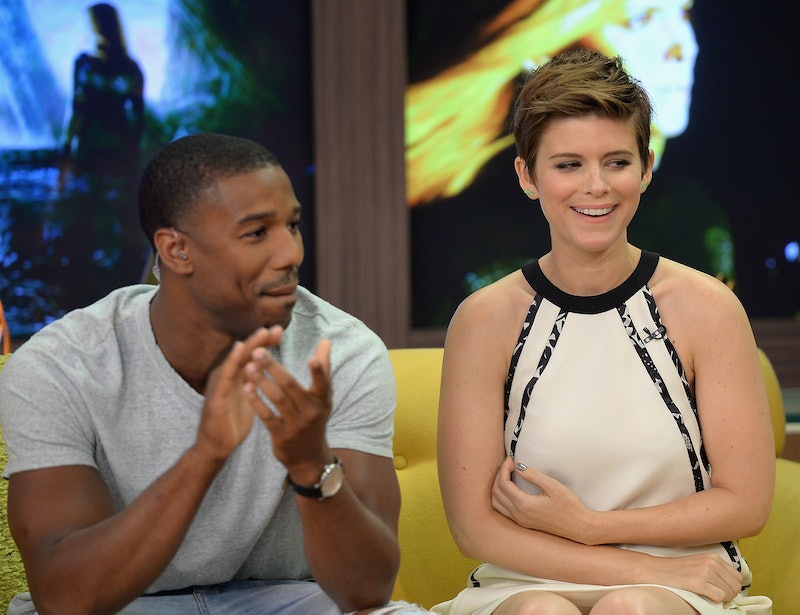 The new Fantastic Four movie hasn't even hit theaters yet, but the film has already been taking shots from critics over its depiction of the classic superhero team. Some fans believe the actors in the movie are too young. Others are critical of the heroes' origin in the movie forgoing the space travel storyline in favor of a trip to another dimension. Some fans are even angry about the logistics of how Mr. Fantastic's powers are going to work (he stretches — does it really matter how?). But without question, the decision to make a black Human Torch, aka Johnny Storm (played by Michael B. Jordan) in the reboot, has been the most frequent criticism leveled at the film — and also the dumbest.

What a lot of people can't seem to get over is that Johnny Storm and Sue Storm are brother and sister in the movie, but are played by actors of two different races (Kate Mara portrays Sue). There are obviously a number of ways in which such an event could be possible in the real world (adoption, biracial parents, etc.), and all of them are way more realistic than a man spontaneously bursting into flames and flying, yet people seem to be focusing solely on this. Some people just don't like the idea of a black Johnny Storm, and some of the critics are defending their racism by declaring that since a black Johnny Storm doesn't exist in the comics, he therefore shouldn't exist in the film.

Well, guess what? I hate to break it to you, but if your argument is that you're against Johnny being black because it means the movie is changed from the comics, you're flat-out wrong. Even with a non-white character, the movie is still a much more faithful adaptation of the classic Fantastic Four lineup than many of the "traditional" comics. The movie features Mr. Fantastic, the Invisible Woman, the Human Torch, and the Thing; in other words, your classic Fantastic Four. In the comics, though, that's not always how the line-up looks — just look at these 14 characters, below, who in the original text, make big changes to the "core four." If you ask me, the movie's about as "traditional" as you can get.

The Marvel Cinematic Universe's newest hero, Scott Lang, won't be showing up in any Fantastic Four movies since his rights belong to Marvel and not Fox, but he has served as a member of the team in the comics.

Yep, Marvel's top dog himself had a spot on the team after his BFF the Human Torch died (he came back, don't worry). The team changed their name to the Future Foundation and switched their uniforms from blue to white during this time, but it was still the FF.

What's this? A black member of the Fantastic Four? Alert the presses! Luke Cage served on the team briefly while the Thing was without his powers, so take that, racists!

Another black Fantastic Four member?! Now I'm really making the Michael B. Jordan haters uncomfortable. Not only was T'Challa a member of the team after the Civil War comic event, but he also replaced Reed Richards as leader of the team.

Maybe the next movie should just feature an all-black team to get back at the haters? Storm took a break from the X-Men and joined her then-husband Black Panther on the FF for a short while. Interestingly enough, Storm is one of the few characters on this list for whom Fox owns the rights, meaning she could technically appear in a Fantastic Four movie.

The prehensile hair-wielding Queen of the Inhumans has served as a member of the FF in more than one incarnation of the team.

Sister to Medusa, the element-controlling Inhuman Crystal has also had numerous lengthy runs on the team. She also dated Johnny Storm for a time, which will be a recurring theme on this list.

Despite the silly name, She-Hulk is one of Marvel's best depictions of a female hero. The cousin of Bruce Banner, Jennifer Walters received her powers through a blood transfusion from her cuz, but she's not out of control like the Hulk. She's spent a lot of time as a member of both the FF and the Avengers.

There's a She-Hulk, why not a She-Thing? Sharon Ventura actually first joined the team as a new Ms. Marvel, then gained similar powers to the Thing. She also served as the Thing's love interest. Who says opposites attract?

OK, she was actually just called Human Torch while on the team, but why break with tradition? Frankie Raye basically had the same powers as Johnny Storm (whom she also dated) and was such a well-liked member of the team they almost changed their name to the Fantastic Five. No joke.

Thankfully not called She-Namor, Namorita is the cousin of the FF's frenemy Namor the Sub-Mariner. She's an Atlantean who, get this, dated Johnny Storm for a bit.

Another female version of the Thing (and another ex-girlfriend of Johnny Storm's) Ms Thing can be seen above in a version of the team alongside Ant-Man, Medusa, and She-Hulk. How do you like them apples, "Johnny Storm can't be black because that's not my Fantastic Four" proclaimers?

Sue and Reed Richards' kids still haven't grown up in over 40 years of existence, but they're still basically members of the team. Franklin also might be the most-powerful character in the Marvel Universe, too, so there's that.

I'm a longtime fan of the comics, and I've never even heard of this guy. Apparently Dennis Sykes had matter manipulating powers but also had cancer that killed him within a month of his first appearance. But in that short amount of time, he was still able to gain membership to the Fantastic Four. Seems like they'll let in just about anybody. No word on whether or not Sykes dated Johnny Storm.