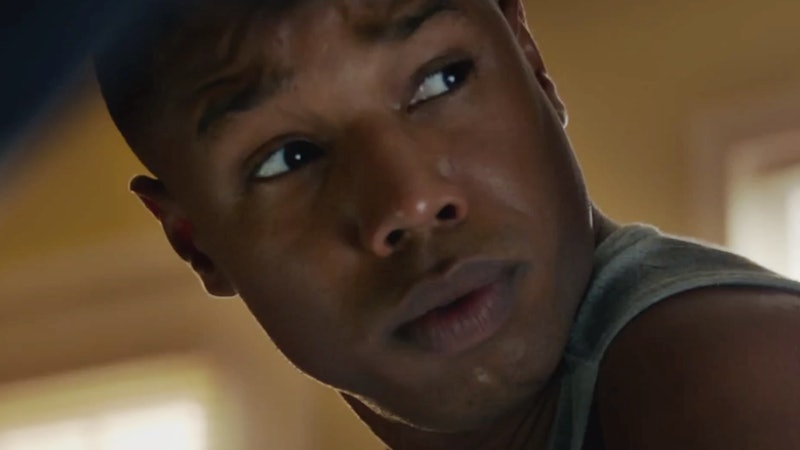 The Fantastic Four reboot is one of the most exciting movies of the summer, thanks to it's young, hot, charismatic cast. Michael B. Jordan co-stars as The Human Torch, the role previously played by Captain America Chris Evans, which is an exciting step for diversity in Hollywood and superhero movies in particular. On Tuesday, the final Fantastic Four trailer was released, and it shows a glimpse into the childhood of Reed Richards/Mr. Fantastic, who is played by Miles Teller. A precocious kid, experimenting with teleportation and a flying car in his bedroom, it is clear that he was destined for greatness.

The film comes out August 7th, but, despite the appearance of Doctor Doom in this trailer, he's not the main antagonist in this film. Crazy, I know! But, according to Michael B. Jordan, the movie isn't even about the villains or the battle between good versus evil — it is about the relationship between the superhero team.

"This is a family movie about four friends — two of whom are myself and Kate Mara as my adopted sister — who are brought together by a series of unfortunate events to create unity and a team," Jordan wrote in Entertainment Weekly, "That’s the message of the movie, if people can just allow themselves to see it."

We are psyched to see Michael B. Jordan in action. Check out the full trailer and the 11 best moments.

"Is it next to your flying car?" the teacher asks about Reed's teleportation machine. Rude move, teacher, to make fun of him like this, and in front of the whole class. We hope this is what inspires Reed Richards to become Fantastic, kind of like how Kate's sister Rooney Mara dumped Mark Zuckerberg and motivated him to create Facebook.

2. The Neighborhood's Lights Go Out

This shows he's onto something, guys!

An adorable, funny moment, but also an important insight into Reed's character. He prides himself on his work, and doesn't care what people think.

4. Seeing Miles All Stretched Out

5. Michael B. Jordan is Hotter Than Ever

Yup, that's Michael B. Jordan as The Human Torch, and he is SCORCHING.

Much better than the way she disappeared from House of Cards, amirite?

He's super adorable AND committed to using his powers wisely.

8. The Thing Punches The Crap Out of Everything

Definitely the most bizarre member of the team, and we're excited to see what the reboot does with him.

Yes to you, MBJ. ALWAYS.

11. The Human Torch in Space

Is this an intergalactic battle? How does this set up future films in the franchise? We'll find out in August!