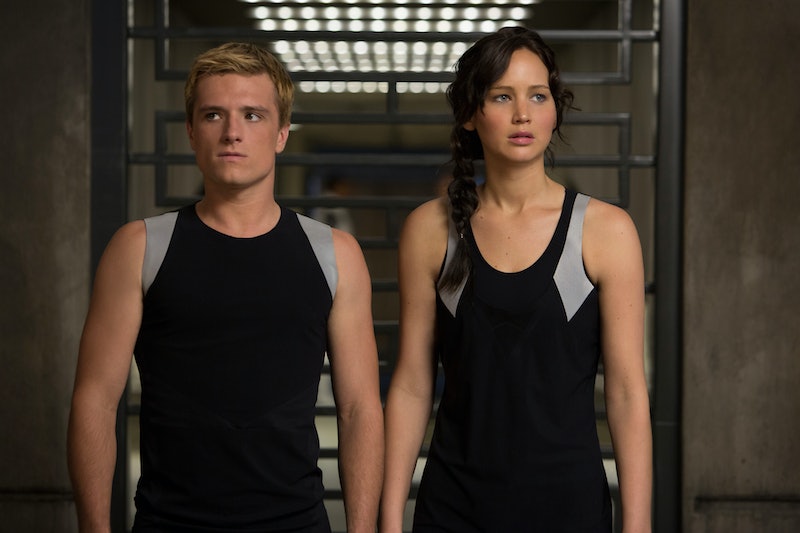 Almost all Hunger Games fans have agreed that the Catching Fire movie was amazing. The adaptation from book to film was pretty faithful, director Francis Lawrence has been highly praised, Jennifer Lawrence's acting was incredible and all of the new characters were cast perfectly. But there has been important piece of the film that has been relentlessly mocked ever since the premiere — Peeta.

Lists, articles and gifs have all been dedicated to making fun of Peeta for supposedly messing things up in Catching Fire. Putting any perceived love triangle aside, Peeta doesn't deserve all of this hate. He more than does his part in both games and the ensuing revolution, especially in the books.

The hate must be stemming from people who were hypnotized by Liam Hemsworth's face. Yes he, and therefore Gale, is very attractive, but more than looks matter here. And I'm sorry, have the critics not seen Josh Hutcherson? Don't be blinded by the height thing, that jaw can cut glass.

Once the Mockingjay films are released, I have a feeling a lot of these haters are going to quietly fade away. Both Gale and Peeta go through a lot in the final book, good and bad, and it'll be hard to criticize Peeta for anything going forward.

But until then, let's look back at Catching Fire to prove that Team Peeta is who we should all be rooting for.

Okay, this was in the original Hunger Games, but it's so important it needs to be mentioned. Had Peeta not given Katniss that bread, she and Prim could've starved to death. Then when Katniss went to thank him, she saw the dandelion that reminded her of her father's lessons on edible plants. Without this key early moment between Katniss and Peeta, there might never have been a girl on fire.

The entire premise of the first third of the movie is centered on Katniss and Peeta pretending to be in love, so that the revolution will weaken and President Snow won't kill them and/or everyone they know. That's not a problem for Peeta because he actually does love Katniss. So he gets to have his heart re-broken every day, as the girl he's loved for most of his life only pretends to love him when people are looking.

Oh and the whole marriage thing? The movie skipped one kind of important line. After Katniss first suggests that she and Peeta get married, he gets upset and leaves the room. Katniss then asks Haymitch what his problem is, because she thought this is what he wanted. Haymitch responds, "He wanted it to be real."

He Tries to Do the Right Thing

When Katniss and Peeta visit District 11 on the victory tour, she says a few words about Rue and Thresh to their families, without going so far as to upset President Snow. Peeta then pledges to give one month of his and Katniss's prize to the families every year, and his words spur a tribute that turns violent. Seems like Peeta messed up right? Except that Katniss didn't tell him about President Snow's threats, so he had no idea he was supposed to quelling a revolution, and instead accidentally instigated one.

Katniss and Peeta both get awful nightmares after their first Hunger Games. One night when Peeta checks on Katniss after hearing her scream, she asks him to stay. They spend the rest of the Victory Tour sleeping together, platonically, every night, because being with Peeta helps Katniss with her nightmares. Do you see the kind of torture this poor kid was going through?

The love triangle stuff definitely gets overblown for The Hunger Games, but it is clear that both Peeta and Gale love Katniss, and she has feelings for both. Still, when Gale is being whipped, Peeta steps in to help Katniss stand up to the peacekeeper responsible. Later when Gale is recovering in Katniss's house, he even goes to help take care of him, because he's a good guy.

When Katniss finds out that the Quarter Quell will be reaping tributes from the existing pool of victors, she know's that she will be representing District 12 alongside either Haymitch or Peeta. She begs Haymitch to volunteer for Peeta, but when the reverse opposites, she makes him promise to keep Peeta alive, even at her own expense. In the book, her reasoning is more clearly explained. First, she does actually care for Peeta and wants to see him survive and go on to live his life. Second, she believes that for the revolution to succeed, they need Peeta. She is not cut out for life as a public figure, but knows that Peeta has the ability to unite and lead people in hard times.

He Stands Up to the Capitol

Before Katniss hung a DIY version of Seneca Crane, Peeta went into a room filled with people from the Capitol and painted Rue. Instead of showing them his skills like he was supposed to, he defies them by reminding them of one of their many innocent victims. Sure, Katniss's act may have been flashier, but his was beautiful and courageous.

Peeta does fall a few times throughout Catching Fire and can have some trouble keeping up here and there. This all did happen in the book, except with a perfectly valid explanation — he has a fake leg. At the end of The Hunger Games when he and Katniss are on top of the cornucopia fighting off Cato, he gives Peeta a serious gash in his leg. By the time they make it out of the arena, Peeta has lost a lot of blood and needs to have his leg amputated. So, whenever he stumbles or slows down in Catching Fire, it's originally because he was trying to traverse a jungle with a fake leg that he'd barely gotten used to. Pretty understandable.

After giving Katniss a locket that includes photos of her mother, sister, and Gale, Peeta tells Katniss that he wants her to make it out of the arena, because she has other people to live for. He sincerely believes that no one else cares about or needs him, and it's so, so sad. Sad enough to get Katniss to express some genuine emotion for him, which leads to...

Seriously. It was amazing. Katniss doesn't have time to worry about her romantic life, but it's clear that she harbors some real feelings for Peeta. Peeniss forever.

I won't get into what happens in the final book, but here's a nice little hint that should make any Peeta fan cringe.

More like this
'Bridgerton' S3 Teases Exciting Social Season For Penelope Featherington
By Bustle
Letitia Wright's Aisha Encourages A Vital Conversation Around Immigration
By Maxine Harrison
You Definitely Know The Voice Of Shuri's AI In 'Black Panther: Wakanda Forever'
By Brad Witter
This James Bond Event At Abbey Road Studios Was A 007 Fan's Dream
By Samantha Rollins
Get Even More From Bustle — Sign Up For The Newsletter