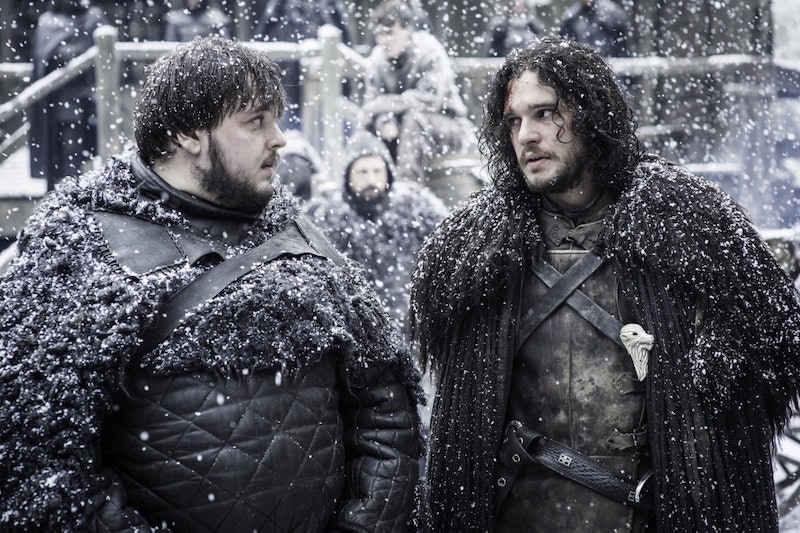 It's been a long and painful road for Game of Thrones fans since the Season 5 finale "Mother's Mercy" aired on June 15. The series' most beloved character Jon Snow was brutally murdered by a vengeful band of former brothers, the men of the Night's Watch. Even though blood poured out of his body, his eyes were cold and devoid of live, fans still believe Jon Snow would return. Even though Jon Snow himself, Kit Harington and HBO executives have confirmed that Jon Snow is super duper dead, we are still holding onto the hope that Jon Snow may rise again as a direwolf or Azor Ahai. But dear Winterfellians, even Samwell Tarly knows Jon Snow is gone.

John Bradley, the actor who plays Snow's best friend and closest confidant Samwell Tarly recently spoke at Comic-Con about filming his last scene with Kit Harington and it ONCE AGAIN confirmed that Jon Snow really is dead. His sentiment will make you less pissed off at the "For the Watch" coupe and more sad about the loss of such a forthright character. Bradley reminisced to People's Choice, “It was sad for me even though I knew what was coming. In fact, it was kind of more sad because everything leading up to it has an extra degree of poignancy if you know what’s going to happen... Jon and Sam’s last scene together and Kit and my last scene together had a certain texture to it, which [our scenes have] never had in their goodbyes before — it felt final.”

In the scene, Sam asks Jon to allow him to escort his love Gilly to safety and cheekily admits to Jon that he finally "did the deed." They share a sweet, "OMG YOU DIDN'T" smile with one another and for an instant, and we get to enjoy Jon and Sam just being friends. Sam leaves camp with Gilly and her baby in tow and he doesn't witness the slaying of his dearest friend and brother. Watching that scene again with the knowledge that there was already so much loss and sadness built in not just for the characters — but for the actors, too — breaks my heart even more.

Now we will have to suffer through watching Sam discover that Jon Snow has been slain. He will probably blame himself, and then hopefully seek revenge and become the warrior Jon Snow has always known him to be. Now if you'll excuse me I need to have a cry.