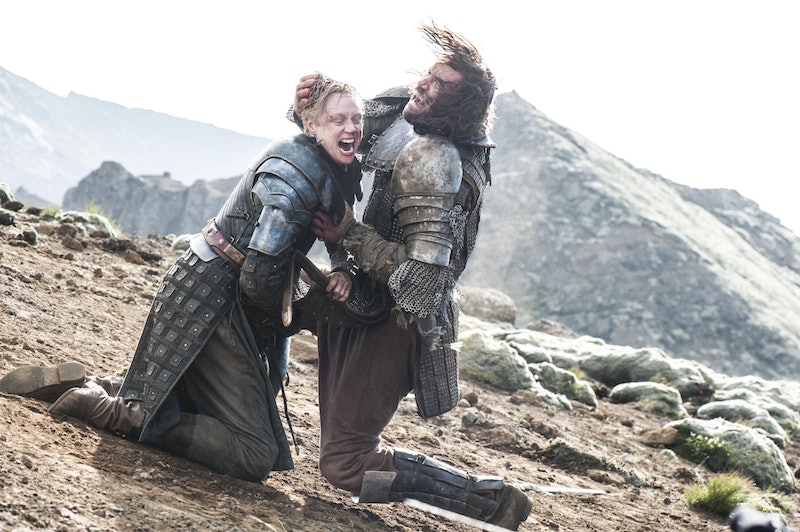 There's nothing more satisfying than obsessive Game of Thrones theorizing. And, who can blame us when the season finales routinely leave fans hanging off progressively larger cliffs each year? I mean, take the whole Jon Snow deal — poor Kit Harington's going to have people stalking him and his as-of-yet unshorn hair for months on end to prove their theory that Jon Snow coming back. At any rate, if you're going through a touch of Game of Thrones withdrawal you can find theories all over the Internet — but the Game of Thrones book forums have extra insane theories going on. After all, many of the book fans have several years' head start on the show fans (so you've got Jon Snow resurrection theories dating all the way back to 2011.)

As a relative forum n00b, I was lucky enough to stumble upon this crazy-thorough theory masterpost — it references everything from the ultra-ubiquitous (and let's be honest, practically canon) R + L = J theory, to more obscure theories expounding on the machinations behind the Purple Wedding. At any rate, here are some of the coolest theories from the list — because with nine months to go until we find out if Jon Snow is really dead or not, why not spend an hour (or 24) browsing a Forum of Ice and Fire?

Tywin's death seems pretty cut and dried, as far as Game of Thrones killings go: I mean, Tyrion just shoots him point blank with a crossbow on the toilet. Pretty tough to argue with, right? Well, as it would turn out, there's actually a fair amount of evidence pointing to the fact that Tywin may already have been dying when he was shot.

Much of the speculation comes from the ultra-detailed descriptions of Tywin's... er... post-humous stench, as described by Jaime and Cersei. (It's so bad Tommen even vomits and starts crying). I mean, sure, it makes sense that someone shot in the bowels would smell pretty rank, but Grand Maester Pycelle goes out of his way to explain how carefully he embalmed the former Hand of the King — so many eagle-eyed readers view this preternaturally awful stench as a clue that Tywin was poisoned. After all, it's only a few chapters earlier during Tyrion's trial when Pycelle carefully explains the effects of Widow's Blood, a poison that "shuts down a man’s bladder and bowels until he drowns in his own poisons." That definitely wouldn't do anyone any favors in the odor department, right?

There's also the fact that Oberyn Martell, a man nicknamed for his propensity for using poison, and singular in his goal to revenge himself on the Lannisters, made a lot of suspicious remarks about Tywin's lifespan: At one point, he point-blank tells Tyrion, “Your father ... may not live forever." What do you think? Could Oberyn have gotten the revenge he so deserved?

So the show pretty definitively squashed any hope that Talisa or her unborn child could possibly still be alive, but things are much fuzzier in the books: After all, Robb's book wife, Jeyne Westerling, wasn't even present at the Red Wedding. That, combined with some physical descriptions of her that don't match up (Catelyn Stark notes multiple times that she has "good hips," while Jaime observes that she has "narrow hips") have led some to believe that the real (and likely pregnant) Jeyne was switched out for a decoy — which means Jeyne and the Young Wolf 2.0 could still be out there somewhere.

3. Sansa, The Hound, Brienne, & Jaime Might End Up On The Battlefield Together

OK, this one's a bit of a stretch, but let's take a look at it anyway: In a nutshell, A Forum of Ice and Fire poster "God_made_me_do_it" posits that there's going to be an epic battle in Saltpans, between Harrenhall and the Bloody Gate. They theorize that Cersei will find Sansa, and ambush her with the help of Ser Robert Strong and the Kingsguard — but, luckily, Sansa will have the Brotherhood Without Banners (and with them, Brienne and Jamie) to protect her. Oh, and guess who else will come out of hiding to save his little bird? Yeah, that's right, the Hound. They then go on to conjecture that Ser Robert will kill Brienne, and Jaime will be so enraged, that he'll strangle Cersei with his golden hand (which, they also point out, is a fitting parallel to Tyrion strangling Shae with the Hand of the King's necklace), thus fulfilling the valonqar prophecy that's haunted Cersei for years.

It's a self-proclaimed crackpot theory, sure, but you know what my favorite part is? Well, according to "God_made_me_do_it," Sansa and Gendry will meet at the aforementioned battle and fall in love. I don't know about you, but I just found a new favorite crackship!

What with all of the Jon Snow conspiracies making the rounds, chances are you've heard a lot about the origin of the mysterious Night's King — and according to many of Old Nan's stories, "Some say he was a Bolton." This tidbit, combined with the Roose and Ramsay's general ickiness and untrustworthiness, lead some to believe that the Boltons might actually have mixed with the Others at some point — which would definitely explain a lot of the psychopathology of the family, right?

There are also the Boltons' famed flaying rituals to consider (they've been accused of skin stealing, which isn't so far off from wight magic, if you think about it), as well as father and son's shared trait of ultra-pale eyes (which are at one point, described as looking "like chips of dirty ice"). Interestingly enough, it was actually Ramsay's eyes that convinced Roose that he was, in fact, his natural son — and nothing screams "White Walker" more than disarmingly ice-like eyes, right?

5. Coldhands Is The Night's King

Thanks to the battle at Hardhome, we're all well-acquainted with the aforementioned Night's King (AKA Coldemort). Unfortunately, we're not quite as familiar with Coldhands, a mysterious figure who plays a larger role in the books. In a nutshell, he's a likely-dead and seemingly-benevolent individual who helps Sam and Gilly get back to Castle Black, and later aids Bran, Hodor, and the Reeds find their way to the heart tree.

He's helpful, yes, but all the characters who come into contact with him are quite unsettled by his deathliness — Bran notes that he doesn't seem to breathe, eat, or sleep, and there's also the matter of his... well, cold hands. There are a lot of theories as to his identity — and one of the most popular, is the idea that he could be the Night's King.

6. Tywin Knew About The Purple Wedding

Scandalous, but not really surprising when you consider how omniscient Tywin always was. Plus, when you think about how difficult Joffrey was becoming to control, and the fact that Tywin's not exactly a stranger to regicidal plotting, it almost seems downright likely. A Forum of Ice and Fire poster "Maester Gandalf" points out all Tywin stood to gain from the Purple Wedding — he'd get a much more pliant regent to control (also, one who still has 7 years left before coming of age), he'd get to send Tyrion off to the wall after framing him for the murder (regaining control of Sansa Stark as a bargaining chip in the process), he'd likely be able to force Jaime out of the Kingsguard and into an advantageous marriage back at Casterly Rock, and he'd also gain the power to able to marry off Cersei.

I mean, when you look at it like that, it's almost surprising that he didn't plan the thing himself.

7. Shireen's Sacrifice Will Save Jon Snow

While Shireen's death was one of the show's most controversial departures from the book's established plot, GoT book fans have been theorizing for years that Melisandre would sacrifice Shireen to R'hollor, and use the king's blood power to resurrect Jon Snow — as A Forum of Ice and Fire user "Stannis Lives" pointed out back in 2013 (psychic, much?), "It has just the right amount of credibility and GRRM grit." The post also points out, "It's dark, intense, consistent, powerful, and disturbing" — which is "right up GRRM's alley."

Well, it turned out the first half of their theory turned out to be true — so does that, coupled with the fact that Kit Harington was recently spotted in Belfast (where much of Game of Thrones is filmed), mean that Melisandre will indeed bring Jon back? It's food for thought, at any rate.

It's been a while since we've seen Bran and the Reeds, so here's a little refresher: Meera and Jojen Reed are descendents of Ned Stark's bannerman, Howland Reed, and they helped Bran on his magical journey, aided in particular by Jojen's own propensity for greenseeing. Basically, this theory posits that the weirwood paste (that just so happens to taste of blood) that Bran is forced to eat at behest of the Bloodraven to expand his psychic powers is actually... Jojen. As "starkloyalist" points out on the forum, Bran's strong negative reaction to the paste, paired with his visions of men performing ritual sacrifices, definitely looks suspect. Plus, the cannibalistic aspect fits in well with "a broader theme in Martin's work; that magic comes with a price."

What do you think? It's gross, but I buy it.

Now, this one's fairly obscure (especially if you haven't read the books), but it's so meticulously well thought-out that I had to include it. (Really) long story short, Meera Reed tells Bran and Hodor what seems to be a fairy tale about a small crannogman and the mysterious knight who protected him. If you look carefully, though, her story very closely lines up with what we know about her father, Howland Reed — and Lyanna Stark may have been his knightly protector.

It's a cool theory, and well-worth taking a look at, as it offers some rare insight into lives of the "dragon prince" (Rhaegar Targaryen), the "storm lord" (Robert Baratheon), the "quiet wolf" (Ned Stark), and of course, the "wolf maid" herself. Besides, dressing up in armor and competing in a tourney sounds like a total Arya Stark move, no? Like aunt, like niece...