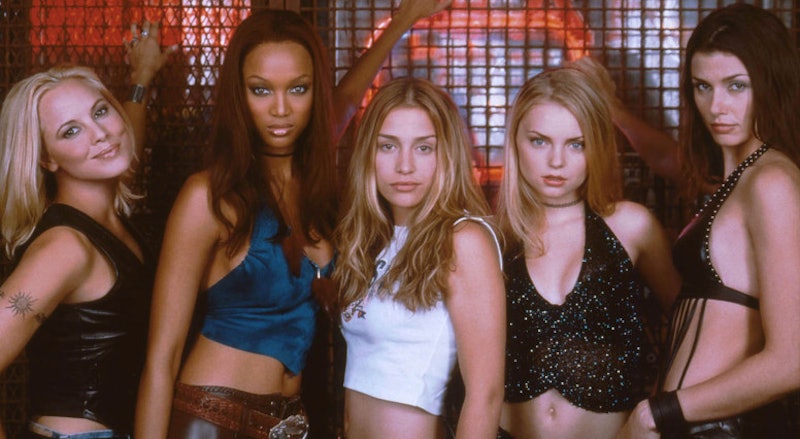 Truth be told, I was pretty obsessed with Coyote Ugly when it was released in 2000. Far be it from me to ignore a movie musical (with original tunes, of course). I saw it in the theaters and bought it on DVD the minute it came out. Coyote Ugly, named after the bar in New York City of the same name, is the tale of Violet Sanford, a songwriter from New Jersey who moves to Manhattan with aspirations of writing tunes that will be sung by the world’s best artists. The only problem is her crippling stage fright and the fact that the music business is virtually the toughest business to break into. What’s a girl to do?

Well, when all of her money gets stolen from her apartment, she gets a job at Coyote Ugly, a bar in which hot bartenders dance on the bar and funnel beer into people’s mouths. She makes money, she sends out her tapes, and she meets a hot guy, so it’s basically the trifecta of making it in New York. Not to spoil the end or anything, but she gets the guy and Leann Rimes to sing her hits. Order is now restored to the world. If you’ve seen the movie, you surely know all of that, but did you know these hot Coyote Ugly facts from the movie’s set?

The shoot for this movie took a whopping three months, during which the stars played a lot of chess. Adam Garcia, who played heartthrob Kevin in the film, admitted that he got beat — a lot — playing chess with Tyra Banks. Maria Bello wasn’t half bad, either.

2. Britney Spears Was Almost In The Movie

Both Britney Spears and Jewel were in the running for the part of Violet, but Piper Perabo beat them out. It’s no matter that Perabo couldn’t sing — Leann Rimes’ vocals were dubbed in for her.

Goodman is known for his acting chops, so it’s no surprise he mastered the Jersey accent needed to play Violet’s dad, Bill. But did you know he can do a great Aussie accent, too? Garcia spoke of having entire conversations with Goodman in Garcia’s native accent.

4. Cammie Was A Different Kind Of Dancer

Isabella Miko, who played Cammie, attended the National Ballet School in Warsaw and earned a full scholarship to the American School of Ballet in New York City when she was 15. Unfortunately, a series of injuries ruined her promising dancing career.

5. Bridget Moynahan Was A Little Too Tall

The set designers didn’t realize Moynahan was so tall in stature, so they had to adjust the Coyote Ugly bar set to make sure she didn’t hit her head during the dancing scenes.

6. The Soundtrack Was A Hit

“Can’t Fight The Moonlight”, the song’s main number, hit No. 1 on the charts in eight different countries. It also sold three million copies worldwide. I can’t say I don’t believe it — I still listen to those tunes all the time.

7. Some Real Hit Bands Played In The Film

The band playing in the club where Kevin works was The Calling, whose song “Wherever You Will Go” was a top hit a few years later. Also in the film? The pop-punk band Unwritten Law.

8. Adam Garcia Should Have Gotten A Musical Number

The movie was all about Violet finding her voice, but maybe the producers should have given Kevin a chance to shine. Garcia workshopped with Idina Menzel and Kristen Chenoweth to create the character of Fiyero in Wicked, and he also played Tony Manero in Saturday Night Fever on London’s West End.

Did you know all of those Coyote Ugly facts? You know you just can’t fight the moonlight.