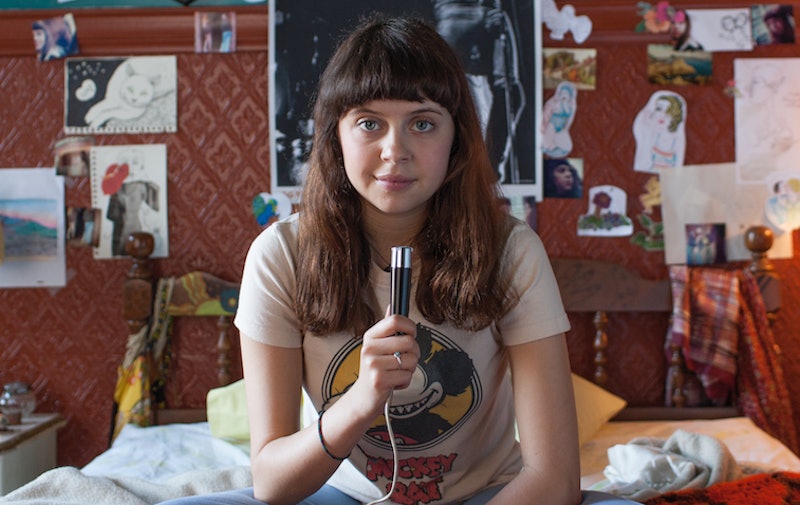 One of the best movies of the year stars a protagonist who's frustrated, determined, naive, impatient, happily sexual and sometimes just plain rude — all the ingredients we've come to expect from Walter White and very mad men, but not many women or people under the age of 18. So if there was a hero who was both those things? Well, that'd be a recipe for disaster — or, perhaps, a total stroke of genius. One only has to watch five minutes of The Diary of a Teenage Girl , a new movie starring Bel Powley as Minnie, an often-infuriatingly complicated 15-year-old learning to explore her sexuality, to realize that this exactly the kind of film Hollywood never makes — but is so, so needed.

"People nowadays, they’re scared of teenage girls," says the 23-year-old Powley, speaking with Bustle, on the lack of films about female sex. "Teenage sexuality among women is such a taboo subject."

And the same hesitance goes for movies about flawed teenage boys and their not-always-bright escapades, right? Um, not quite.

Says Powley with a blunt laugh, "They made a movie about a teenage boy having sex with a pie."

Yet Diary, despite — or because of — its "taboo" subject matter is already making a huge impact on pop culture. At this year's Sundance Festival, the film (out August 7) won rave reviews, picking up an award and distribution by Sony; in the weeks leading up to its release, critics have showered praise upon the movie and its stars, calling it everything from "gutsy" to "bold" to the not-quite-fitting-for-a-feminist-film "ballsy." The message is clear: people just can't believe that a movie like this — Starring a girl! Who has sex! And likes it! — exists.

In the film, Minnie's discovery and exploration of her sexuality comes with its fair share of setbacks — namely, her decision to sleep with her mother's boyfriend (Alexander Skarsgard). The 30-something is clearly more at fault for their affair, but Minnie is no innocent; she's old enough to realize that sleeping with Monroe will hurt her mother, and yet despite this understanding, continues to have sex with the older man. Over time, both parties develop real feelings for each other, and the sex becomes more than a simple affair; it's a complicated relationship, impossible to pin down as simply "good" or "bad."

"If I had gone into the filming process judging the scenes, or judging the relationships, then I probably wouldn’t have been able to be as truthful as I wanted to be in my interpretation of Minnie," says Powley. "One of the big things that Minnie learns in the movie... is that life is not black and white, and no relationship is black and white, and being human is the same — everyone has grey areas."

It's a lesson that doesn't come easy to Minnie, nor should it. Even after beginning the affair with Monroe, Minnie screws up often, lying to her mother, messing around with guys she shouldn't, following a friend into bad situations that can only end worse. At times, it's difficult to watch ("I felt really, really bad for Minnie," Powley says), and you want to warn the teen, give her advice, be the role model her hard-partying mother (Kristen Wiig) and absent father figure (Christopher Meloni) don't provide. When Minnie's explorations start spinning out of control, and she desperately needs to confide in her mother. she can't; Charlotte is too angry, too distant, too afraid of her daughter's transformation to help her through it.

"At the end of the movie, she’s gonna be okay," says Powley, "but she would be more okay if she could have a conversation with her mom about it."

Often, It's hard not to pity Minnie, especially when the affair with Monroe gets underway, but it's even harder not to relate. Powley, only 21 when she filmed the role, identified strongly with her character.

"When I was a teenager, my emotions were just as heightened as Minnie’s," she says. "I thought that sometimes I was the most intelligent person in the room... but it would go between that and feeling really un-valuable, really vulnerable."

"She confuses sex and love," says Powley. "That goes for most women... when you start having sexual relationships and having sexual feelings and it’s such a new thing."

The actress appears in nearly every scene of the movie, including several which feature her character having sex or examining her naked body. But Powley says that while the nudity may have been intimidating at times ("I feel like it'd be nervous for anyone to simulate sex wearing like, three band-aids," she quips), all of the sexual content was "right for where our characters were, emotionally."

Says the actress, "I remember getting my contract, with... the nudity clauses in it, and the first one I got was like, 12 pages long and I was like, oh, I don’t remember there being this much sex in it!"

But, she adds, "that really exercised as a positive thing, because if you can’t even remember it, then it can’t hurt you, and it wasn’t gratuitous."

The actress was more nervous about creating Minnie's on-screen life; she says she spent "a long time" perfecting the character's behaviors and quirks, everything from the music she listens to to the way she walks (not to mention her San Francisco accent — Powley is British). Her commitment shows; Minnie is one of the most believable movie teenagers in recent memory. She thinks like a teen; she speaks like a teen; she messes up like a teen, again and again and frustratingly badly. She's as real as it gets, and and an incredibly important creation, especially for the movie's adolescent viewers.

"The way that sexuality is presented is something I needed to see [when I was a teenager]," says Powley. "It’s not like she fixes all her mistakes... it's not about that. It’s about learning when you’re a teenage girl that you’re not going to be judged, you’re not going to be punished and the world isn’t gonna implode if you make mistakes. You’ll be fine, and you will go through this period in your life, and it’ll affect you how it affects you, and you will move on."

The Diary of a Teenage Girl, directed by Marielle Heller, will be released in select theaters on Friday, August 7.