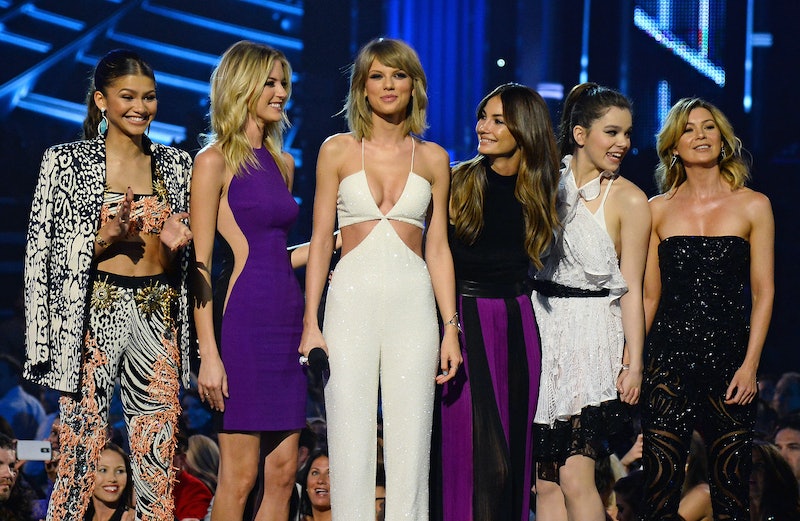 I've suspected Taylor Swift is not like the rest of us for a long time now. There are the obvious reasons: She pulls off a crop top way better than 99 percent of the population, she sends (expensive) Christmas gifts to her fans out of the goodness of her heart, she made the eighth wonder of the world that is the Bad Blood music video happen. But now? I'm absolutely convinced that she is not human and is some sort of angel walking among us. In her Vanity Fair cover interview — and the cover is totally badass, in case you haven't seen it — Swift admitted she doesn't care if her friends date her exes. This statement alone completely threw me for a loop. Donating money to families in need is one thing, but letting your friends date your exes? That goes against everything I've ever believed, and it's something I'm willing to bet most of us are incapable of.

It came out while Swift was telling VF about how much she loves her friends — normal stuff. And then, out of nowhere:

We even have girls in our group who have dated the same people. It’s almost like the sisterhood has such a higher place on the list of priorities for us. It’s so much more important than some guy that it didn’t work out with. When you’ve got this group of girls who need each other as much as we need each other, in this climate, when it’s so hard for women to be understood and portrayed the right way in the media. . . . now more than ever we need to be good and kind to each other and not judge each other—and just because you have the same taste in men, we don’t hold that against each other.

I still can't accept the fact that Swift thinks it's OK for her friends to date her exes. All I've ever believed is that exes are totally off limits, and I consider myself a pretty awesome friend. As Gretchen Weiners would say...

Being that most people I know — myself included — would completely flip out if one of their friends started dating one of their exes, and rightfully so. It's something I'd never expect my friends to do, and something I'd never do myself. To me, there are a million guys out there — why would I want to risk a friendship over one of them? That's just part of respecting the people you care about. And if my fiance and I ever called it quits, I'd be horrified if one of my friends started dating him. It's just human to feel that way. So normally, I'd be totally willing to call Swift out for being totally full of it... if there wasn't already evidence that she practices what she preaches.

Because remember the time this photo happened, shortly before it was confirmed that Joe Jonas and Swift's bestie, Gigi Hadid, are dating?

If you remember the great Swift/Jonas breakup of 2008, you know that it's a very big deal that these two would ever be hanging out together. So when I first saw this picture, I thought, "Wow. Something crazy's going on there. Either there was some big, emotional talk between Swift and Jonas And what is Calvin Harris thinking? This has to be weird for him!" But maybe it's not that serious. Maybe Swift and Jonas are just two people who dated a few years ago and now that he's with one of her close friends, Swift has realized she loves Hadid enough to extend her hospitality to him, too.

Yep, It's official. Either Swift has reached some higher plane of existence that the rest of us could only hope to reach in our lifetime, or she's sucking it up for Hadid's benefit. I choose to believe she's just superhuman. After all, how else could she look that good in a crop top?