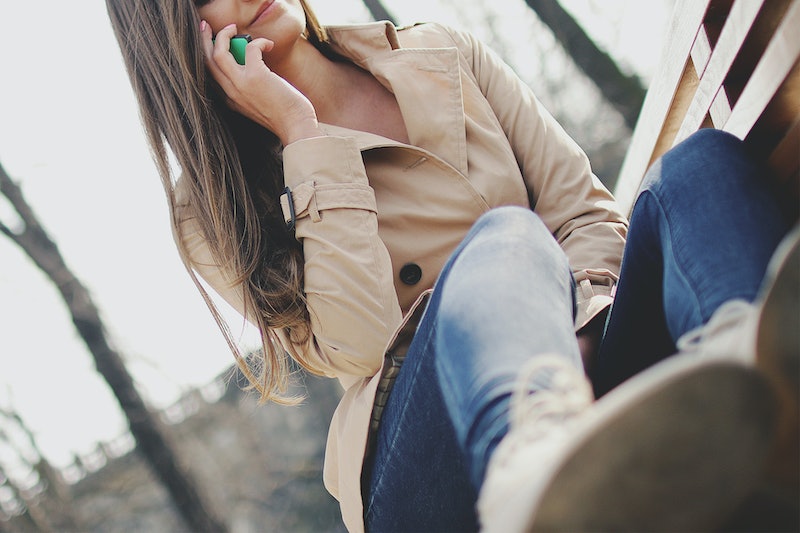 Ghosting, as you probably know, is the wholly unpleasant phenomenon when someone you are dating decides to simply fade away into the ether rather than have an upfront, honest, adult conversation about why he or she no longer wants to keep seeing you. If you're actively involved in the dating game — particularly online dating — there's a solid chance you know exactly what I'm talking about. If you've been on the receiving end, you know that it's a confusing and frustrating experience that most likely left you wondering why people ghost in the first place. Despite the fact that there are many other, better ways to break up with someone, it seems that people can't seem to retire the pesky habit of ghosting.

If you're a newcomer to the ghosting scene, I would first like to offer my condolences. It's never easy to wrap your head around why someone would cease all communication and pretend you don't exist — at best, it's mega-frustrating and, at worst, it's degrading. Though there are endless reasons why someone might opt to ghost, chances are, the guy or girl in question is simply trying to avoid conflict or awkward questions about why things aren't working out. Sure, it's immature, but unfortunately there's not a lot you can do about it except hold your head high and move on. (And although it's not ideal, there are actually times when it's totally OK to ghost someone.)

It may sound cliche, but if someone wants to date you and/or hook up with you, they will make an effort to see you and talk to you as much as possible — flakiness and shadiness never bode well of a healthy, blossoming relationship. If you're in a fairly new relationship and are worried Potential Bae is about to back out, check out these seven signs that could forewarn you that the person you're seeing is about to go AWOL.

No one likes to play texting games ("I'll wait two hours to respond because I don't want to seem too eager"), but it's also a red flag if you consistently feel like the only one to initiate contact. There's nothing fun about waiting to see if someone reaches out to you, only to realize after a couple days that it seems unlikely, so you just give in and text first again, against your better judgment. If you see a pattern and truly feel in your gut that they're uninterested, beware that this person could easily just cut off all contact with no notice.

If every time you hang out, he or she suddenly has a reason to disappear even though you've only had one drink, there's a chance that they're mentally preparing to hit the road. Why would they meet up with me in the first place, then? you might ask. There's a possibility that they're hoping for a hookup, or that they're simply biding their time and appeasing your desire to see them before making the Big Exit. Not that every date has to turn into a 24-hour sleepover followed by brunch, but if you're always left wanting more when they cut and run, it could mean they're not that into you.

3. They Vanish From Dating Apps

This is a tough one, because if things are genuinely going well, someone might deactivate their Tinder or OkCupid because they like you a lot and want to stop the search. But if, in general, they're flaky or unresponsive towards you and you notice they've abandoned online dating, it might mean they're trying to literally disappear on you. If you can't reach them post-ghost via text or OkCupid, it's much easier for them to avoid your questions. Similarly, if they constantly disappear and reappear — either on dating apps or in your inbox — it's clear that they're indecisive and haven't yet made up their mind about whether or not they want to date you (or maybe date, period).

Repeat after me: "If a guy/girl wants to see me, they will, no matter how demanding their schedule is." Seriously. If I text someone and ask them if they want to hang out in the near future, I fully expect an interested person to say, "I'm free on this day at this time." If I request a specific day and they're unavailable, I fully expect him to say, "Sorry, I can't that day, but how about this day?" It's not hard to make plans, and even if you're busy, you should be able to find some time that works for both of you.

5. They Feign Deafness When You Mention Hanging Out

Alternatively, you could be with someone who flat-out ignores any mention of a date. If you're texting someone and they're totally keen to chat with you but somehow miraculously don't see your next three texts about grabbing dinner, that's a warning sign. Maybe they just want the convenience of a hookup buddy without any of the actual work, and if that's not what you're looking for, you might be better off finding someone who seems eager to see you IRL.

6. Their Texts Are Short And Simple

This is the unofficial precursor to ghosting. Maybe things were going swell at first and the two of you had long, memorable conversations about your college days or family life. But then after a couple dates, you noticed he or she getting shorter and shorter with you. Not to be dramatic, but I'm almost positive that this is always a sign of bad things to come. Sure, every text doesn't have to be a novel, but if you feel like you've had longer conversations with Siri than this person lately, there's a chance they simply lost interest and are now bringing communication to a slow, painful stop.

7. They Have An Arsenal Of Far-Fetched Excuses

I once was attempting to plan a date with a guy whom I had yet to meet, and out of the blue, he came up with some wild story about his mom having a stroke and then I never heard from him again. To be fair, this might have been true (in which case I am mortified), but I am 99 percent sure that it was a fabricated story, because the timing was just too bizarre, and he had already canceled on me once before. If you're with someone who repeatedly seems super pumped to hang out and then cancels at the last minute because their dog fell down the stairs, they got their foot stuck in a sewer drain, etc., it could be a sign that they're just flaky AF and might soon just cease talking to you altogether.

More like this
Are Quality Time & Gift-Receiving Love Languages Compatible?
By Lexi Inks
The 19 Best Tweets & Memes About Bisexual Awareness Week
By Lexi Inks
30 Clever Ways To Slide Into Your Crush's DMs
By Griffin Wynne, Carolyn Steber and Lexi Inks
10 Ways To Be More Empathetic To Your Partner
By Raven Ishak and Lexi Inks
Get Even More From Bustle — Sign Up For The Newsletter