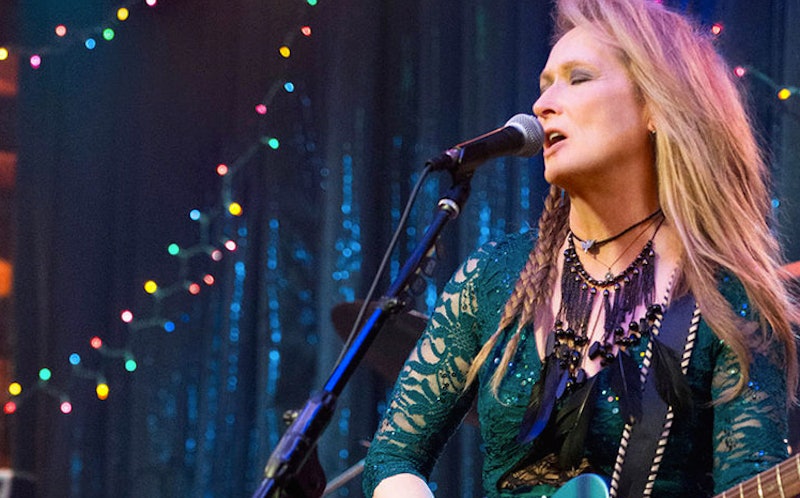 Another year, another fantastic Meryl Streep performance. This summer, the Oscar-winner graces us with her presence in Ricki and the Flash, and the film is special for several reasons: it features Streep's real-life daughter Mamie Gummer; it shows off Meryl's actual, killer guitar-playing abilities; and includes some truly amazing music. Some of the songs performed in the film are covers of real hits, such as Bruce Springsteen's "My Love Will Not Let You Down." But the film's most powerful song, "Cold One," has never appeared on a "top hits" list from any famous rocker. So who wrote "Cold One" in Ricki and the Flash ? Could it be a ghostwriter? Director Jonathan Demme? Meryl Streep herself?

The answer is actually pretty cool: "Cold One" was written by Jenny Lewis, singer-songwriter extraordinaire, and her esteemed collaborator Jonathan Rice. The duo previously worked with Jonathan Demme on creating the soundtrack for his film Song One, and Demme was so impressed with the result that he was eager to include them in his new project.

The director told Billboard that he reached out to Lewis and Rice and asked, "Could you please read the screenplay and see if you can figure out a song that Ricki would have written?" The songwriters read the script, and Lewis deeply related to the narrative's exploration of a troubled mother-daughter relationship. She herself was the daughter of musicians and as a child often felt that she placed second to her mother's musical pursuits. But now that she is a famed name in music herself, Lewis could also relate to the conflict of trying to balance an artistic career with commitment to one's family. "I’ve been on both sides,” Lewis explained to radio.com. “I felt like it was something I knew well." Check out this scene from the film, in which Ricki plays an acoustic version of the song for her ex-husband (Kevin Kline) and daughter (Gummer).

After reading the screenplay, Lewis and Rice spoke with Streep to get the actor's insight on her character. After that, they said, the lyrics came easily. Isn't it gorgeous? Lewis and Rice's work is a heartfelt track performed with genuine feeling by Streep, and it begs to be listened to over and over — perhaps, if all goes well, by Oscar voters. "Cold One" is undoubtedly a highlight of both the Ricki sountrack and the film itself. And Ricki and the Flash is undoubtedly a highlight of 2015's cinematic offerings thus far. You can see a music video set to scenes from Ricki and featuring the beautiful song below:

More like this
The 'Love, Lizzo' Harry Styles Scene Is Just 1 Moment That Made Fans Feel Seen
By Brad Witter
This James Bond Event At Abbey Road Studios Was A 007 Fan's Dream
By Samantha Rollins
The Fan Whom Adele Scolded For Using A Filter On Their Selfie Has Something To Say
By Radhika Menon
North West Has Mastered The Wednesday Addams & Lady Gaga TikTok Dance
By Jake Viswanath
Get Even More From Bustle — Sign Up For The Newsletter